"Tunnel"investigated the dark disappearance of the farmer in Serres.
Share

Nobody perceived the new thriller in Vergi for days.

Man, tractor and a platform literally disappeared as if by magic, on a straight main road.

The farmer Thanasis Polychroniadis,  was lost in the afternoon of Monday 29 October.

Surveys from the Serres Police, as well as the effort of volunteers who started late but organized, did not light up the dense darkness …

The original version of the accident is now blocking another that is being strongly discussed in the area: The unlucky farmer fell into a trap of death …

“Tunnel” was found in the place and recorded the path of mystery from the oil mill where he was the fateful afternoon before he got lost.

Detected and presented video – documentary by a security camera in the area, which recorded its last trace, just a few hundred meters from the entrance of the village …

What did the family saw in his house…

Important was what revealed in his telephone conversation with the show, relative of the missingman  Theodoros Aliatidis.

“What impressed us  was that his house was clean and a  cigarette was  in the ashtray, as if someone had arranged the room, something his daughters usually did. Unfortunately, the cigarette was not collected for DNA, nor was the house examined for fingerprints. He also used to leave his tractor in a shed and the platform in the yard. We found a mark on the wall of the warehouse that did not exist before. As someone led the tractor without knowing the space and hit the wall. Neighbors say they did not see the tractor to figure out the disappearance. The yard is visible from the road.

We also found that his mobile phone, which he always had with him, was found inside the house and the calls had been deleted. We also found the key of his  house hidden somewhere completely different from where he usually was puting it.

Unfortunately, we did not realize his disappearance in time, despite the frequent communication we had. It is unprecedented to lose a tractor as if it was a pin “.

Retired police director Thanasis Katerinopoulos, who was found in e Tunnel, commented that the missing farmer as he asked for help to load the olives on the tractor’s platform would wait for  someone who would  help him unload. 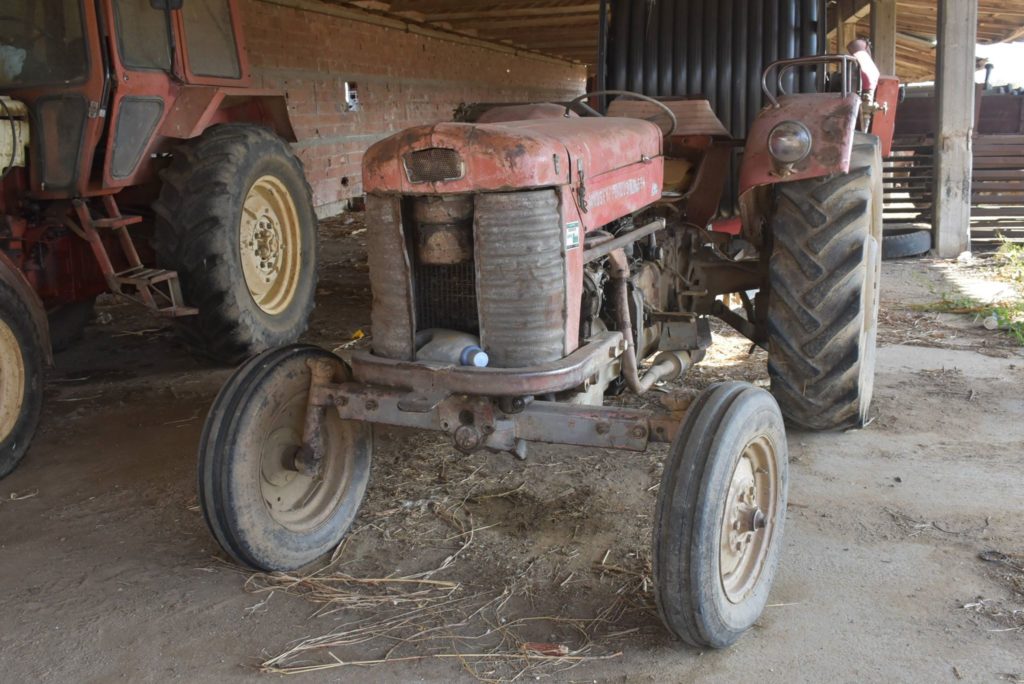 On a live connection with  “Tunnel” via Skype, the journalist from the Serres TV network, Stefanos Tsaveas, said:

“The investigation of this strange case has been undertaken by the Police of Serres and the investigations have already begun in the context of the preliminary investigation. Authorities have searched on a long radius, and they dropped underwater camera to Strymonas river to find even a trace. The police are now investigating all possible cases and given a mandate to lift telephone and banking secrecy. ”

The reporter also said that the surrounding streets have been checked, but they have been excluded from the research microscope.

During the show a new document was presented around the case. This is a photo of Polychroniadis taken by a security camera at the oil mill at about four o’clock and about ten in the afternoon. In it the farmer is distinguished on his tractor and the clothes he wore.

His first spot was recorded on Monday 29 October at ten and fifty-three minutes in the morning. It seems clear he was driving his tractor and on the platform there were loaded white sacks with his olives. At the end of the line, turn left towards the oil mill. 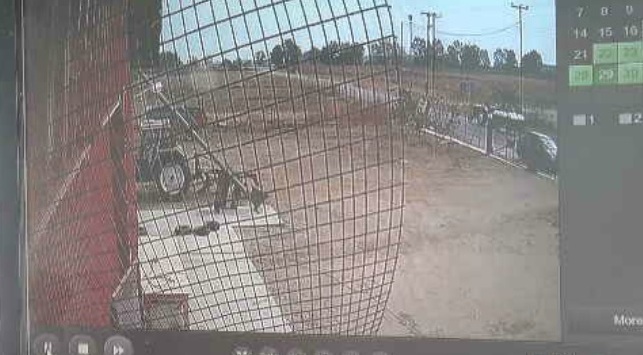 Later at quarter to seven in the afternoon, the same camera records him returning to the village with the front lights on. The time fits perfectly with the time witnesses said he left the oil mill. 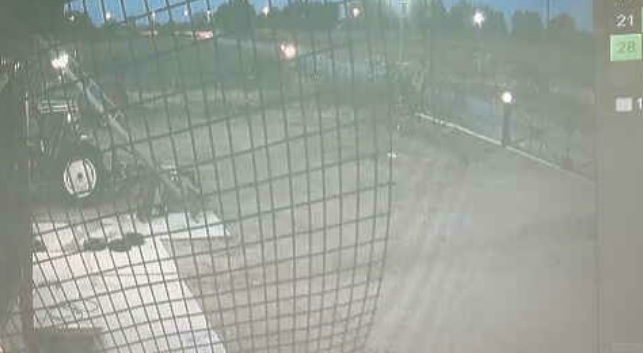 I did not realize he was missing

“Tunnel” spoke with the witness who first realized the absence of Thanasis Polychroniadis.
He said he had helped him load the sacks with his olives on the tractor platform three days before he disappeared. The two of them had previously arranged to meet to pick up other olives on Friday 2 November.

The previous evening on Thursday, 1st of the month, the witness who is a relative of the missing person went to the café to watch a football match. There, a neighbor told him that Polychroniadis had not been seen. At first he thought that because he was injuring his leg he might have gone to a doctor in Serres. The following morning he was upset and informed  his daughters.
He told Tunnel that despite having worked in rural jobs, they did not have daily contact. He also claimed that though he is living close to Polychroniadis, did not call him to unload his oil, nor did he tell him if he intended to give it somewhere. The fatal night that disappeared did not hear the tractor’s sound as he slept early.
“I do not think  the tractor came to the village … This is not explained. We were not just looking for people for so many days, we were looking for tractors and platforms. We have plowed all the mountains and streams … “, he said. 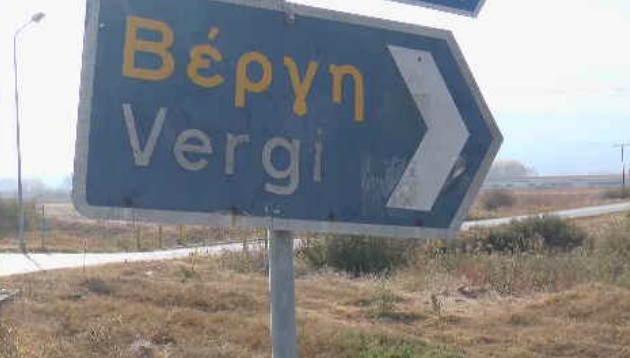 On the route of mystery …
The olive oil employee showed Tunnel the road that the farmer had driven when he left . This provincial road leads to three directions. Straight to Nigrita, left for Ligaria and right to Polychroniadis village Vergi, which is approximately three kilometers away. 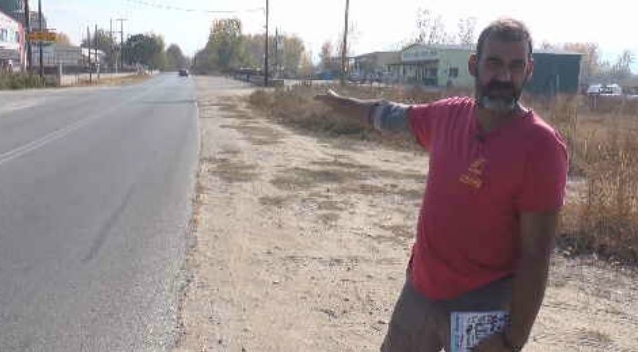 The reporter followed the same route and recorded it with the camera.
Shortly after the intersection for Vergi, a local business security camera recorded the last footprint of the retired who was headed to his village.
Tunnel spoke to a friend of Polychroniadis, who, on that  fateful afternoon, while he was returning with his son from Thessaloniki. It was after six and a half when he saw the missing person safely turning his tractor at the junction for their village.
The inhabitants of Vergi cannot believe that it is possible a human being with a tractors to disappear.
“I hear his dogs and I am thinking  he returning  to his house. So many days and nothing was found. I believe that behind his disappearance it might be hiding robbery and murder, ” told the Tunnel a neighbor of the missing person. She has sent a dramatic appeal to anyone who has seen something to talk to find a solution to this odd puzzle. 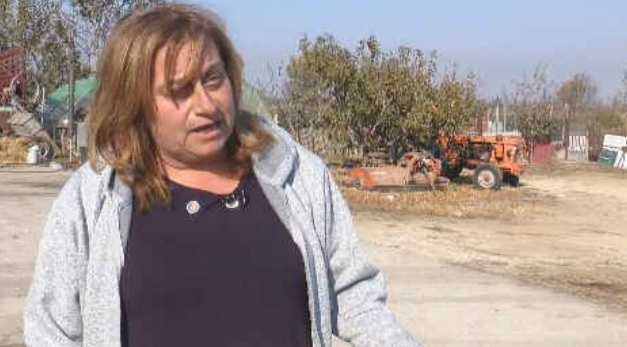 In the mill before he got lost …

The owner of the facilities and his relative who met him that day spoke to “Tunnel”. He stressed that he was joking , in a good mood and stayed there for several hours. Among other things he told her he was organizing his farm works for the next few days.
The same image was also shown by the olive oil employee  who helped him load the two red jerks with one hundred and forty kilos of oil on the tractor platform with which he disappeared.
Around six o’clock in the afternoon he left alone, following the main road between Samia-Dimitritsi, leading to his village Vergi.
He wore black form, blue and green plaid shirt and white shoes.
The owner of the olive mill was informed about the disappearance five days later from a relative of Polychroniadis. He told her that the missing person did not go find him for the agricultural jobs they he had planned. He did not find him at his house, nor saw his tractor anywhere, and then he informed his  daughters.
“It is very strange that neither the tractor was found. It is a big, lustrous vehicle, URSUS brand written in white letters, with a middle platform with front lights. God help him he  was a good and quiet man, “the owner said.

Thanassis Polychroniadis, 86 year old, has been missing since the afternoon of Monday, October 29, from his village of Vergi, Serres. He was driving an old red Ursus tractor, with registration number SP-6714. In the back there was a customized orange platform in which she had loaded two red jets with 140 kg of oil.

The missing person has a height of 1.72, is thin and when he was lost he wore a plaid shirt, dark blue trousers with a jacket with a collar collar, jockey hat and black shoes.