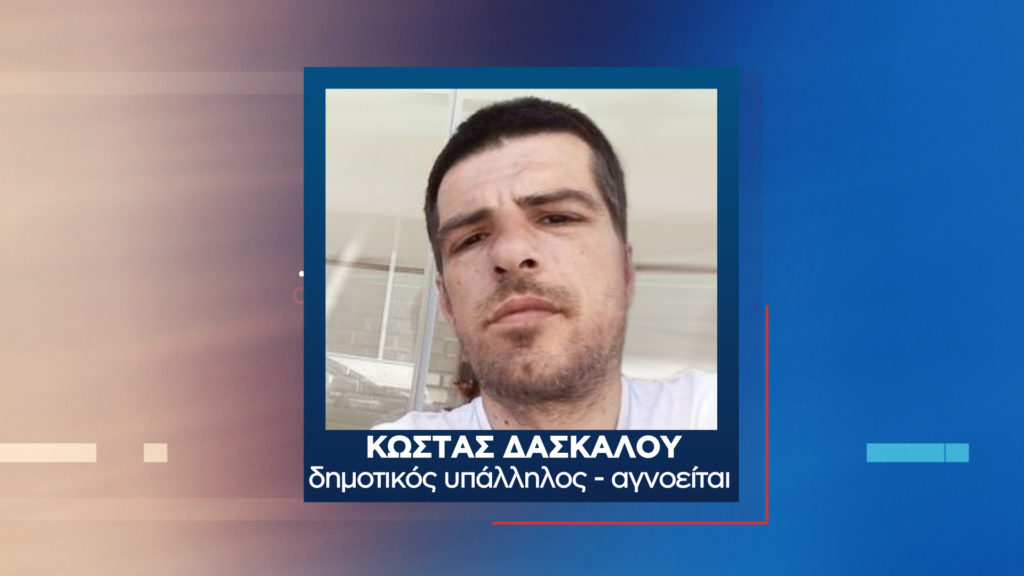 Mystery covers the disappearance of a municipal employee in Kavala.
Share

That morning, Tuesday, November 24, he left home for work. His father found him unconscious on the street, while police officers were standing next to him waiting for the ambulance.

It took twenty minutes for everything to change and since then their Calvary began.

Costas Daskalou, 40, according to an investigation, refused to be taken to the hospital and disappeared before their eyes.

The great mobilization of authorities and volunteers in the wider area was fruitless.

The father: I saw him unconscious before he disappeared…

Volunteers and the father of the missing municipal employee spoke on the camera of the “Tunnel”.

“We entered tunnels and ravines to look for him, but nothing,” said the commander of the commandos, who took part in the investigations.

“He greeted me that day and told me he was going to work. He left on foot to take the bus and a few hours later I received a phone call that he was found unconscious somewhere. At this point he was lying down and next to him police officers were waiting for the ambulance. I left for a while to get my card because I would need it and when I returned, he was gone. The police told me that EKAB took him. When I called the A&E, they told me that they did not hospitalize anyone with that name,” said Kostas Daskalos’ father.

The mother: We were told that he was thrown on the rocks…

“The antenna located in the area of ​​Aspri Ammos recorded the last position of his mobile phone. We carried out searches in the wider area”, rescuers report on the show.

His mother said at an emotional state:

“We talked on the phone that day and he told me he was going to work. We were told he was dead and he had been thrown away. We are investigating whatever information they give us, I do not know what else to do. ”

“I saw him that day, he was wearing his work vest. There are many wells in the area. He is either drowned or he has been killed. I found his shoe, the other one was taken by the dog,” a resident of the area of the disappearance told the “Tunnel” camera.

“His cell phone hung up the same day…”

“We searched for abandoned buildings, greenhouses, fields, the camp and along with other groups from another side, but we did not find anything strange,” a reserve commander who took part in the search, told Tunnel.

The father of the missing municipal employee said:

“The same night I called him, his cell phone was switched off. I called an acquaintance and he told me that he did not meet him that day and that the previous day they were together. I do not know where he was in the hours before he disappeared, but he did not go to work. ”

Girlfriend: I beg he is not found dead…

A child friend of the missing person also spoke on the show.

Among other things, she mentioned:

“Kostas wanted to be educated and acquire knowledge. He was very sociable and a many people love him. He was quiet and would never provoke. I do not know what may have happened; I just wish he is not found dead somewhere. I want to hope for the best. There are many of us who are worried about him.”

His sister referred to his studies, which he was still pursuing, along with his work, and appealed to him or anyone who knows anything to contact them because they are very anxious.

“He wanted to become a mechanical engineer. He wanted to learn many things and move on with his life. All we are asking for is a sign of life from him, a message that he is well,” she said characteristically.

“I saw him running…”

The “Tunnel” looked for the two friends of the missing person, with the question if they saw him the day he disappeared.

The first one said on the show:

“As I said in my statement to the Police, the last time I saw him was on Monday after work, at noon. As I was going home, I saw him running down and I shouted at him. He told me he had somewhere to go. I found out about the disappearance when his father came to ask me if I saw him. On Thursday I think. We had an acquaintance, I asked him, but he did not tell me anything”, he stated characteristically.

“We did not meet that day…”

The show located and talked to this young man, his second friend.

“Kostas and I were friends for many years. I think if he there was something concerning him he would tell me. There was no misunderstanding and no quarrel between us because here, a lot is being said. Last communication with him was on Monday afternoon, one day before he disappeared. He was to come to my house to bring me something I had asked for, but in the end he did not come. We did not meet that day he was lost. He was generally a person who did not make a fuss, did not chase misunderstandings. He was calm. He was not arguing with anyone”, his friend told.

The missing person has short brown hair and his special feature is a scar on his left hand.

On the day he disappeared, he was wearing a work uniform with the inscription “Municipality of Kavala”. His jacket was orange with black details.

It has a height of 1.85 and for his disappearance the social alarm Silver Alert has been activated.