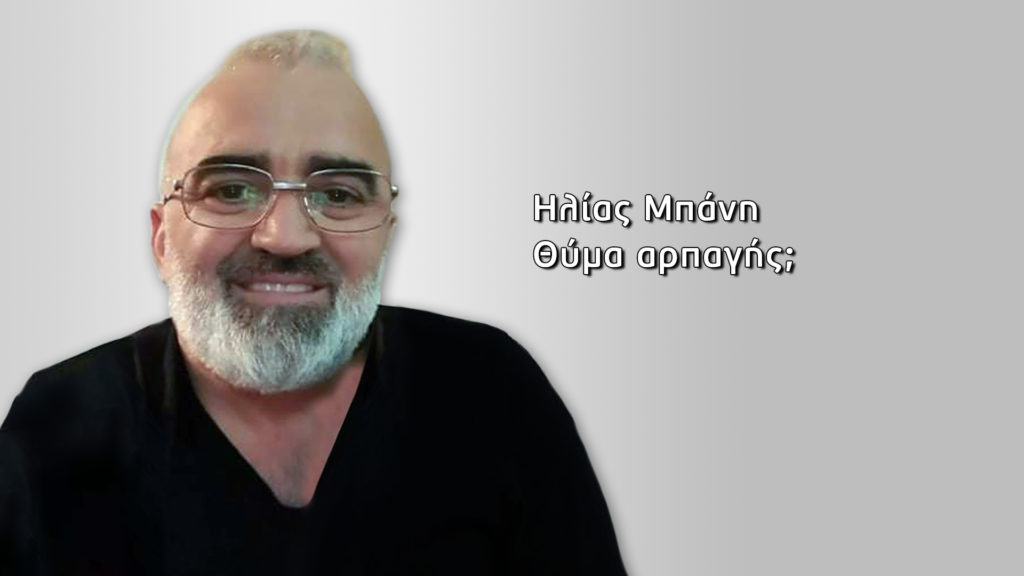 A new thriller for strong nerves took place in the garage of an apartment building in Zografou. The "Tunnel" brought to light all the details of this strange disappearance, which occurred at noon on Wednesday, October 28, 2020.
Share

The partner of the businessman Elias Bani, 50 years old, spoke about abduction and with the fear of taking over, she appeared on the show with her features covered. All this time, with the help of private investigators, she was trying to find out what happened to the father of her children. When she found herself in a dead end, she reached the “Tunnel”, hoping to find out the truth.

She considers that strangers set a trap for him in the underground garage of the apartment building where they lived him and abducted him.

The black jeep, which he was driving on that rainy day, was found in the place where it was parked, while in the trunk there were the shopping bags he had bought a little earlier from a grocery store in Pagrati.

The cell phone they were talking to was found on the dashboard and the keys to the house were dropped to the side, between the driver’s door and the seat.

During the show, some serious information arrived, which will be given competently.

She describes in great detail the last moments, just before the disappearance.

“He was talking on the phone with someone who had made an appointment with him. He was at the door, he turned, kissed me and the baby and left. We talked on video call while he was at the grocery store and he was shopping some things for the house. He told me he was coming to eat and that was the last contact I had with him. Then I called him repeatedly, but in vain. When the time was 20:00 and I did not have any news of him, I was afraid he might have crashed,” she said.

The puzzle would have been solved if the camera was recording…

The “Tunnel” recorded the course followed by the father of four children, until he entered the garage of the apartment building and his traces were lost.

“The car keys were not found anywhere. Opposite there is a gallery with security cameras. From there we tried to see if his last moves were recorded or who followed him, however due to a technical problem, the material was not stored. There is a supermarket in the neighborhood that has cameras, but they did not help us.”

She also described the moments of agony she experienced going out on the street looking for him.

They set a trap for the businessman in the garage…

Speaking to the TV crew of “Tunnel” through the garage, where this incredible story unfolded, she gives the details.

“Police have taken fingerprints and genetic material from the car, but I do not have a picture. From the beginning they were completely indifferent. It was raining that day and as soon as his cousin and I got to the spot, we went down to the parking lot again and saw the raindrops on the car, which means that it was not long before he returned. I think it is very likely the scenario that they surprised him as soon as he parked. If he left here alive, he would leave something behind,” she said, full of anxiety.

“We just want to find him. He does not deserve silence…”

All that his partner is asking for now is to put an end to the anguish of both her and their children.

“Since the disappearance of my partner and afterwards, from his friendly environment, they do not talk to me. I cannot interpret this. I wanted to address your show for a long time, I did not want so much time to pass, but the decision was not my choice. I’m very scared. The main reason I am looking for him, apart from me, is because of what I will say to my children in the future. Our eldest daughter is closed in on herself. I have caught her many times after the disappearance, looking at his photos and sending him messages crying. It is hard for all of us “, she stated characteristically, while she stressed that all they want is to learn the truth.

“If he has not left alone, he did not deserve such a thing, he does not deserve silence. If there is anyone who knows anything, contact Ms. Nikolouli’s show, because it has been proven many times that she can and does protect witnesses. If something has happened to him, I just want him to be found, to have somewhere to cry for him. I do not want him to be thrown somewhere. Our children give me the strength to keep going.”

“Before he disappeared he was here and the cameras recorded him…”

The camera of the show was found in the food store which was the last confirmed position of the missing businessman. Security cameras recorded him shopping for some things for his house, as usual. Then he got in his car, left Filolaou Street and from there no one saw him again.

“He came alone and I was impressed because he usually came with his wife and daughter. He had parked his car a little further down. We usually helped him and took things to him in the car, but that day he did not want help. I have heard that someone may have been watching him, but I do not know anything. He was generally a pleasant man, it was probably the only time I saw him somewhat out of tune and worried, I do not know if he was worried about anything,” said the employee who served him on the day of his disappearance.

Elias Bani, 50 years old, has a height of 1.75, short white hair and on the day he disappeared he was wearing dark brown pants, a black short-sleeved blouse with white stripes on the front, a thin black jacket and dark blue shoes.