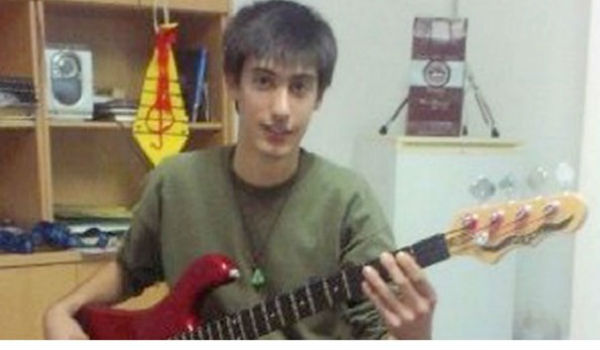 The trial of the case of the murder of the young musician from Santorini, which shocked public opinion, was postponed for early in September.
Share

The decision was taken by the Joint Court of Samos on the morning of Friday 30 June, due to the absence of important witnesses.
Tragic figures the mother and brother of Takis Vazakopoulos, 21, who were found early in the Courthouse together with their lawyer Alexis Kougias.
In his statements Mr Kougias said: “At the request of our defense advocates, we agreed to adjourn the trial, after the absence of  important witnesses. I believe that this development is in the interest of the case. ”
With tears in her eyes and supported by her son Alec, the mother of the unlucky young woman, Maria Damascinou, who was obviously overwhelmed, constantly asked ” I want to know where is my child where they  had buried him …”.
The alleged perpetrator and “friend” of the unfortunate young man, accused of his manslaughter intentionally in a quiet mental state, appeared in court particularly provocative.
“Neither the best actor would play such a role. He laughed and he  was like he did not do anything, ” said to “Tunnel” the aunt of the victim Argyro Georgiou.
“We’ve arrived here thanks to your show. We believe that Justice will do its job. But something else  is  burning us. We ask them to tell us where is even a piece of our child. I hear parents who have lost their children but they go to their memorial. We don’t have a place to go and grief.” she ended up crying.
The murder of Takis Vazakopoulos was revealed in Santorini three months after his disappearance on August 7, 2014.
After his uninterrupted search and revelations of the Tunnel, his Bulgarian friend was called for a new testimony because he fell into contradiction. He committed the crime, but immediately recalled.
He was finally arrested after one year and a half. The body of the unfortunate young man has not been found to date despite research in the dump, but also in other areas of the island.