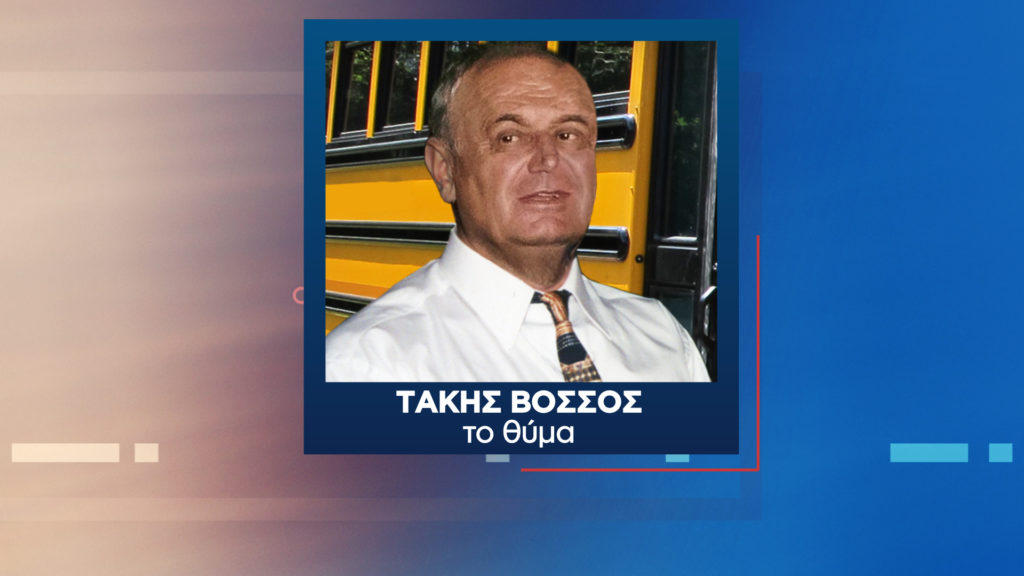 Authorities proceeded to arrest the perpetrator of the murder of 64-year-old school bus driver Panagiotis Bossou, who revealed the "Tunnel".
Share

This is a 43-year-old friend and fellow driver of the unfortunate Panagiotis Bossou, to whom the victim had even lent money several times.

The men of the Northeastern Attica Security, who were investigating the case, followed the flow of money and soon found out where the purchases that had been made from the account of the unfortunate driver ended.

The perpetrator had deceived the victim and had opened an e-banking account with his details, through which he was making purchases. When Bossos realized what was happening to him, he invited his friend and colleague to the kindergarten, to his house in Vrilissia to talk. There, the perpetrator, as he stated in his confession, persuaded him to follow him in his car and they went together to the area of Agrileza, Sounio, to talk.

They went up to the Dianthos fire station, which has been recorded by the lens of the “Tunnel” that was found in the area when the body of the unfortunate man was located. There, the 43-year-old confessed that he was responsible for the fraud and embezzlement against him, they fought and as they were going down the stairs, the perpetrator pushed him, the victim fell with his head on the ground and remained unconscious.

The killer then took a sheet he had in his car and strangled it with this Boss, making it up, something that did not result from the autopsy-necropsy when the body of the victim was found on New Year’s Day.

The perpetrator confessed and a relevant case was filed against him.

An official announcement was issued for the case by the Police stating:

“The Security Sub-Directorate of Northeastern Attica investigated the case of the murder of a 64-year-old native, whose body was found on 1-1-2021 in the area of Agrileza Lavriou.

The body was located after a thorough police investigation, which revealed evidence of involvement in the case of a 43-year-old citizen.

With the assistance of police officers of the Department for the Prosecution of Crimes against Life and Personal Freedom of the Attica Security Directorate, the 43-year-old was located, brought for examination and identified as the perpetrator, while the motives of his act were determined.

A case file was formed for the case, which was submitted to the Athens Public Prosecutor for Criminal Procedure and was referred for main investigation. A warrant was issued against the 43-year-old, under which he was arrested today “.

The first reaction of the victim’s brother in the “Tunnel”…

Takis Bossos’ brother spoke exclusively to “Tunnel” about the investigation of his murder.

“The killer has been found and he has been arrested. He was a colleague, a school bus driver at the same school. He is the one who took the money from his account. He claims that he took him on Sunday morning in order to tell him what he wanted. They went for a walk to Lavrio and there they got into a fight, that’s what the Police told me. He pushed him and fell down. He waited for him for about ten minutes to see if he recovered from the fall and since he did not recover, he tied him with a bed sheet and dragged him to a nearby cave. As he had tied him to the sheet, he had already died. I had never met him at his house, but one of my cousins ​​had seen him there. Although the end was painful, at least I think you contributed to the whole effort,” he said.

The nephew of the unfortunate school bus driver stated that the show helped significantly in the outcome of the case and that his soul will now be able to rest.

“Fair, unfair, good, bad this thing happened and we know at least who did it. But why did he decide, after he did what he did to throw him in a cave as if he was nothing. These things will never be answered. I cannot, as much as I try, understand what has happened… I cannot believe that this man is carrying and was carrying children until yesterday. If he is not ashamed of himself, what can I say… My uncle did not enjoy his life because he was keeping the money; he was keeping it so he has something to deliver in this life. He never bothered anyone, he never said bad things about anyone and he came into this life, he passed and left without enjoying anything. Without having joy and happy moments. A man decided because he wanted it, to do what he did. The only people who spoke to me most clearly were people from your show. I think that after the first time passed and after we got to the point where the issue got bigger, many people were forced to speak, which really helped. The fact that we were looking to find someone who would believe us in the Greek Police played a crucial role. Thank you very much and I hope Justice is being delivered.”

See details of the case HERE.