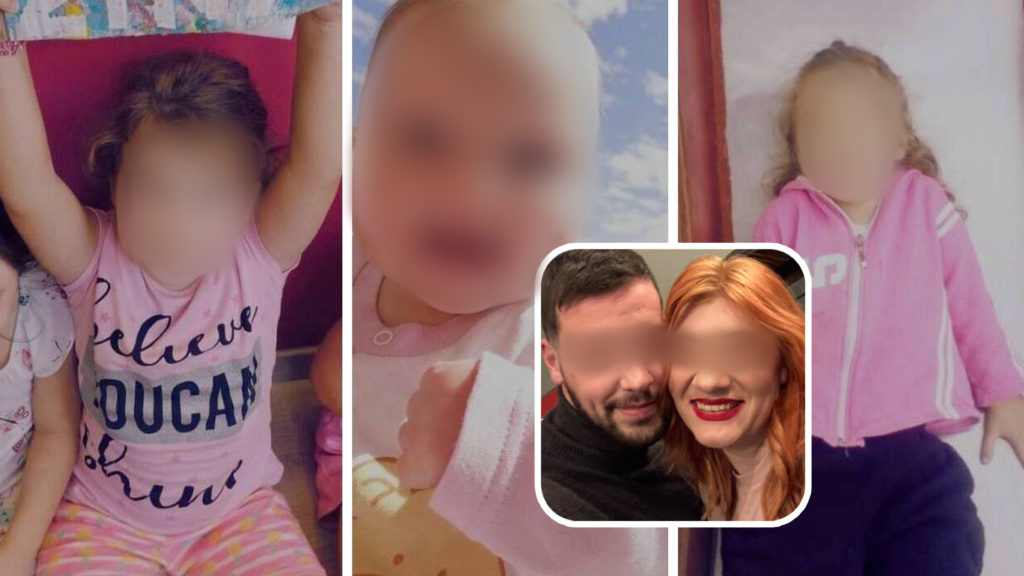 The mother of the three little girls in Patras, spoke to Angeliki Nikolouli about the tragedy that struck her home.
Share

In a period of thirty-three months she lost her three children, aged from 6 months to 9 years. The deaths were characterized as strange and with the order of the prosecutor, are being investigated by experienced police officers of Attica Security.

“Let this tragedy not happen to another family…”

“I have lost my sleep. I try to cope. They see the killer everywhere like Caroline’s case and compare us. My husband and I and our children have been genetically tested for life and after they… The exams have been sent abroad and we are waiting for the results. (s.s. From a medical source, it became known that the specific tests are already done in laboratories in Greece.) I believe in the rare gene that caused all this because the baby was born with a rare syndrome. “I’m angry about what happened to our family, it’s a great injustice.”

She even talked about her pregnancy, which she recently terminated after the developments.

“It would be immature and dangerous if I gave birth to this child after what happened. “It’s not easy, nor is it a game.”

The father of the children: I will say it very well when it’s all over…

The father of the girls, indignant at what is being heard and written, spoke to “Tunnel” about the war that he and his wife are accepting.

“Throughout this war we have not expected anyone to tell us who we are. We know very well what parents we are, all we want is to find out the reasons behind the death of our children. To find out what happened. That is why we had filed the first lawsuit, which was filed, because we were looking to find the cause of Malena’s death. “Whatever I have to say, I will say it as soon as this case is over and I will say it very well and I live there,” he said characteristically.

In the conversation she had with Angeliki Nikolouli, the mother of the three unfortunate girls spoke about the people who have turned against her lately, accusing her but also about whether she sought help from experts.

“In the first loss I went to a psychologist at regular intervals, without medication, but there was Georgina behind, who was a huge force. I have mourned in the house a lot, but not as much as I would have liked. I still have it in me. Fortunately, I also had the help of my mother-in-law, my mom, my sister and my husband. I have not entered the girls’ room at all. When her sisters disappeared, Georgina did not comment at all, she only went to her friends and said:

“I have to go to my mom because she will cry and I do not want to.” She would come with her father and tell me “look, Dad and I. “We are strong.”

“My daughter used to tell me to take out the black ones from the same time”, he stated characteristically, while he added:

“Whatever I say to the world, they will turn against me again. I went out and they criticized me again. He did not cry, he did not… no, no, no… What I emphasize is that the opinion and respect of all people is good, but not in exaggeration. “This thing, with the attack I receive, has become an obsession.”

When asked by a journalist whether she had sought the help of an intellectual or a specialist, she replied:

What the medical examiner said in the “Tunnel”…

The medical examiner Mr. Sotiris Bouzianis, who autopsied 9-year-old Georgina, who went missing in January 2022, speaking to “Tunnel”, stressed that heart failure is the result and not the cause of death.

“The cause of her death is unknown. There is no clear picture of what may be due. Heart failure is an informal term. Next is to stop the heart from working. We can not say that the etiology of death saves and is well cardiogenic. It may be from other causes, which we do not know at the moment. Nothing was found macroscopically from the autopsy, we are waiting for the toxicological and histological examinations. The two children had different causes. One had leukemia, the other had a heart problem. It is not to go to genetics. In order for us to go to genetics, all three children had to leave us for the same reason. Probably with some predisposition. ”

Mr. Bouzianis also referred to the causes that may be due to the quadriplegia of the 9-year-old girl.

The investigations in the Department of Crimes against Life of Attica Security are in full swing. The testimonies of doctors, medical examiners who examined the three unfortunate girls have started and parents and relatives will follow.

The chronicle of deaths…

The first death occurred in April 2019. At that time, the middle girl, at the age of just 3.5, died from sudden opposition of unspecified causes, as originally attributed. Her death was later attributed to liver failure by the medical examiner who examined her. The child suffered from leukemia, but his death was not the result of malignancy. The girl’s condition, according to the doctors who treated her, had stabilized and showed that she would overcome childhood cancer.

Because of this different performance on the causes of death, the family filed a lawsuit against anyone responsible, in order to identify any medical errors and omissions that resulted in the death of the little girl. The lawsuit, however, ended up in the file.

The second blow was in 2021, with the death of their 6-month-old baby attributed to a rare pathological cause. The toxicological tests of both children were clean…

Before the family could recover from this tragic game of fate, the adventures began in April 2021 with their eldest daughter, just 8 years old at the time. He was admitted to the “Karamandaneio” Hospital of Patras with an unexplained heart attack. This was followed by the implantation of a defibrillator and a pacemaker in Onassis to ensure against any cardiac arrhythmological events. At the beginning of the summer he was admitted to the University Hospital in Rio with “encephalopathy of undetermined etiology”.

A series of visits to the hospital followed and in 2022 the 9-year-old girl was re-admitted to the University of Rio with convulsions. The medical team decided that the child should undergo further neuropathological examination and it was decided to transport him to the “Aglaia Kyriakou” Children’s Hospital. On January 29, this third childish smile faded…

The widespread deaths of children in the same family have raised reasonable questions for Justice, which has decided to investigate the circumstances of their deaths and shed light.