The journalistic world and not only, is frozen from the murderous ambush that was set during broad daylight to the journalist George Karaivaz…
Share

The “Tunnel” with live connections both from the place of the murder and from the General Police Directorate of Attica, conveyed all the latest developments for the execution of the reputable journalist.

From on top of a small motorbike, the passenger allegedly “emptied” his gun on the unfortunate husband and father of a boy.

From the scene of the murder, the police collected thirteen bullets, with several of them ending up in his body, causing him even penetrating wounds.

According to the autopsy at the scene but also according to what eyewitnesses claim, the perpetrators also gave a fatal shot to the victim’s head.

The execution was carried out, as everything shows from the investigation so far, from a pistol of nine millimeters and it is not excluded that a silencer was used, without it this being confirmed yet.

Despite the confusion that seems to exist in what the witnesses claim between them, the police conclude that the perpetrators had their facial features covered. The driver was wearing dark clothes and the passenger and executor a khaki jacket.

The show also presented a photographic document from the place where the cowardly murder in Alimos took place.

The journalist of “Tunnel”, who was found at Anninou Street in Alimos, where the unfortunate Karaivaz lived, described the escape route of the perpetrators, as it emerged from a reliable police source.

Angeliki Nikolouli appealed to residents who have security cameras or saw something strange, to contact the “Tunnel”. The information reached the show one after the other along with relevant videos of suspicious motorbikes.

The viewers themselves did a search on the internet and sent information about scooters, such as the perpetrators’ motorcycle, which have recently been stolen from Attica.

An anonymous testimony late at night spoke of the nationality of the executors.

The timeline of the attack…

At noon on Friday, April 9, as the unfortunate victim was returning to his home in Alimos from STAR TV, where he was working, he parked his car, got out of it and walked towards his house.

There, according to the testimonies so far, the two executors who were riding on the scooter-type motorbike, approached him and shot him repeatedly, causing him multiple injuries and leaving him dead on the ground.

Immediately after their heinous act, the perpetrators fled, while the neighborhood was soon cordoned off by strong police forces, men from the Crimes Against Life Department and the Directorate of Criminological Investigations. A medical examiner of the Forensic Medicine of the University of Athens also arrived at the scene.

Authorities in their attempt to locate the perpetrators and identify them, are looking for other eyewitnesses, as well as material from security cameras in the area.

The investigation so far is focused on the common criminal offense, however, all possibilities remain open. As it became known by the Police, the journalist had not stated that he was receiving threats, nor had he ever submitted a request for police custody.

It is noted that from noon to Friday night, several suspects were brought to the Security of Attica, as well as people with a small motorbike that may have matched the description. Everyone who was brought so far has been evaluated and there is no correlation of them with the case. 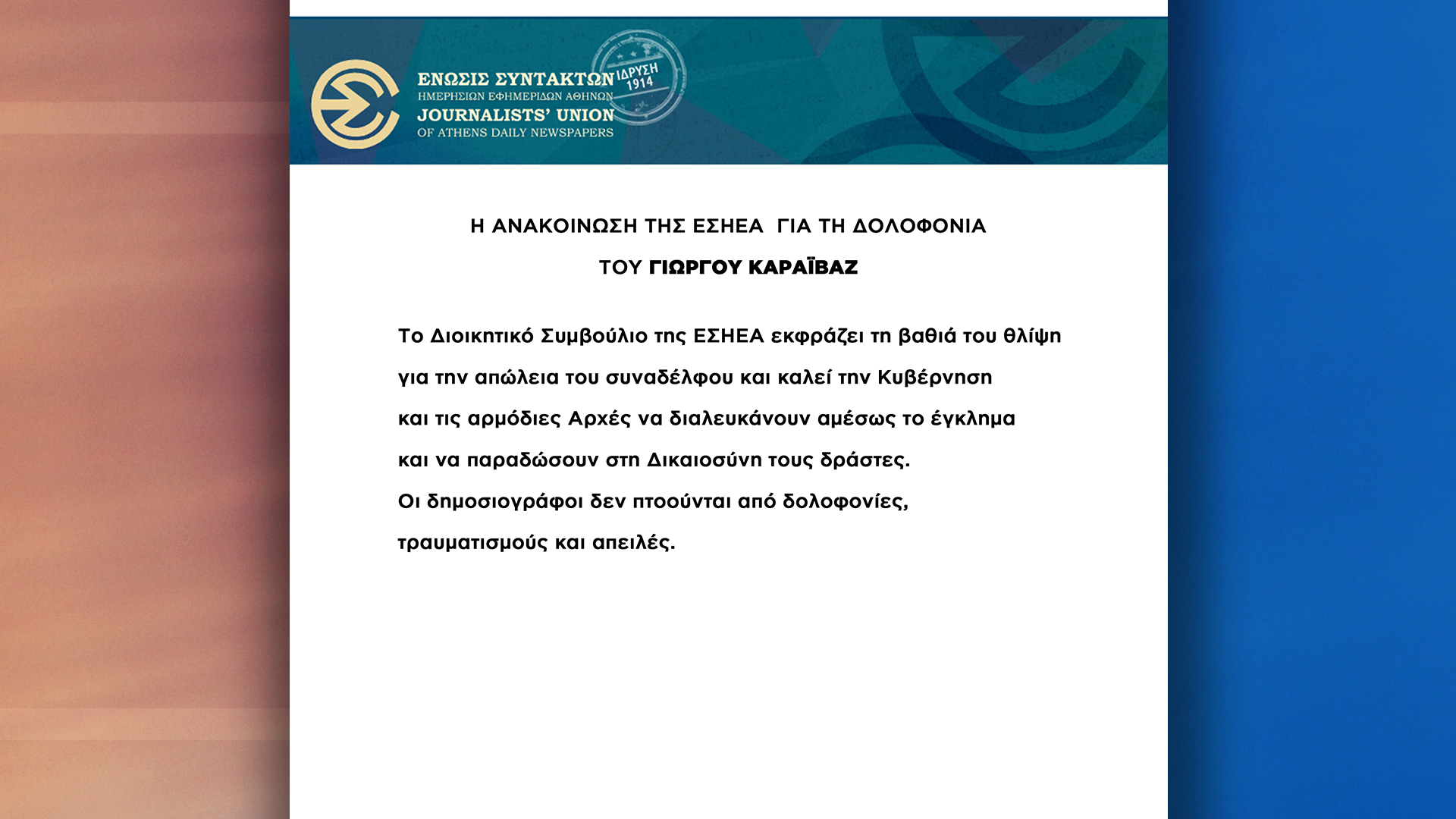 It should be reminded that the journalist Stefanos Chios, who was miraculously saved, had also been attacked.