To sensational thriller of Thessaloniki which startled the public takes a new twist!
Share

The  baton of  investigations now passed to the brothers of the businessman  Dimitris Graikos, who were silent for so long….

In “Tunnel” was found on Friday, March 24, his elder brother with whom he had daily contact.

He spoke with restrained rage and called those who know what happened “to come forward  and talk bravely ….”

Addressing to Angeliki Nikolouli said: “I was admiring you  on television and now I found myself here looking my brother …”

He described the grief that has kneel all siblings. One of the sisters, Athena who is living permanently in Germany, contacted  “Tunnel”. Weeping she said:

“Dimitris is one of the best guys, polite and good with everyone, he did not harmed anyone. They killed my brother … We must learn the truth. Nobody gives us information and we expect to see  “Tunnel” every Friday for any  news. Please help us Mrs  Nikolouli  … ”

According to Nikos Dialynas the legal representative appointed by the brothers of 59 year old Dimitris Graikos, the case would soon be transferred from the missing persons police department to the Homicide Department .

“Immediately we will submit a complaint for homicide. After many months we cannot discuss about disappearance . Graikos did not leave the country and his car has not being found yet.
About the researches he  said:

“The police clarified that they will not look at the river, so we will. Probably in ther is the man and his car. ”

The new research will focus on the riverside area of Axios and Loudias , in places that have not yet searched and include the bottom of the rivers which will be scanned with special equipment in a large radius.

Already the site has been mapped by experts.

New testimony
At the show arrived a serious testimony forthe day of the disappearance. Someone who knew  the missing reported an incident that he saw, in  which did not give special significance because he believed that Graikos left alone. Seeing the developments  contacted Angeliki Nikolouli and told her  what he saw.

“They should  testify bravely …”
The big brother of the missing businessman broke his silence and spoke for the first time on the show.
With pain painted on his face  Nikos Graikos led the reporter of “Tunnel” at the entrance of their family house. In a closet hanging work clothes of his brother, as  he used to change there. It looks as if the time has stopped. He spoke to the  journalist in the present tense.
“When it’s cold, we take the clothes  inside, warm them , he dresses and goes to work. And when he comes back, he undress, wash himself and leaves … Every day” .
He speaks to the camera with tense covering his grief and anguish.
“Six siblings are in the family. Dimitris is the youngest. I had every day my brother here…”
He said his son was very attached to his missing uncle. He is working in his unit and he  was his right hand. He did not notice a change in his behavior, but he was very upset when he was informed that due to family problems he had left his house and was staying elsewhere. But he did not know the reason.
As he said, the missing about six o’clock in the morning of the day he disappeared, had gone to his house to wake up his nephew and leave for work.
“The same day Dimitris was lost my son told me nothing. I found out the next day at noon, “he said.
Previously, the two brothers were partners on the farm, but decided to split professionally. As family they were particularly attached.
“It hurts me a lot what has happened. Those who know should  testify bravely … ” he said with anger.
“They say his phone deactivated  in the slaughterhouses, he follow the merchant with his car, he didn’t see anything? ” he said.
“I do not know what game is playing back from his extinction. The prosecutor should take the case “said Nick Graikos who wonders who had buried his car.

Brother:  I’m afraid of a crime…
“Was the whole thing set up ?”  he wondered speaking to the camera of “Tunnel” the older brother of the missing businessman of Thessaloniki.
“Not one of those who were in the slaughterhouses saw anything?

Justice. I want justice! I do not know if someone owed him money and what accounts he had. I only know that he went to the slaughterhouses and not returned … ” he said.
He said he was surprised that the cell phone of his brother switched off, because he said he was never turn it off and ruled out the idea he left alone.
“Definitely he  would contact someone, first with his daughter and then his nephew. There is no  way he  left. He had dreams, to develop his business … With the family he may had problems but recently they say that they were ok … I do not know … He lived with his daughter, ask her… ” he said anxiously.
With pain in his soul told  “Tunnel”  that he fears for the worst.
“Maybe it is a crime … For a hundred euro they could kill these days…” he said with a sigh.
He said all his siblings  suffer about the fate of Dimitris.
” We are blind … We have to wait …” concluded weeping. 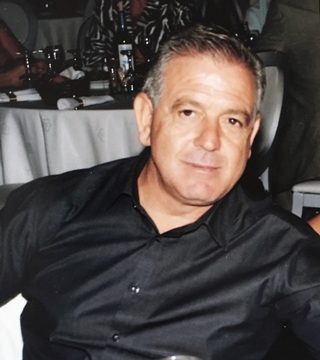 “This seemed the last position of him …”
“Tunnel” ‘s camera recorded the new investigations for the 59 year old businessman from Thessaloniki Dimitris Graikos. This time the new round of surveys asked by his siblings through their legal representative Nikos Dialynas.
The journalist of the broadcast was found along with the well-known lawyer and the Volunteer Association President of O.F.K.A.TH Christos Ramos to a factory in the Chalastra area. The security camera of the installations had recorded the last position of Dimitris Graikos before he disappeared from the face of the earth.
As explained someone in charge of the spot, this road leads to Sindos, to the industrial area of the region with the  factories and in another way which directed to Agios Athanasios. He mentioned scenarios that were heard, that the entrepreneur was fell probably in Axios River.
Thessaloniki Police who  investigating the case of the disappearance of Graikos went to  the premises several times to examine the material from the security cameras.

His siblings  opened a new research cycle …
“Tunnel” was found in the Axios River and recorded the launch of the new cycle of investigations opened by the siblings of the missing businessman. Investigations conducted by the chairman and members of the Association of Volunteers of O.F.K.A.TH while closely watch the legal family spokesman Nikos Dialinas.
Volunteers focus their research in the area of the river near the point where was recorded the last position of Dimitri Graikos by security cameras.
They said, so far have been looking at all accessible points and small rivers now remains to investigate Axios river and Loudias. Weather conditions do not facilitate the volunteers, as  the river is deep and water due season is still at a high level.
The aim is to give more emphasis to the cause of this mysterious disappearance, as key to the mystery is the car of the missing which still has not been found.
As told to “Tunnel” the president of the Association of Volunteers Christos  Ramos, have already mapped the area with aerial shots and they are able to see the level of risk that have rough spots, to directly initiate investigations by qualified diver in both rivers.
“This is a difficult task, but we should try and help to put an end to this story,” he said.
In the broadcast camera also spoke the experienced diver who will participate in the surveys. He said that  there are many difficulties with main the zero visibility in the river because of the mud, while the depth which is  up to six meters, is able to “bury” a car.
With the help of inflatable boats volunteers will use a net that will spread the width of the river which reaches seventy meters. This will attempt to scan the seabed although this is an extremely time consuming process, since it takes about one hour for five sweeping metres.
Nikos  Dialinas argued that as time passes the version of extinction weakened and increases other versions, one of which is the homicide. He said the missing person moved in a way completely opposite from the direction of his house having money on him and this would be one more reason to be cautious. He argued that if he had a meeting with someone, that person should already have occurred.
He said that at this time the file will be transferred  from the Missing persons department  of the police to the Crime investigation section.