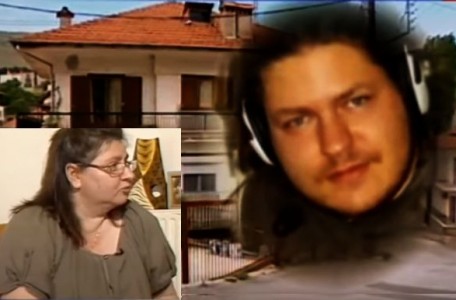 "Tunnel" on Friday night, November 18, 2016, unveiled for the first time apocalyptic footage drawn from the show's archives and showed a frame-by-frame contradictions and unreasonable reactions of the mother and stepfather of the unfortunate young man...
Share

After almost six years of persistent and methodical research,  Tunnel revealed the unseen side of this horrible crime that led to the conviction of the mother of the victim and her husband.
In the studio was found the child’s friend of Kostis, Spyros Kalaboukas, who traveled from Siatista.
He is the man who has been better off than a brother despite the accusations he has received all these years.
His words were typical: “Costis smiles, his soul breathes. So long he was buried and could not speak. Now his murderers entered the prison and his soul was justified “.

What did Tunnel cameras record

Despina Koutsegou from her first interview had caused a variety of comments with her coolness, her coldness, and her uninterrupted flow of speech. Never before at the time a mother had appeared to look for her child with such behavior.
In the footage of her first appearance at  “Tunnel”, she did not fail to ask the reporter if she needed to emphasize something extra. When she began to describe to the camera what happened to the fatal night when Costis was lost  it was like reading a well-studied text.
She claimed that Costis had gone suddenly before midnight on Friday, February 18th, to return to his house of his friend who was living opposite. He put on his jacket and shoes and took an umbrella. Before he corrected a problem in the water supply.
His younger brother, as he said, had followed him to the kitchen and because he had left the door open, he heard someone in a car in front of  the house and Kostis laughing with him.
The camera constantly recorded what was hiding behind its no-emotional description. She was angry if the script she had built was convincing. She kept in a very cool tone to say that she could not understand what was going on and Costis did not come back, while appealing to him to communicate with them and say that he was okay. It was the only moment she broke into a short rumble to find her temper within a few seconds.

It was then the turn of Costis’ father to talk to the camera. Until the crew was set up to start the shoot, Despina Koutsegou took advantage of this short period of time and began to dictate to him what to say. “Christos, you may say that the next day we were looking for him as a family …” was his words.

He never used an umbrella

When the couple was hosted in  Tunnel;s  studio for the first time on March 4, 2011, Angeliki Nikolouli, with some of the relevant questions, was trying to highlight the important details that revealed the weaknesses in the script they had made.
Why Costis turned back to take an umbrella, since the distance he had to walk to go back to Spyros’ house was too short, it was one of the questions.
Kosti’s childhood friend, who was really angry about his fate, claimed he never remembered Costis to use an umbrella to protect himself from the rain and especially to go to his house because he was just across the street.

The reporter followed the same tactic in their next appearance at the Tunnel on March 11, 2011. From the research of the show, anything that Costi’s mother claimed could not be established.
Neighborhood saw the unlucky young man return to his home. His aunt heard him coming  back, but he did not come back, nor did he see while he had the visibility, some car stopping on the street.

“Look for him in a monastery …”

Koutsegou insisted then that her son was alive and was trying to disorient the investigations. Her next scenario was that Costis might have been in a monastery.
The brother of the missing person showed “Tunnel’s reporter  in a representation of Costis’ movements that night when he was supposedly headed to the boiler room to control the problem created by the water supply. The little boy spoke without any feeling as if he had memorized the story he had dictated to tell the camera.
The last couple’s appearance on the show a few hours before Costi’s body was found, about seven months after his disappearance on September 23, 2011, was revealing. Angeliki Nikoloulis cited a witness asking to see some evidence. “We were told to re-investigate the wider region because something could have happened and there was the answer somewhere,” the journalist said. Costi’s mother and stepfather, instead of hoping something would eventually come to light about the mysterious disappearance of their child, looked inexorably without reacting.
A day later on September 24, Angeliki Nikolouli’s words were confirmed in the most tragic way. The dogs of a hunter seized the half-eaten carcass of Costis in a remote point of field, belonging to his father’s family. Significant detail: The existence of this field has never been reported to the authorities by parents, although they have been asked about it.