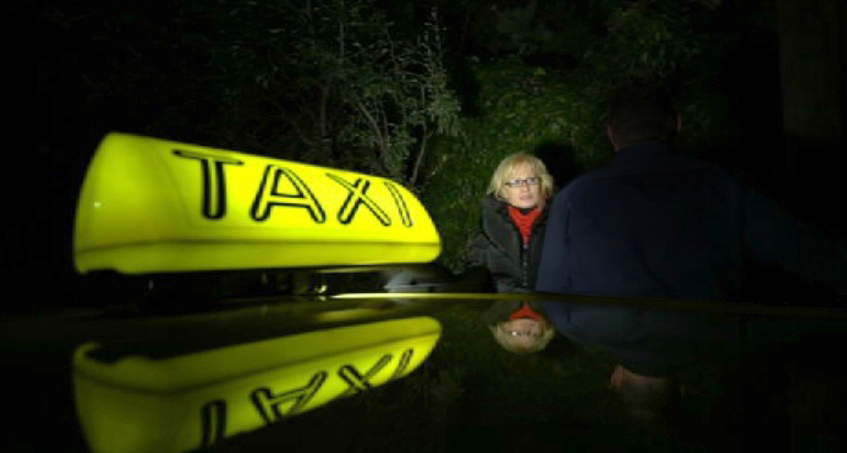 One year after the assassination attacks on taxi drivers, Angeliki Nikolouli lifted the glove that the maniac killer threw down and followed his traces …

Tunnel’s  camera recorded the reporter waiting at the same bus stop as he did. Stopred the same taxi that the killer took. Sat at the same place with him and followed the path of death … 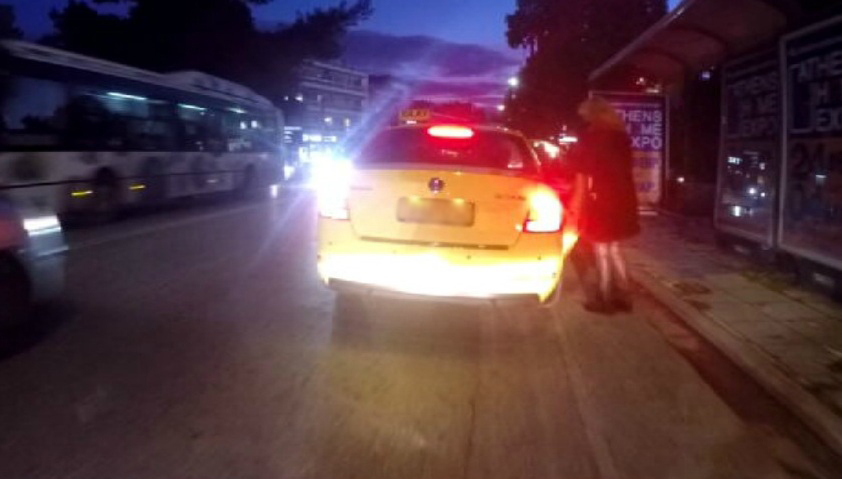 For the first time, the young driver who shot himself three times in the head, described with creepy details everything he had lived the night that marked his life.

The investigation revealed the true face of the maniac “aristocrat.”  “Tunnel” sketched out and presented his profile for the first time, according to the image retained by his first victim. 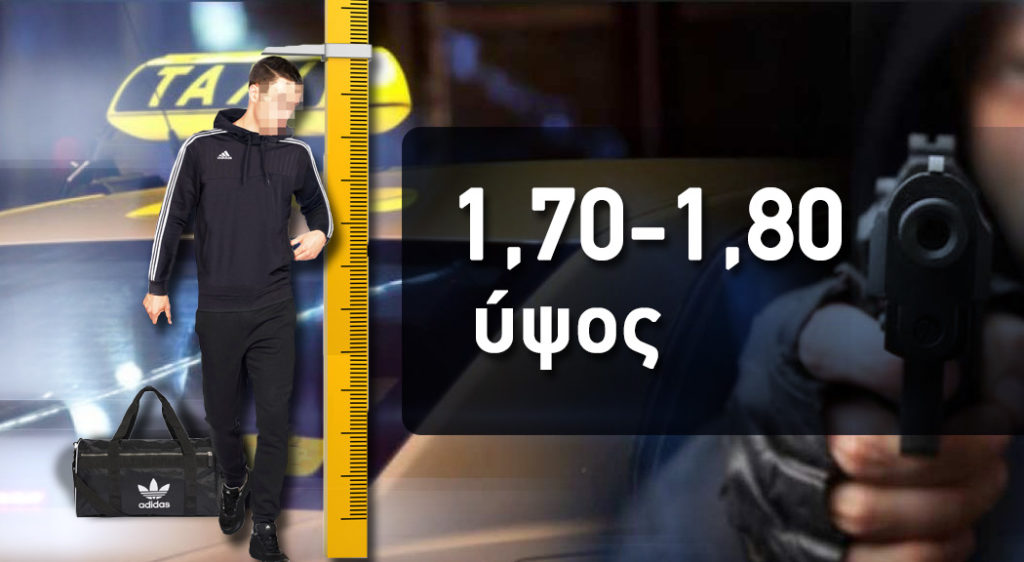 He is aged 26-30 year old, his  height is 1.70 to 1.80, he is thin with black short hair, has a white face, brown eyes and gentle features.
He wore a black sporting pants with a white adidas logo on the sweatshirt and white stripes on the sleeves and black athletic shoes. He held a black sports bag with a white logo of the same company and seemed to have emerged from Nea Erithrea’s gym.
He spoke clearly in Greek and was a resident of the Northern Suburbs. 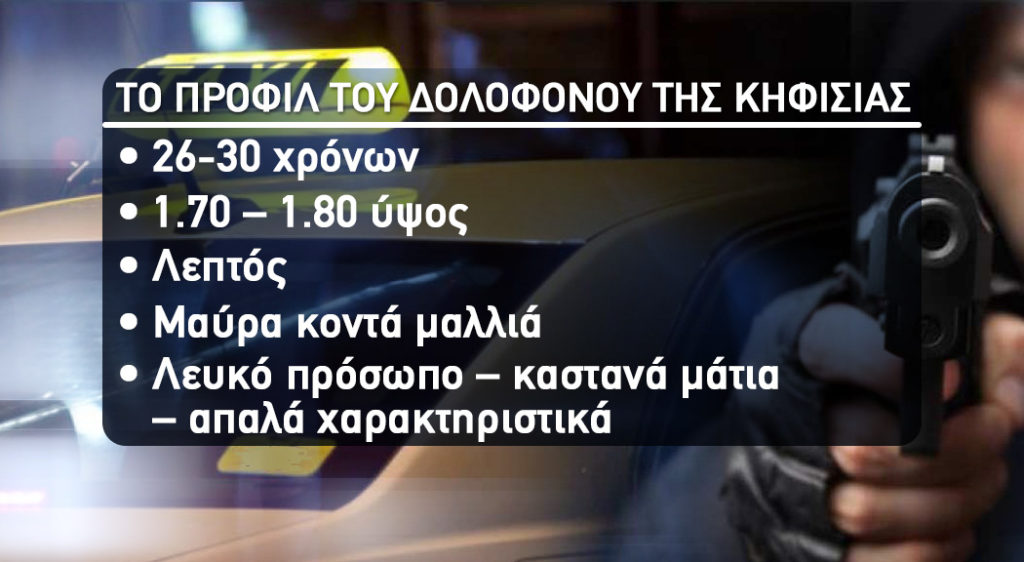 By viewing his true image, the mouths opened and the information in the “Tunnel” came one after the other. 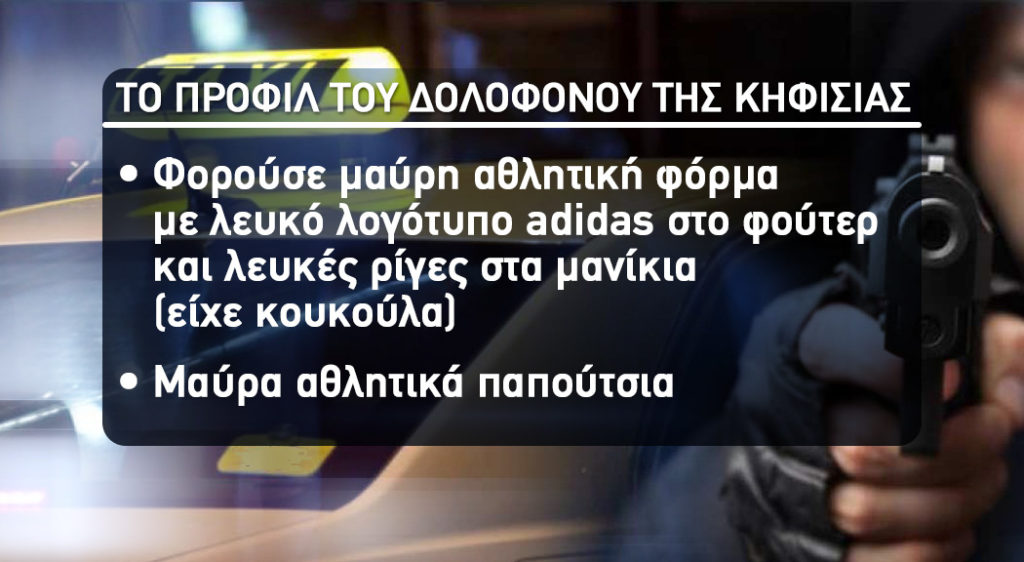 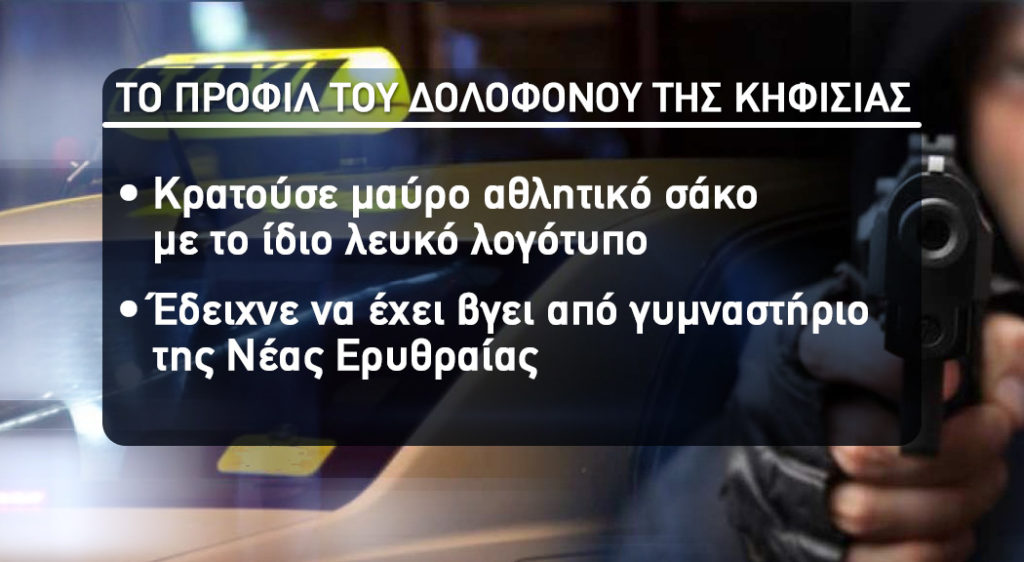 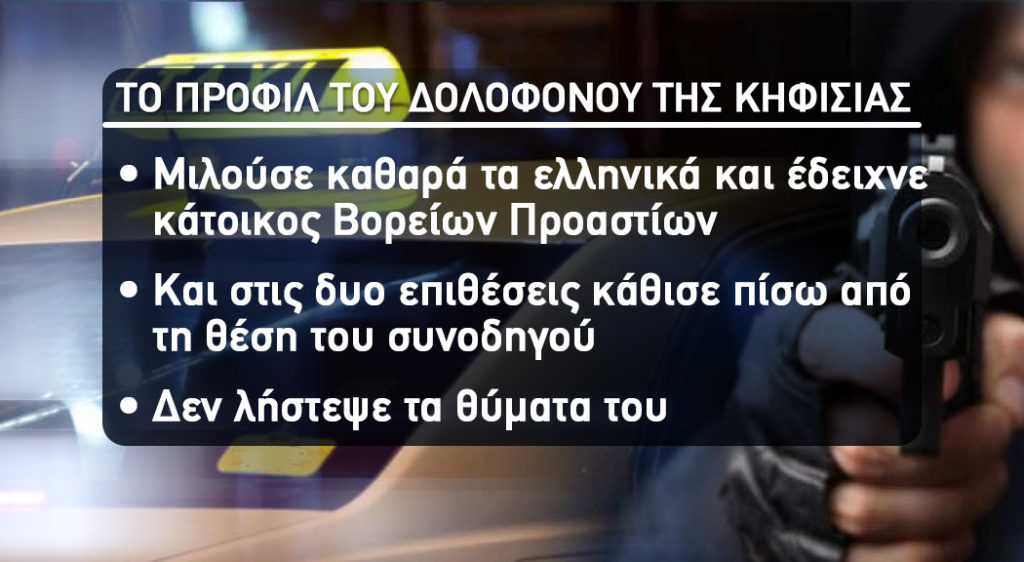 The forensic analyst, Yorgos Raftogiannis, who was found in the studio of the show, said:
“We know that the perpetrator used the same weapon in both cases. At first it spoke of a 22, but used a 32 or a 25. Because of the specific traumatic effects, it appears to have used a modified gas strike that had no factory streaks and did not give the expected energy. ”
According to the expert, the offender did not use a silencer. 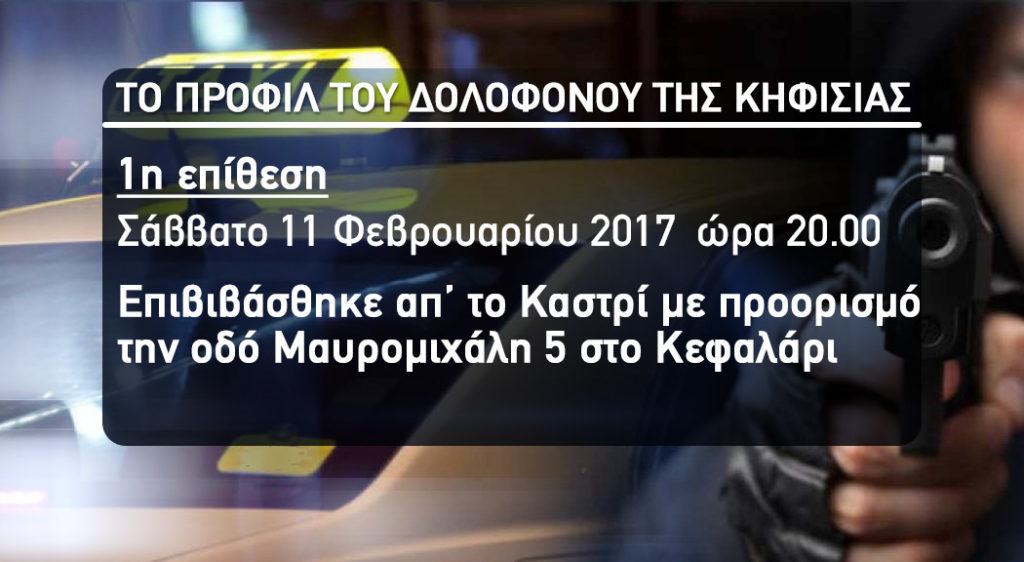 “He showed me his face before he shot me …”

The reporter made a stopping signal at the point where he received his assassin at Kastri on  Saturday night of February 11, 2017. That night he drove some clients to the Kastri hotel. A  little further on his way to the right of the street at the bus stop, saw a young man picking up his hand to stop.
He came  in the car and said good evening to the driver.

Before the killer stopped him and  boarded in his taxi, he came out of a small street beside the park, which ended up on the main road.
“He did not seem to be inconvenienced, on the contrary. He entered the taxi without wearing the hood, he said good evening  and asked me to take him to number  5  Mavromichalis street. Left his bag beside him and ask me if I know this street. I saw on GPS that it was very close. He gave me some instructions and I realized he must have been from the area because he knew it well, “the driver said.
In a related question of the reporter replied that he was sweaty and thought he might have come out of the gym in the area. 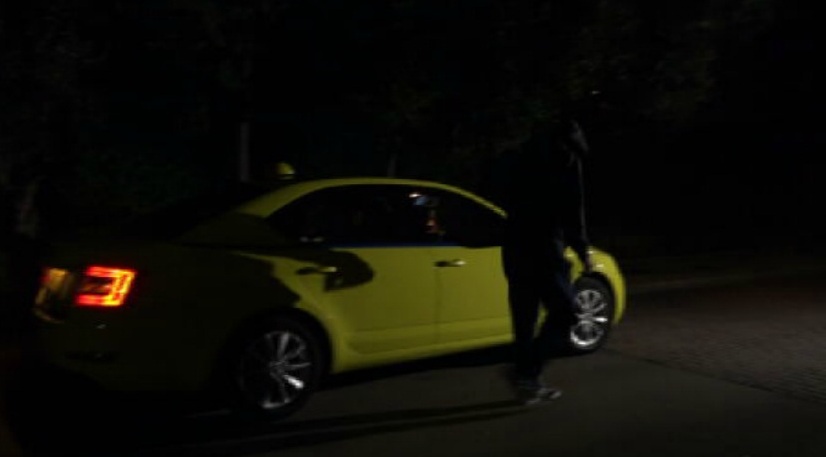 The testimony of the driver for the attack he received freezes the blood.

His murderer spoke again to him when they passed Kefalari Square, telling him that in the next street he would have to turn left.
As long as the interview went on and the memories were rejuvenating, strong  emotions  was diffused…
What he described to Angeliki Nikolouli from the moment he turned to Mavromichalis Street, is breathtaking.
“By the time we crossed the junction and while we were in motion, he threw he shoot me  on my head on the right side. He did not move at all. In my ears there was a strange metallic noise. Like someone knocking a pot with an object.
Then I fainted for seconds. I could not move my arms and legs. The car was sliding to the right. I managed to tell him : “Something is going on … Take the handbrake.” He came towards  me and pulled it. He sat down again and shot me two  more times  in the head … ”
The car’s lights were still on, but the keys were missing from the starter. The maniac pulled them out before he was lost in the dark, but he did not take  anything else.
All happened between 25 minutes. The victim, having not yet understood what had happened, noticed that he had blood, but thought  his nose was bleeding. He got out of the taxi to get his jacket off the trunk and felt sick as if he was drunk.

“I did not understand that three bullets had been wedged in my head. I was looking for the passenger because he told me he was living across the street … I rang the door bell but no one responded. I went down to another house. There they told me from the window that they did not see the person I was looking for. They did not even come to the door … “, he said.
A foreign lady who was jogging asked him if he was well and the victim replied that his nose was bleeding. She went immediately and brought him some water. In the meantime, he tried to call the Police that prompted his call to the Traffic Police. No one responded and continued the effort by calling for an ambulance. Neither did they respond immediately and decided to ask for help from his parents.
“All this time no one came there except for the woman who brought me the water. She waited patiently with me until my relatives came and brought the second pair of keys, “he said.

The key that allegedly took off from the starter the actor when he left was black with the SKODA mark embossed on top of a key ring.

“I survived by the murderer – I would die in the hospitals …”

“When we got to the hospital and the doctors took over  me, they said I was hit. In my dizziness and while they were catching my wounds, I was listening to them trying to figure out if the hit was made of iron, or something else. In the meantime, Kifissia Security Police officers came and one of them said it was not just blows, but bullet wounds. Then they decided to take x-rays … “, he said.
X-rays showed that the incident had to be taken directly by a neurosurgeon and that the patient had to be transported elsewhere. However,  ambulance was not available! With the intervention of the police, the injured driver was finally taken to another hospital, where the bureaucracy delayed the surgery since there was no surgery available!
The following exams clearly showed the missiles that had been wedged on his head and then another Calgary began.
“After all this trouble, all I remember was that I opened my eyes sometime, apparently once again failing from the blood I had lost, and a nurse told me that I went to the other world and I came back!” He said excitedly to the reporter.
The family began to look for the place where the patient and the doctor would take over. The victim himself signed to accept leaving the public hospital and eventually ended up in a private clinic having already lost a lot of blood.
The following surgery lasted eight hours and he was literally saved by a miracle. The movement of one of the three bullets two milligrams on the left of the central aorta kept him alive.
At first, everyone felt that the incident was due to a driver’s personal difference with someone. As a result, the incident was not widely known, and the killer struck again after seventeen days. His second victim died instantly.
When the rescued taxi driver left the hospital went several times to the Police to see photos of suspects. He told the reporter that the only reason he agreed to talk to her was to get the perpetrator arrested.
“he has to be found so we do not have other victims. We mustn’t forget the second victim’s family. They lost their protector, “he said. 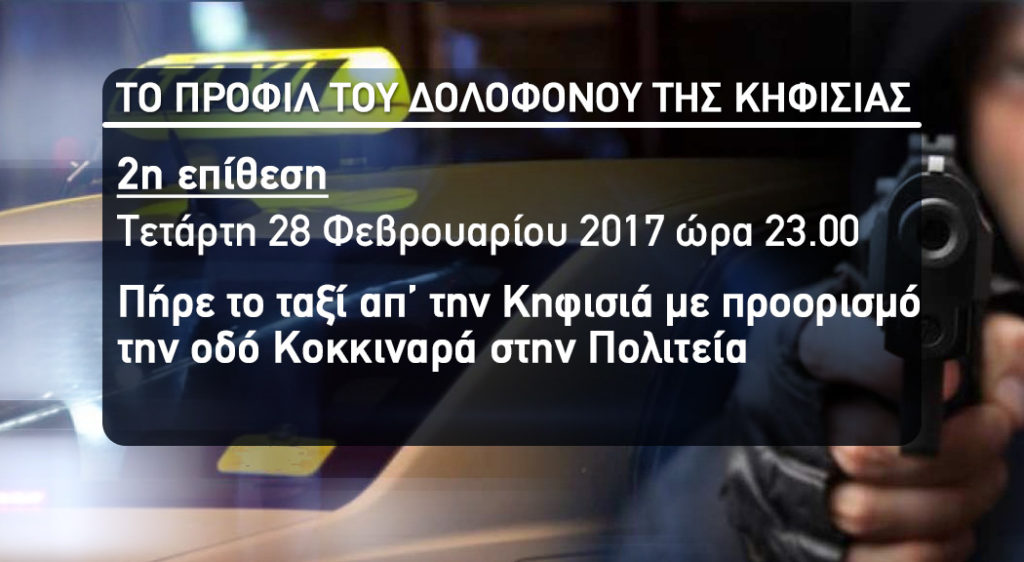 Angeliki Nikolouli was also found where the second driver, Giorgos Dekavalas, was murdered.
His nephew Spyros Kontos spoke to the reporter. The shock to him was great, as he was the last person talk to him on the phone before losing his life in this unfair way.
He arrived directly in the place with the victim’s son. 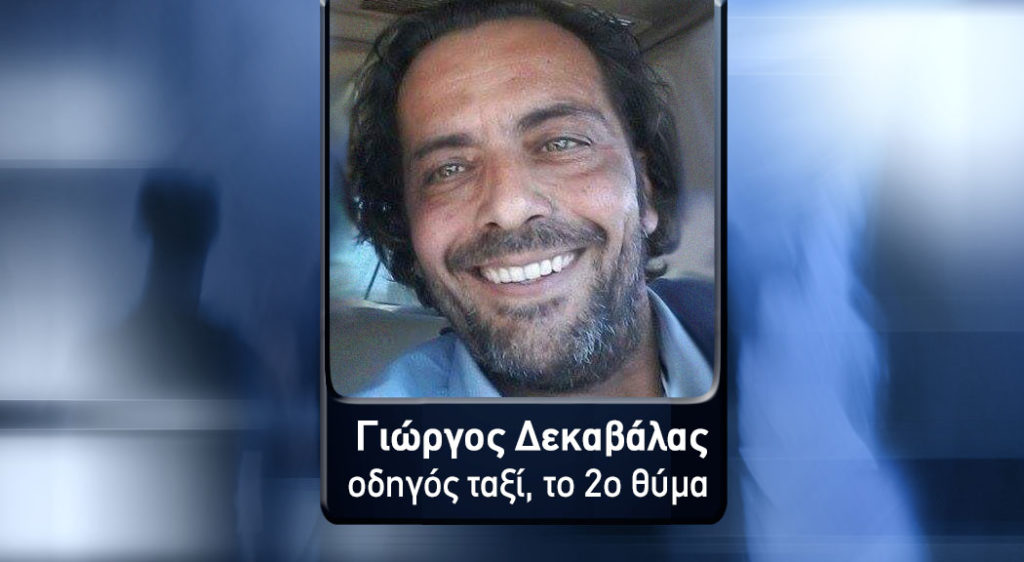 His uncle had taken his killer as a passenger and on Kokkinara Street while he was on the move, he shot him deadly with two bullets on his head. He automatically lost control of the car and fell on a stationary vehicle. The line bus could not pass and the  driver who went down to see what had happened, he saw the macabre sight.
“It’s tragic when I think that a few minutes before we were talking on the cell phone. I asked him to help me because I had a mechanical problem with my car and promised me that when he was done he would look at it, “he told the reporter.
“I will never forget the picture I saw when I arrived here. I know there is not a why, or an explanation of what happened. If he was not my uncle he would be another fellow man. It happened to fall into the hands of the maniac killer and only he knows why he did it, “he said excitedly.
He believes the killer did not achieve his goal with his first attempt, but he did it with the second. 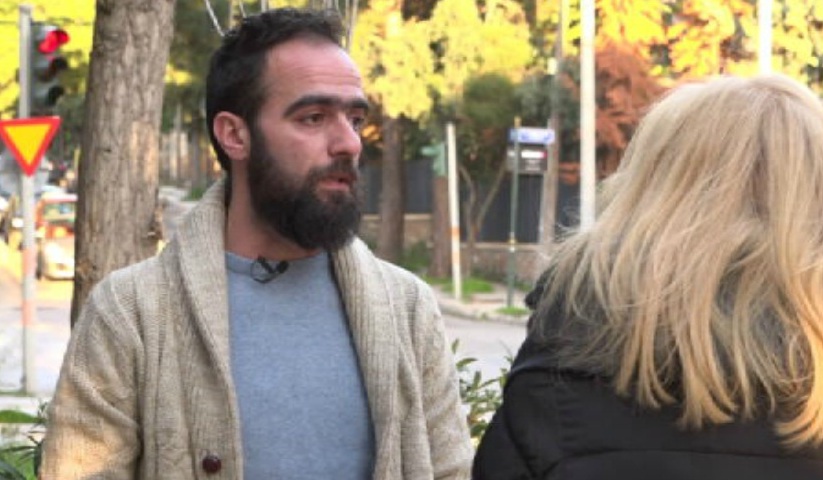 “My opinion is that he will not strike again. Obviously he would have preceded a taxi driver and saw his anger to someone else who accidentally found in front of him. Police said there was no robbery. If the first incident had been made public with the other driver, I think they would all be more careful, “he said.
He described his uncle as a good family man. He was happy that his son had finished his studies and would begin his life.
“We want the vindication. We want to hear one day that they caught the actor. To be punished, so my uncle could rest in peace and all the family to calm “.
Angeliki Nikolouli asked him if he wanted to meet the first driver who was saved from the murderous assault. He responded positively and shortly afterwards contacted them.

Mother: Find the killer before I close my eyes …
A huge “why” tortures the mother of the taxi driver who has been the victim of the maniac killer.
A year after the shameful murder and while the perpetrator is not arrested, George’s Dekavala  elder mother breaks out:
“Find the man who took away his life, to find out why he did it …”
As she said to “Tunnel”, every day she stands in front of the photo of her son and speaks to him as if he is close to her. The old woman wants before closing  her eyes for ever her child’s killer get arrested.
“George did his job. He was driving the taxi and took his killer as the passenger. We all saw what he did… I’m an old  woman, I’ve lost my husband ten years ago. Only George was there for me. I do not want a revenge. I just want to know why … “she ended up crying.

See frame by frame the deep research of “Tunnel around the case here.