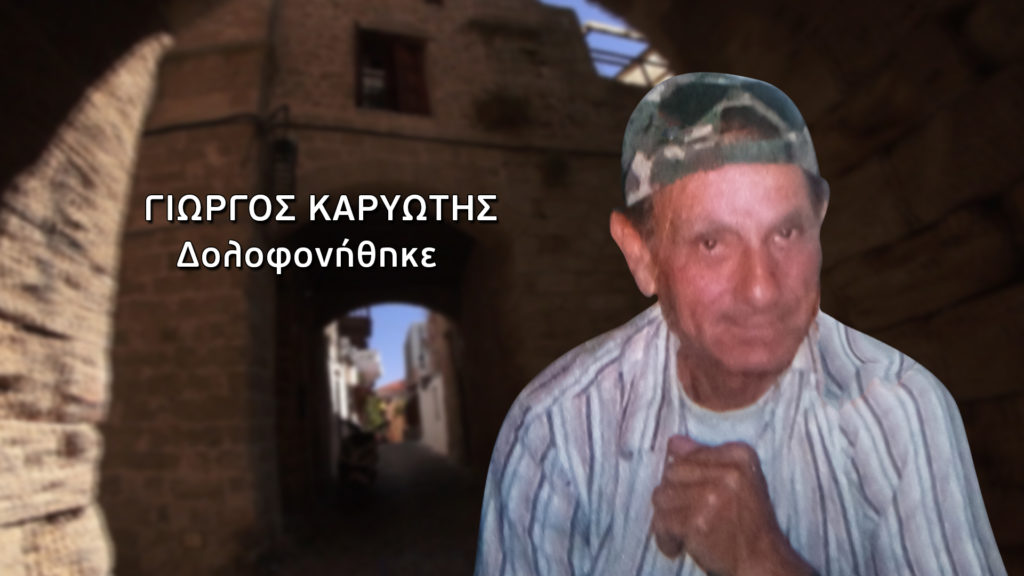 The brutal crime with the victim of a family man in the narrow cobbled streets of the Old Town in the castle of the Knights, has shocked the society of Rhodes.
Share

The mere thought that the murderer is still roaming among them, sows terror in the peaceful inhabitants of the Medieval quarter.

An unseen witness saw the strange visitor in the middle of the night at the house where George Karyotis, 75 years old, was found strangled.

The “Tunnel” brought to light what took place behind closed doors and unknown aspects of the brutal crime.

The peaceful retired dock worker and father of four children, who in the past had a cafe in the island’s port, was found murdered in his home at noon on Tuesday, June 14.

His body was found by his youngest son, Vangelis. He was found with his hands shackled with cords from his ankles. His death was due to strangulation, after having a noose around his neck with a thick rope. Just before, they had closed his airways with a towel, so that he wouldn’t scream and be heard.

The coroner places the time of death up to 24 hours earlier. This means that he may have been murdered in the afternoon or evening and not necessarily during the night, while the victim allegedly opened the door to his own killer.

The possibility of robbery seems to have been ruled out, as his money was found in a bag inside his house.

Police are reviewing footage from a large number of security cameras in the area.

From the Directorate of Criminal Investigations, some initial responses have already gone to the Rhodes Police. Several of the genetic materials that have been located in the victim’s home and analyzed are “orphans”, while some others that have been identified belong to people in the family environment who are justified in being there.

“I sent the message…”

His youngest son, Vangelis, was found in the broadcast studio, who experienced the shock of his discovery. He believes that his father was murdered around 3-4 in the morning, when a witness saw an unknown man coming out of the yard of his house. He even revealed that he was the sender of a message to the witness, asking him to meet to tell him what he saw at night at the scene of the murder.

What did the invisible witness see?

The Tunnel tracked down and spoke to key witnesses in the Medieval city in an attempt to unravel the tangled web of this heinous crime.

“I live relatively close to the victim. I was away that particular night, but the next day, after learning the scene in the neighborhood, a friend of mine described to me the man he saw at three in the morning at the scene. He had a short haircut and left through the open door of the yard, holding a bag,” the witness said. When asked if there are cameras in the venue, he replied:

“Unfortunately, there are no cameras at this point, but elsewhere. At the Old Town Gates, cameras record who enters and who leaves. I believe they will have recorded something…”

The show’s investigative team tracked down and spoke to the key witness who may have seen the killer of the deceased pensioner.

“It was around three or four after dawn. I don’t remember if this man was going in or out at that time. He was wearing work clothes and carrying a nylon supermarket bag. He was around 1.70 and had very short hair. It didn’t come from the mini market but vertically, from the sides,” he said.

What causes a sensation, however, is a message he received on his cell phone, shortly after the statement he gave to the authorities.

“I received a message from an unknown number. This man wanted us to meet up close and talk about what I saw, without anyone knowing. I did not give any further basis, nor did I answer. He didn’t tell me his name. I received the message about three days after I gave a statement to the police,” concluded the witness.

The son: Why should I kill my father?

The youngest son of the family, who found his father tied up and murdered in his own home, spoke in shock of the crime scene.

“My psychology is very bad. I last saw him the day before the murder for fifteen minutes. He didn’t tell me, nor did I see anything strange that impressed me. He wasn’t used to leaving the front door wide open and that surprised me. I went in, called him and got no answer. Then I realized something has happened. I also saw the door of the house open. The one who came in to hurt my father kicked her and the freezer moved,” he said emotionally.

He described the horrific images he saw from the spot.

“They had thrown him on the floor with his hands tied behind his back and a blanket over him. He had a black line on his butt and several bruises on his face. He was beaten… He had a rope passed three times around his neck. I throw the blanket over him and start yelling for help.”

The authorities called him to give a statement and as he believes, they targeted him unfairly.

“They took me to the Department to testify. It was a… simple chat, which lasted sixteen hours. I have explained everything to them, why should I sit down and kill my father? I haven’t done it! We didn’t have any difference, not about property, not about anything. I told them who I suspected and they gave me no basis for what I said. All they were trying to do was to “wrap” me in a sticky paper and send me to prison, without me having done anything. We hope that the culprit will be found and pay, to clear our name, which we were accused of”, he concluded.

“His son was being beaten when he found him tied up…”

From the picturesque neighborhood where the murder took place, neighbors spoke to the broadcast camera.

“If it was night when we heard that everything was closed. Whoever he was, he wasn’t alone,” said a neighbor, while a man who lives next door said:

“I was at home that night. I didn’t hear anything and that surprised me too.”

The friend of the victim and his neighbor for years, faced the horrific sight when he entered the house.

“His child, Vangelis who found him, was being beaten… He calls me, I go inside and see his father tied to the floor, covered. The man didn’t mind a mosquito, he helped anyone in need, he was generally peaceful.”

He also referred to the unlocked door of the house, but also to the victim’s wallet that a friend of his found.

“The door of his house was unlocked and in my house we sleep with the doors open, we have no such fear. His wallet was found thrown far away from the house. A friend found it.”

The show’s camera followed the possible route the assailant might have taken and found himself at the spot where his card wallet was found almost five days after the murder.

The wife: My son told me “mom, they killed him”…

The wife and eldest son of the unfortunate man, who is facing health problems, spoke to “Tunnel”.

“They tortured my husband badly, it was abominable what they did to him. I was at work at that time and my son Vangelis called me and told me “daddy is being eaten”. I didn’t have the heart to face this sight, I didn’t even come home. I still don’t believe it, I’m waiting for the door to open and he’ll come to find me”, said the victim’s wife visibly moved.

“When I met him I was 16 years old and he was 27. I came from Kalymnos and we were stolen. He was very good with our children and very hardworking. The police kept asking me about my son Vangelis, because they found him dead. I’m begging anyone who knows something to call into your show so that the mystery can be solved and his little soul can be at peace.”

Not wanting to reveal his face, the son also spoke on camera.

“The one who did it was a demon, he wasn’t human, he didn’t have a soul. If I were at home, I would decapitate them without a second thought. My father and I had a love-hate relationship. The last time I saw him was a few days before he was killed. I wanted to come stay with him, but he didn’t want to. Did he deserve to be killed like a dog? Let the murderers be found and pay for what they did,” he said emotionally.

The daughter: He was tortured and killed…

The murdered pensioner’s daughter spoke to the Tunnel reporter outside his home in the Medieval town. She describes him as a loving father who never spoiled them.

“My father was tortured. They killed him in the worst way. He was the best dad, we never missed anything. That day, my mother called me and said “Katerina, dad died”. I lost the ground under my feet, I don’t even know how I got to his house with the motorbike. I saw a crowd outside and my brother crying. He wouldn’t let me in. It’s indescribable what I experienced”, she mentioned agitatedly.

“He worked for years at the port and was also involved in fishing. In his spare time, he also went to a coffee shop. One day after his murder, this place was closed. They might be afraid, I don’t know what to assume. When he ran out of money, he would get some of his acquaintances there and they would withdraw for him. He had also given them the PIN. I had him change the password so that only he knows it. Me and my husband were the only people who had a lot of confidence in us,” she added.

The owner of the cafe frequented by the unfortunate family man also spoke on camera.

“I knew the gentleman, he was a good man. There had never been a fight here in the cafe. We were all stunned by the murder. The only one I knew they didn’t get along with was ****,” he concluded.

“We’re afraid we have the killer next to us…”

The “Tunnel” journalist spoke with residents and shopkeepers of the area about the fateful night.

Several of them did not see or hear anything. But a witness, who lives a stone’s throw from the killer’s house, heard something strange that night.

“I heard some people running and I opened the window to see what was happening. I didn’t pay attention, but the next day I learned about the incident. During the discussions, some said they saw two people leaving, who threw something in the square above. For so long there has been only silence and we wonder what has happened. What we want is to know, because we are afraid that we may have the murderer among us…”, said the witness.

The victim’s daughter also referred to another event.

“The day my father was found dead, my husband and I had come here and he showed me a pair of keys on the fire hydrant. They were my father’s keys. We informed the police and they came and took them away. The perpetrator probably threw them and someone who found them thought they were dropped by a passer-by and left them there to find them,” said Mrs. Katerina to the “Tunnel” camera.

As the show’s investigation revealed, those keys did not belong to the victim.