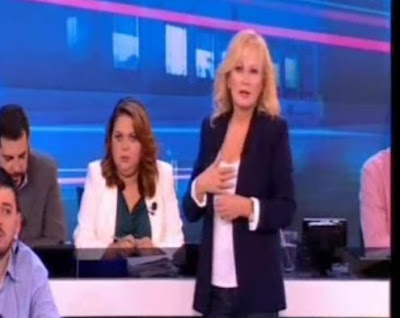 The "Life Line Hellas" undertook to support psychologically and medically the 60 year old that tried to commit suicide on Friday night, January 25th and called at the "Tunnel".
Share

The case which has shocked viewers happened shortly after midnight during the broadcast.

The man who lives alone at Colonos area was in despair and tried to hang himself under the pressure of the serious survival problems he is facing. Church gives him food and he was threatened with eviction. He was saved by a miracle when the chain he used broke.

Under shock he called at the show. Angeliki Nikolouli immediately stopped the video that was on the air at the time and asked for volunteers and friends of the show to go to the place and help the man.

The volunteers responded immediately and an employee of the Municipal Police who rushed to support the desperate man.

Police officers at Kolonos police station instead taking him to a hospital for treatment kept him because they found his debt to the public initially 250 euros, 32 years ago! When they realized their mistake and that the offense had barred allowed him to return home.

Experts from the “Life Line Hellas”, which collaborates with the “Tunnel”, are staying with him in order to support him with all the means at their disposal.