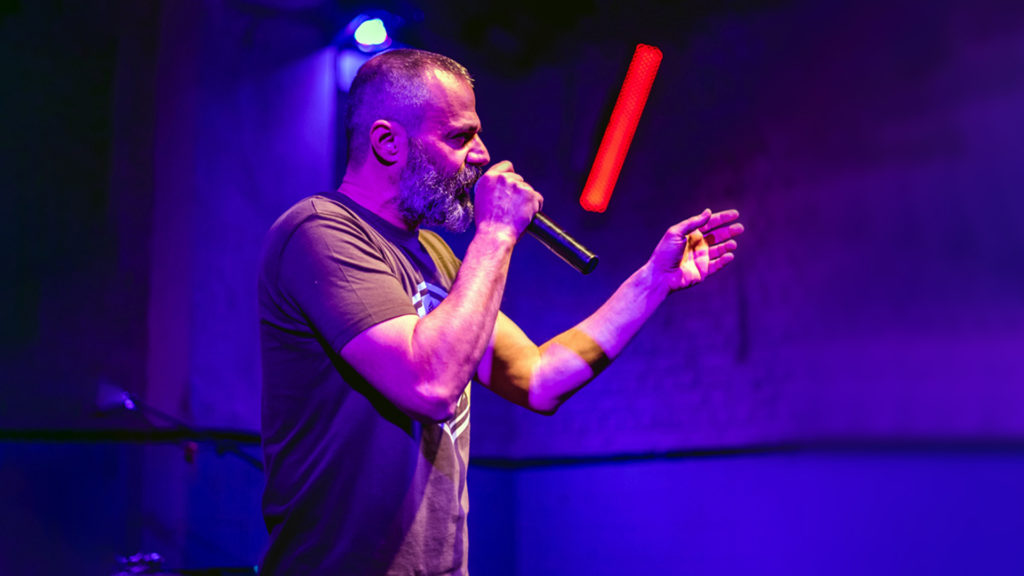 Fifteen months after that August night of death near Thebes, everything turns upside down.
Share

The case of the “traffic accident” with victim the well-known musician of the band “RAZASTARR” Andreas – Odysseus Tsiambokalos, 46 years old, takes on new dimensions, after the intervention of the public prosecutor’s office of Thebes.

The floor now belongs to the Athens Homicide, which is investigating his murder with intent.

Odysseus died around 01:00 in the early hours of Monday, August 23, 2021, at the 30th km of the Thebes-Thisvi Boeotian Provincial Road, near his village, Xironomi.

His car, a silver Mitsubishi Colt, was parked on the side of the road. He had the engine, alarms, cabin lights, and high beams on. In the back seat was his beloved dog, Argos.

At that point, he seems to have been waiting for close to an hour and a half and is investigating the possibility that he had a date, with a bad ending.

The police officers who had arrived at the scene had spoken of a hit-and-run accident, without the relevant investigation being carried out by an expert.

The family of the unfortunate musician appointed the expert Panagiotis Madias as a technical consultant, who made the place “talk” with the evidence he presented.

The wounds found on the victim’s body were not consistent with being dragged by a passing vehicle. It appears that a car, probably stopped behind his own, rear-ended him, dragged him sixteen meters across the asphalt and disappeared.

“The data came from our own research…”

All this time, his sister, Yolanda Tsiambokalou, singer of the band “Active Member”, together with his friends and associates, became detectives themselves to identify contradictions of witnesses and fill in the gaps from the incomplete investigation of the Authorities.

“The last calls on my brother’s cell phone are from some lodgings in the area, where he was looking for a possibility to stay somewhere for the night. But there are calls that have not yet been investigated to whom they belong. That is why we had requested the removal of confidentiality and also for the phones that were in the area at the time of the accident and nothing had been done. During all these months, we continuously made memos, letters up to the Supreme Court prosecutor, to the police, in every direction, where we could ask for help to see what has happened,” said Yolanda.

“In all this, his friends helped me a lot with their persistence. We moved differently, we got an expert because there had not even been an expert report on the incident, which we could not have established if the case file had not been opened. We have gathered testimonies, basically all the work in these fifteen months was done by us I think.

Showing greatness of soul, she declares her willingness to forgive any perpetrator who comes forward to speak.

“A man is missing, we are looking for the truth, what could have happened to him, whatever it is, we are trying to make scenarios ourselves. We’re going crazy and I’m sure someone knows something and is keeping it a secret for some reason.”

Expert: This is how they set up the scene of death…

The TV crew of “Tunnel” together with the expert of the family Panagiotis Madias, were at the place where the well-known musician lost his life.

From the re-enactment, it appeared that he got out of his car to talk to the driver of another car, which was probably parked behind him. Then while returning to his own, he was knocked backwards and dragged for sixteen yards.

“From both streams there is unlimited visibility. Because it was August and the road surface was dry, we would have small or large areas of brake marks. But no such traces were found. But no sign of a sideways skid from any car that might have tried to avoid him. However, we have traces of the passage of a soft mass of human volume, of mixed origin from both the victim’s clothing and the blood from this point, which lead us to a drag of up to sixteen meters on the double dividing line of the two streams in each direction”, explains Mr. Madias.

“Odysseus’ body bore bumps and abrasions on the back. He suffered burns to his leg and back. If he had been run over by a passing vehicle, as they initially said, he would have suffered much more extensive damage to his body or could have even been dismembered.”

“Vehicle – Mystery on a Death Date?”

The technical expert, speaking to the “Tunnel” journalist, explained why the body of the unfortunate Odysseus could not have passed under the vehicle that hit him backwards and dragged him for several meters and concluded:

“Did something else happen? Did anyone else stop? Was there a date? Was he waiting to pick someone up? Something has happened at this point…”

The technical advisor spoke of omissions in the investigation on the part of the Authorities.

“There was debris from a car at the scene, which was not collected and then given to an expert for examination. The investigation has not been done properly by the Police Department in charge. A special expert should have been appointed immediately, he should have gone to the place and a medical examiner should have also come to the scene”, he concluded.

“I struck a wild boar, not Odysseus…”

The show located and spoke to important witnesses who are either active in the area, or were for some reason at the scene that fateful night.

The first witness, whose vehicle had been hit from that night, told The Tunnel:

“On the same night as the fatal incident, I happened to have hit a wild boar, which was seen by the police. The road they hit Odysseus has no connection with the wild boar I hit. I didn’t need any help because it wasn’t so damaged that I couldn’t move it. Some of my friends were also present with two other vehicles, but they were not asked to testify to the authorities.”

Another witness believed to be important was upset by the show’s investigation. In full view of the TV crew, he refused to make any statement.

“Don’t ask even one, not even half a question! Hey, don’t you understand what I’m telling you?” he said, addressing the “Tunnel” reporter.

The third witness, who maintains a livestock unit in the area, emphasized:

“I didn’t see anything. The police have also asked me. I wasn’t even in the area that night when the car accident happened. They didn’t ask to check my vehicles or anything.”

“They didn’t check the witness alibi…”

Vassilis Zisimatos, lawyer of the family of the unfortunate Odysseus, speaking to the “Tunnel” camera, referred to the developments of the case.

“We submitted a memorandum with all the contradictions we found in the testimonies of the witnesses as well as with all the omissions of the AT Thebes. The lady prosecutor immediately instructed that the file be forwarded from the AT to the General Police Directorate of Attica and specifically to the Crimes Against Life Department. Now, the possibility of manslaughter is also being investigated,” he said characteristically.

Mr. Zisimatos stated that there was a mobilization after the case was aired on “Tunnel” and speaks of criminal omissions on the part of the authorities.

“After your show, witnesses were called. Those who were reported presented themselves to the AT each with their own claim, mainly that they knew absolutely nothing. Of course these claims were not investigated, so no one knocked on the door to any of the alibis they invoked to corroborate these testimonies. A car that is allegedly involved has been completely changed in the following period of time and you didn’t even ask for the obvious, even a document from a repair shop to see if these damages came from a simple collision or from a collision with a person.”

The lawyer of the family, speaking about the deceased Andreas – Odysseus, said that he was a man who had never created any dispute in his life.

“He never had any illegal activity, his whole life was his dog, his music and his friends. It is a given that we will do whatever is required and what is asked of us in order to deliver justice.”

“We managed to release the vinyl he wanted…”

One of the closest friends of Andreas – Odysseus, Christos Yiannopoulos spoke to “Tunnel” about the actions his friends have taken to learn the truth, but also about the fulfillment of a dream of his.

“We have done what is humanly possible and impossible. I speak but I also represent Andrea’s entire company and the thousands of friends who loved him very much for his work, but also as a person. We managed to get the case to the Crimes Against Life Department, the Athens Police, in whom we trust. We have not only become police officers. We have become technical advisors, experts, detectives… I could not believe that this is just a hit and run accident. Apparently the prosecutor also sent the case to Homicide and she would have seen something. We expect and hope that something positive will come out this time,” he said.

He also spoke about the difficulty of being able to realize what has happened, but also about the precious work left behind by the deceased Odysseus.

“We are impressed that after so long no one has come forward to say what happened. There is a refusal in all of us to accept this fact. Andreas has left a great musical work behind him. He will be remembered through his songs, his lyrics and the light he exuded as a person. When people like Andreas leave, the universe becomes poorer. He had dreams of leaving Athens and building a new life. He didn’t make it unfortunately. I wish we can fulfill some of his dreams. One of them was to finally see his work on vinyl after 30 years of making music. We managed it and the record came out. It was a very emotional moment and it was the least we could do for him,” concluded his friend.