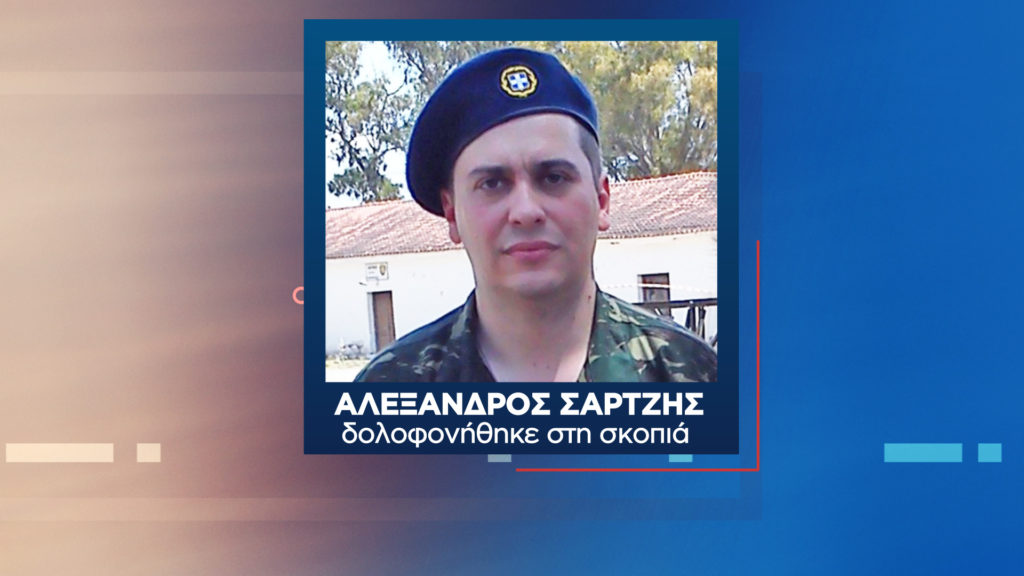 The "Tunnel" brought to light evidence of the murder of the soldier in Evros that some wanted "buried".
Share

He was found dead during broad daylight in his watch and they rushed to attribute his death to suicide.

About three years later the great development occurred. The Military Justice characterized the death of Alexandros – Athanasios Sartzis, 28 years old, as murder and prosecuted for intentional homicide against any responsible military officer of the Army.

The exhaustive research of the technical consultant and expert in ballistics Georgios Rautogiannis, appointed by the family, contributed significantly to this.

Alexandros Sartzis, a graduate mechanical engineer living in Athens, was killed during the execution of his watchtower at the “Mylonas” camp in Valtos, Orestiada. It was August 9, 2015.

It all happened within twenty-seven minutes. He caught a shift in the overlapping watchtower at the gate in a TOL shed at 13:55 and at 14:22 the gunshot was heard.

During this period, the security cameras of the camp recorded specific movements of soldiers and non-commissioned officers, which were not investigated in depth.

Apart from the cameras, there are also contradictions. In their statements, they changed their testimonies from those recorded on security cameras and in the raid book.

Another soldier reported for the moment after the shooting that he saw the 2nd non-commissioned officer at a distance of seventy meters and spoke to him. The second testimony does not mention their conversation, nor that he saw him on the spot.

A rotating camera located at a focal point of the camp takes one minute to complete a full cycle. Perhaps the perpetrator knew this, did not come out of the front exit of TOL that would be perceived by others and left from the back exit.

The family complains that despite acknowledging the murder, the required investigation was not carried out and Alexander’s case was entered in the file of unknown perpetrators. Their goal is to retrieve it and be examined by the forensic laboratories the important elements that remain “buried”.

“We were told on the phone that Alex committed suicide…”

The mother of the unfortunate Alex from his bedroom describes on the camera of “Tunnel” the shocking moment when she learns via phone that he is dead.

“Alex was an educated child with a sense of humor, full of life. He was not afraid of anything and he was claiming his rights in every way. When we learned about the incident, we were at our holiday home in Kyparissia, on the beach. A brigadier told us that our child had committed suicide. At first we did not believe him. After a while, however, he called us again and asked us about his body and if we wanted him to send it to us, as if it was a parcel… He himself came to a conclusion at that moment without even having the preliminary investigation done. A little while ago we had talked on the phone with Alex and I heard him just fine.”

George Raftogiannis, the family’s technical advisor and Forensic Analyst – Ballistic, at first thought it was a suicide, but as soon as he received the necessary documents, he “saw” the murder and consolidated it.

“The information we found differs from that of the Army,” he said.

“They confused the shot with a pot lid…”

The mother of the unfortunate Alexander referred to important incidents that took place in the camp against him.

“He told us about a non-commissioned officer who was speaking badly towards him. Unfortunately we do not remember his name; we did not pay attention, because we did not imagine that his life was in danger. My son was found dead and what happened, happened during broad daylight in a camp with just a few people.”

She wonders about the gaps of the military authorities, which until today have not allowed the truth to be revealed to justify the memory of her 28-year-old son.

“Why weren’t all those present questioned and their hands examined for signs of gunpowder? Why was the foreign DNA found on his clothes not investigated? Some important testimonies were taken a month later…”

The father of the unfortunate soldier stated characteristically:

“Witnesses fell into contradictions in their testimonies, in which they were constantly changing. Other information comes from the camp security cameras and others from the raid book and testimonies. Two soldiers who were in the nearby kitchen at that time, said that they did not hear anything and thought that the shot was the… lid of the pot!”

What the army claimed in the representation…

George Rautogiannis, the family’s technical advisor and Forensic Analyst – Ballistic, refutes on the “Tunnel” camera the “non-existent allegations” of the army, about suicide.

“To have a shot with a rifle, we have to evaluate the material from the autopsy. Neither of the two forms of self-harm reported by the military, is valid. The representation is wrong from the beginning. They show an incompatibility. The bloodstains and the part where his body was found, testify to his murder. The victim’s hand is over his gun and still holds the tip of the rope on the gun. Someone might have picked up the gun and placed his hand on it,” he said.

“Our representation highlighted the homicide…”

The family expert, speaking to a reporter of the show, said that the Military Justice accepted his own report that highlighted the homicide.

“In the representation that we made not based on estimates, but based on findings, the following emerged, among other things:

The only way to get into this position is to claim the weapon from someone and pull it from the bottom. The victim, who was holding it, also pulled it towards him. Then when the rope was detached, in an attempt to hold the gun, it came fatally to a position that was very easy to fire. The weapon was placed on the spot because it alone could not have been found there. ”

“They hid the most important element…”

The technical advisor of the family speaks about incomplete data that were handed over to the family and criminal omissions.

“In the evaluation of the case, we were asked to collect the photos. The family was given less and I do not know why this happened…

In his right hand, which seems to have fired, he had no remnants of gunpowder. It is not possible that he fired with his left hand because firstly he was right-handed and secondly it was wrapped on his hand, the gun holster”, said Mr. Rautogiannis.

“The army accepted the murder…”

“Their only attempt from the first moment was to prove that our child committed suicide. He did not have any psychopathology. If something happened I would have understood,” says his mother, Monica, an ICU doctor at Thriasio General Hospital.

“When he joined the army he went through several psychometric tests and everything seemed okay. The only purpose of our life now is to administer Justice, that is why we live and that is why we fight. We request that the Minister of Defense orders that the Forensics undertake the investigation in order to find the perpetrators. It is a shame for Justice and for the Greek Republic that such a crime goes unpunished,” the tragic mother added.

Anastasios Sartzis, the father of the unfortunate soldier, reached out to the Prime Minister and the President of the Republic in a desperate attempt to find his right.

“Although the Military Justice recognized that it was a homicide, the case was not further investigated and was filed. Nobody apologized to us. No one has been punished,” he said.

A senior officer addressing the family about their son’s death said:

“You lost a child, but you have your daughter. Tell her to make you many grandchildren… »

From the studio of the show, the parents of the 28-year-old soldier appealed to witnesses, who are now citizens to come forward if they know what has happened.