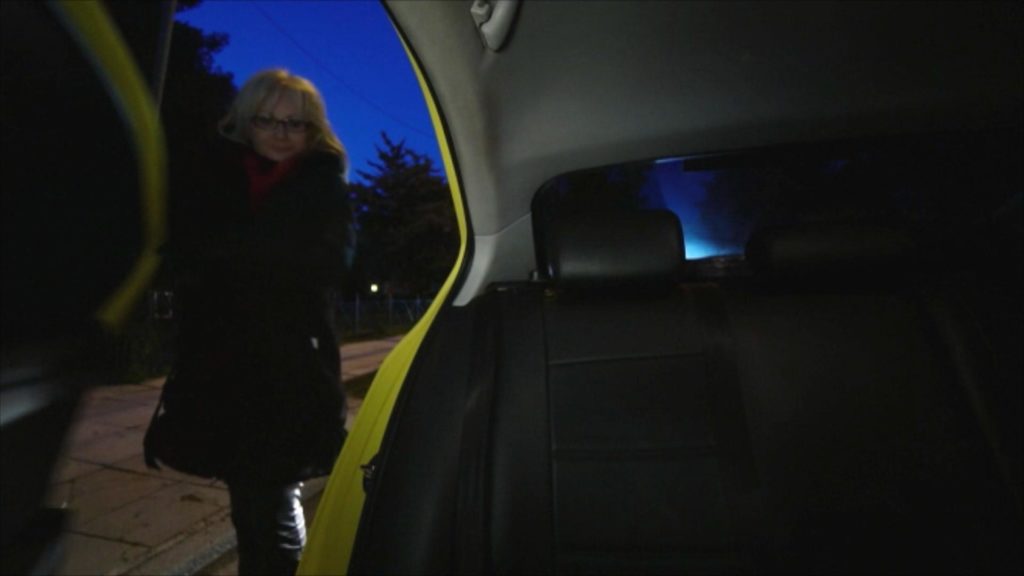 A story that shocked the whole of Greece, comes back to light through documents.
Share

The profile of the manic killer who attacked taxi drivers came to life through a graph revealed by the show, based on the testimony of his first victim, who was miraculously saved.

Angeliki Nikolouli followed the same path as the perpetrator, a course of terror led by the first victim of the attack, who survived with three bullets in the head. What he says is revealing.

The reason was given by some publications that spoke about the investigations of the Authorities and that the perpetrator was most likely fled by his family abroad.

The journalist, presenting his profile, asked the viewers who know him, to get in touch with the show. The information received by the “Tunnel” was enough, with some standing out as important.

Angeliki Nikolouli was at the bus stop in Nea Erithraia where the serial killer was standing and got into the taxi to follow the route they took to Kefalari.

“I had Saints protecting me, not just one,” says the professional driver. After what happened on Saturday, February 11, 2017 and I was saved, Saint Vlasios is my official protector. That night at about eight o’clock, I was coming from the Kastri Hotel and the perpetrator, who was about ten meters away from the stop, raised his hand at the last moment to stop me.”

“Did you notice if other taxis were ahead?” The journalist asked. “Down at the traffic light I saw other colleagues who had passed, but I do not know how long he had been at the stop. Sit back to the right where you are sitting now and be the first to say “good evening”. I replied “good evening sir, where are we going”. I did not turn to look at him, but we had eye contact through the mirror.”

According to the witness, the perpetrator spoke fluent Greek and appeared young, about 26 to 30 years old. He was 1.70 to 1.80 tall, thin, with brown eyes, normal black hair perhaps with a parting, white face and unshaven for up to two days. 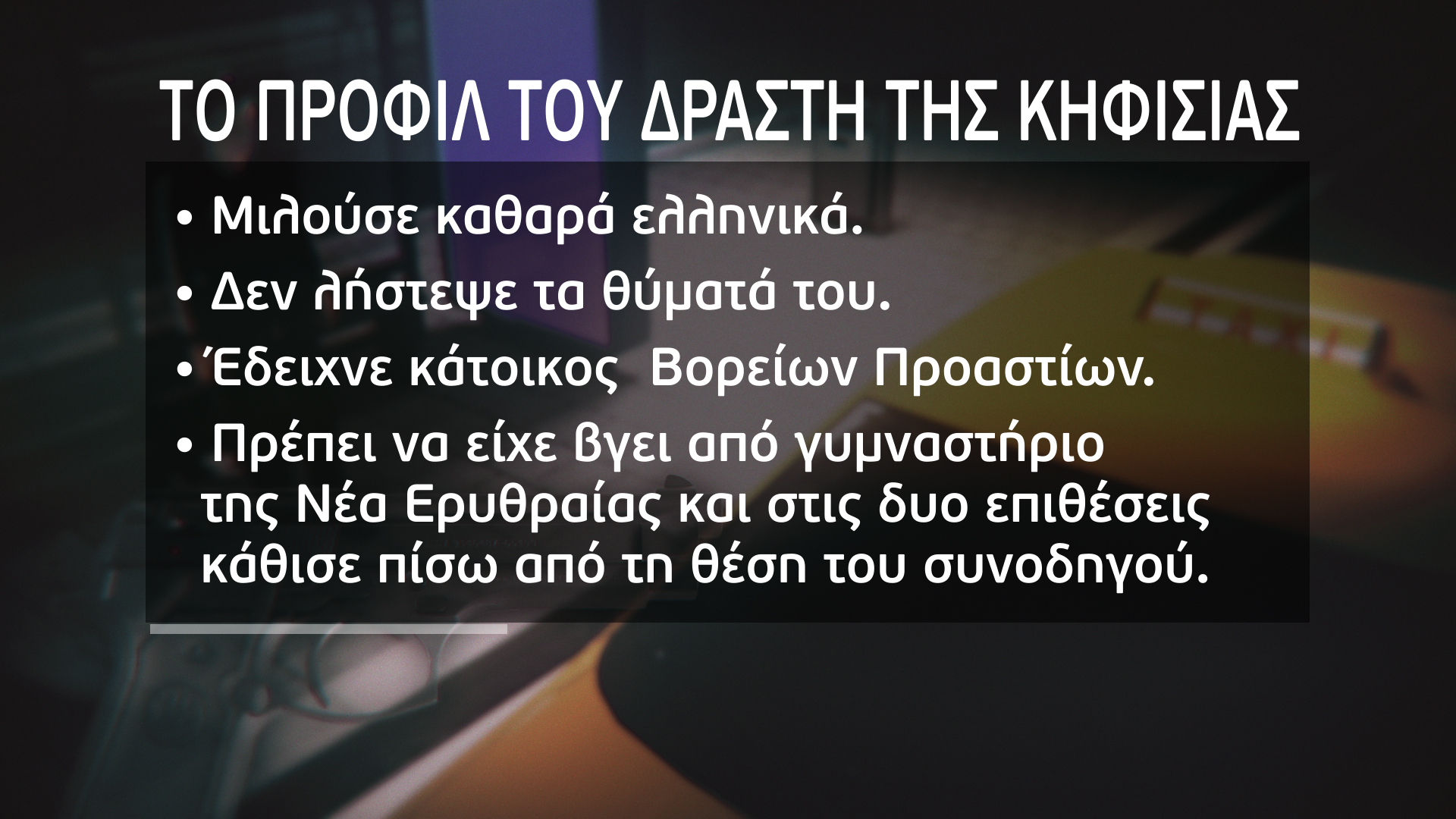 “He was wearing a black sweatshirt with the Adidas logo and white stripes on the sleeves, a tracksuit and a sports bag from the same company. He did not look distressed, just as relaxed. He asked me to take him to Mavromichali Street. He smelled like he was sweaty, because it has gyms down there and I assumed he would have left from there.”

February marks five years since the bloody attacks on the two taxi drivers.

The first attack took place at 20:00 on the evening of Saturday, February 11, 2017. The victim was the 32-year-old professional driver, who worked in his father’s taxi.

The unfortunate man received three bullets in the head and after a marathon, ended up in a private clinic where he was saved. 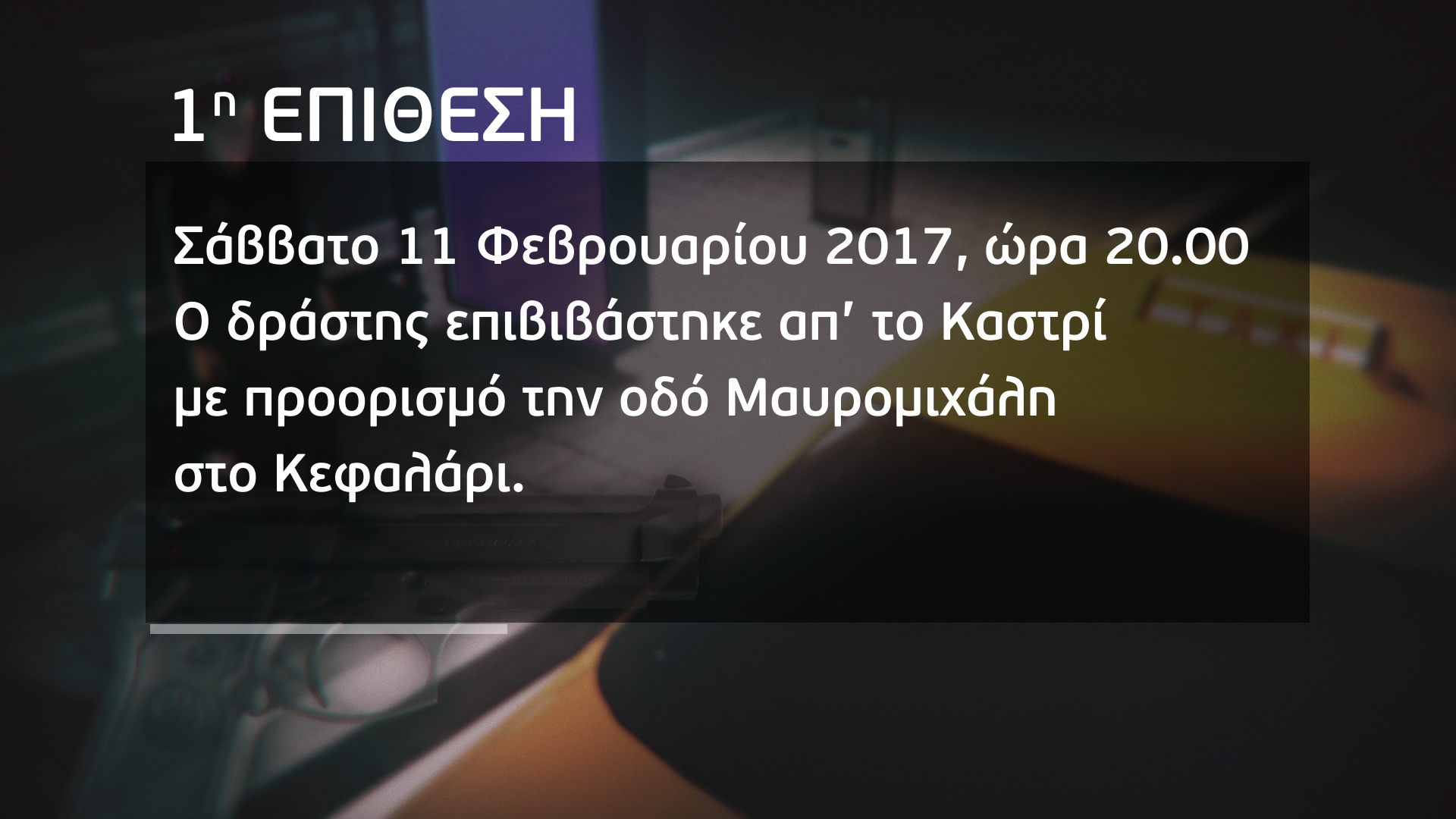 It was Tuesday, February 28, shortly after 23:00 in the evening, on Kokkinara Street, near the intersection with Charilaou Trikoupi.

The victim is a 52-year-old man, who took the perpetrator as a passenger in his taxi, most likely from Zirineio. Unfortunately this time the killer completed his “task” and the unfortunate man was found dead with two bullets to the head. 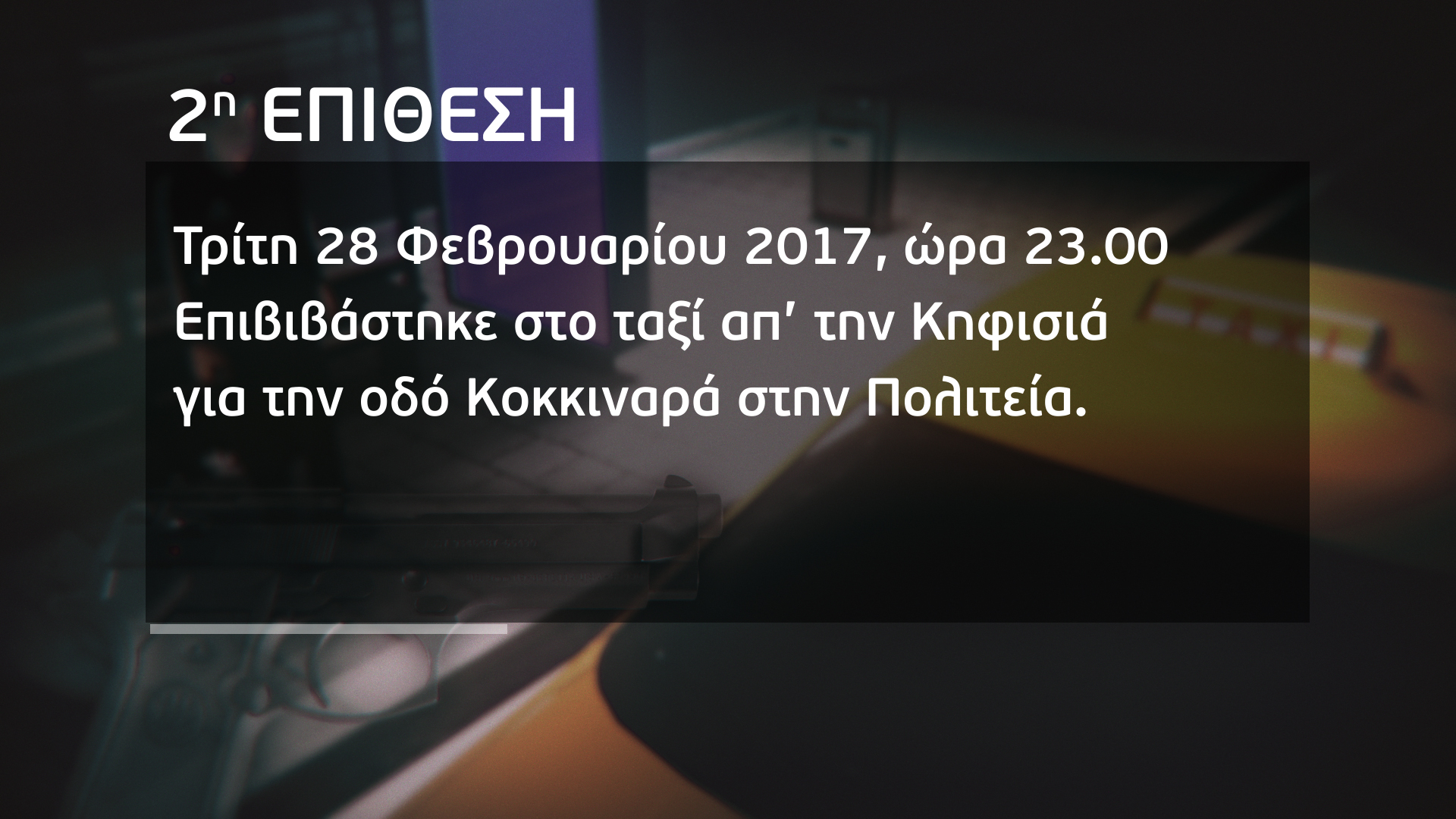 Both drivers were hit on the move by the same 22mm gun. It is very likely that a silencer was used during the attack. 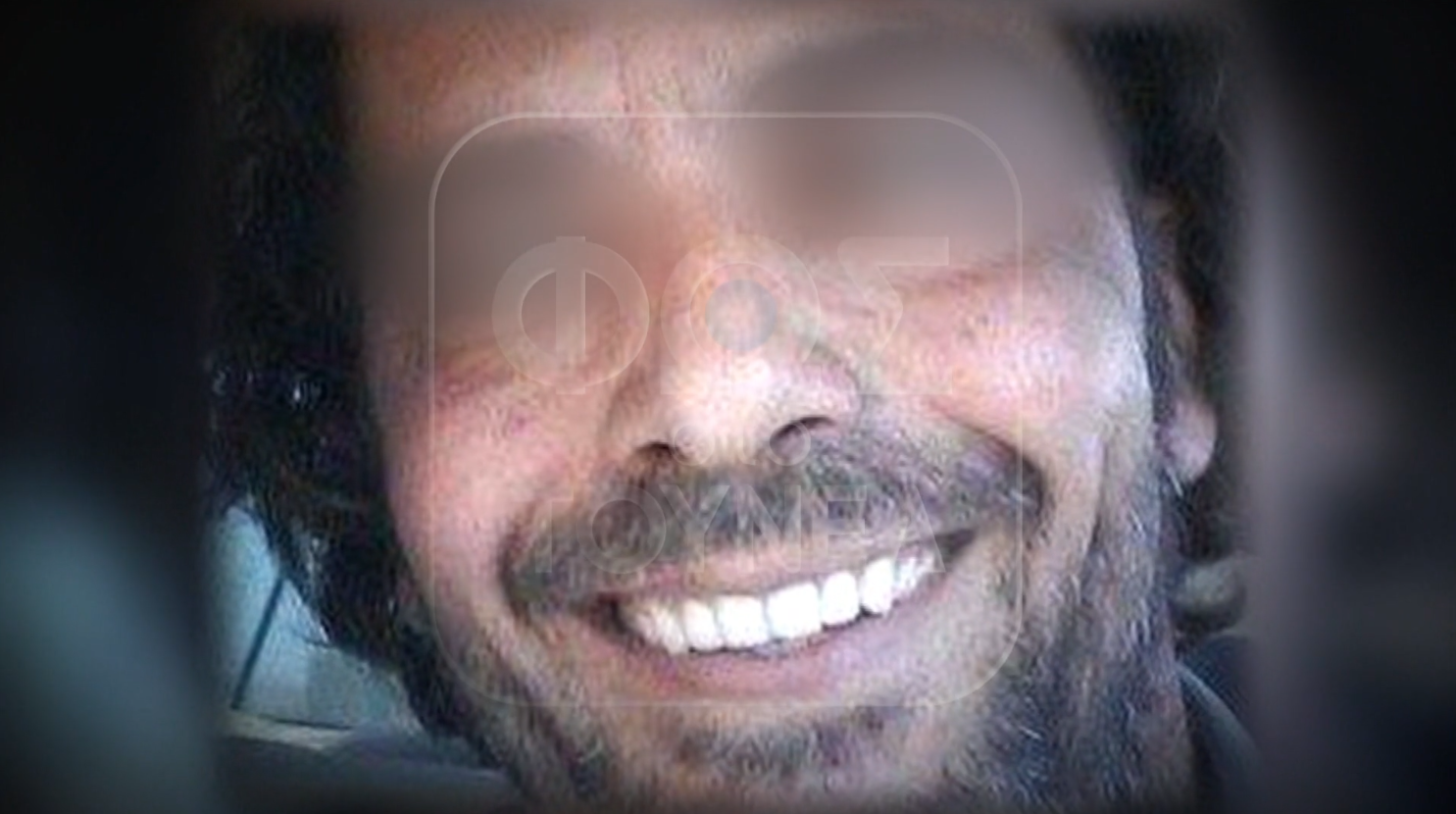 The driver, who was rescued with too much courage and composure, described in detail in the “Tunnel” the horrific moments he experienced.

“He knew the area well because he gave me instructions for the route we would follow. When we entered Mavromichali Street, as we passed the intersection with Artemis, he threw the first bullet at me. I heard a metallic sound, as if they were weighing a pot. From what I was told by the police, this is what it sounds like when there is a silencer in the gun. I fainted for a while and when I recovered, I could not move my arms or legs. The taxi was slipping for seconds. I told him to pull the parking brake and at that moment, he threw the other two bullets at me. When I woke up, my head was on the steering wheel. He had left and taken my keys.”

He also described the shocking events that followed and how he stayed on the road for almost half an hour, without realizing that he had been shot in the head.

“I went down to get the jacket I had in the trunk and I vomited. I had a very strong headache and I was tripping to a point of intoxication. I went to the house opposite, no one ever opened their door for me. I rang another bell and asked if they saw a man because he did not pay me. I did not know that I was in had been shot. I thought my nose was open. A lady who happened to pass by asked me if I was okay, went to a house and brought me some water and paper to wipe, while I was calling the police at that time. I was connected to the traffic police, but I waited and hang up the phone. Then I called 166 and there the same. I called my parents and immediately my father, with his experience, realized that something was wrong. We went to the hospital and another big adventure started from hospital to hospital, until I had surgery.”

“Fortunately, the third bullet did not cause me any damage, any disability, or death. This was my lucky shot. He went two millimeters to the left of the central aorta.”

He believes that the murder of his colleague that followed could have been avoided, if the attack against him had become known.