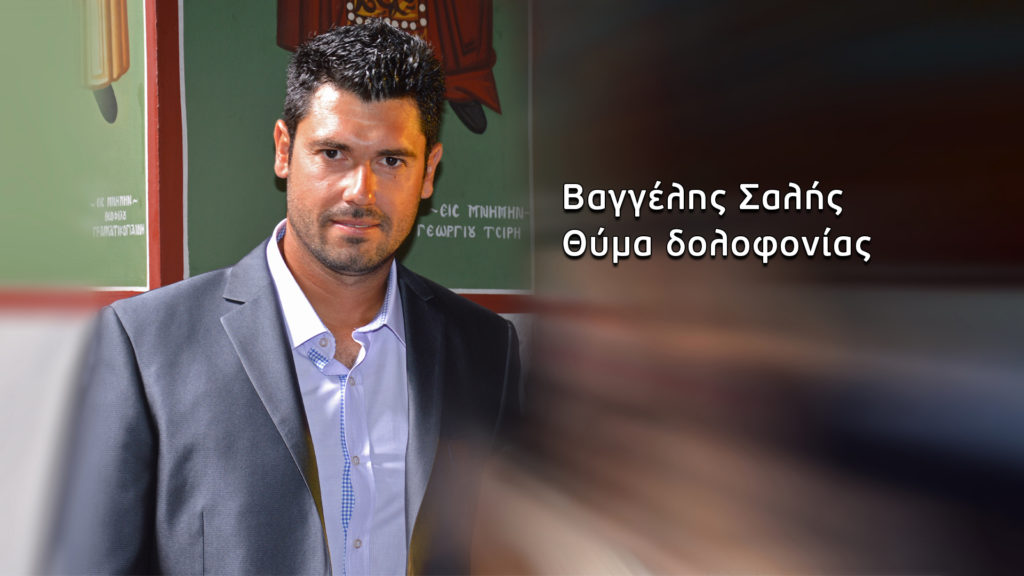 Murder is the death of the young father and farmer from Psachna.
Share

The family of Vangelis Salis, 33 years old from Evia, has been continuing their great struggle for years now to find out who deprived him of his life.

The unfortunate head of the family was found in a semi-voluntary state, inside a warehouse in his fields by one of his workers. Next to him a bottle of pesticide, different from the one that was detected in the course in his body.

It was Tuesday, May 24, 2016 when he succumbed to the hospital where he was transported. Police rushed to “baptize” his death as a suicide, without the necessary investigation at the crime scene.

What the police did not see, was identified by Justice, which spoke of murder. The case, however, enters the file with his brother and mother fighting for the truth.

The “Tunnel” was found again in the village of Kastela Psachnon, where the family maintains its fields and talked to his brother. The aim is to reopen the case with the new testimonies and the evidence they found.

“They locked him and threw the key…”

“It was noon and I was at the party with my mother. My brother was in a cafeteria to get coffee. The owner saw him well, they talked and on the way to the fields he met a friend, with whom they arranged to meet to talk. A little while later, the worker found him in the warehouse. The door was locked from the outside and the key thrown one and a half meters away. He may not have committed suicide and be locked out. When my brother saw him, he raised his hands as if asking for help. She saw him as his God. The worker picked him up, took him to his car but could not find the key. He found it a little later under the driver’s seat. “It was as if someone wanted to delay his transfer to the hospital”, said his brother Vangelis Sali.

“Those who set it up were good directors…”

The victim’s brother cited both the hot questions and the criminal omissions, which result in his killers still circulating freely.

“The pesticide found in his stomach has nothing to do with what was next to him in the warehouse. The whole scene was very well directed. The police did not come to the spot, nor did they examine important facts that could answer all our questions. “Justice has now accepted that it is a premeditated murder in a calm state of mind, but we are still looking to find out who killed him,” he stressed.

“He melted with joy for his baby…”

The mother and the cousin of the unfortunate father, spoke in the “Tunnel” about the smiling Vangelis that everyone loved.

“He was very happy that he had just become a father. He was unhappy. We talked to him about the baby and he was melting. If Vangelis was the joy of life on his own, he would fly to the sky with this baby. Optimistic person, always with a good word of mouth for everyone. He faced everything with a smile and in the difficulties he did not put it down. We had arranged at the weekend to go from his house to see the little one. “If someone wanted to hurt him, he would do it just to win something, I can not think of any other reason,” said his cousin on the show.

His mother is devastated, all she wants to know is the truth about what happened to her lad.

“He was very happy, he had taken sweets to the fields in those days and he was watching the whole world for the birth of his daughter. I lost the earth from the sky, I was cut into fifty pieces, you can not imagine what I suffered as soon as I heard the news. I was shouting and crying. Then the police came with a bottle of pesticide in their hands. I do not know from there and then what happened. I want to know who hurt my child, nothing else. He was a thirty-year-old boy. ”

“We have the prosecution for homicide…”

Angelos Peponis, lawyer of the victim’s family, spoke on the show about the developments in the case, but also about the mistakes and criminal omissions of the Authorities.

“For the first time the case was closed as a suicide, then and after the great struggle given by the family, criminal prosecution was instituted for homicide against unknown perpetrators in a calm state of mind. Many mistakes were made at the level of police authorities. No autopsy was performed at the site, no fingerprints were taken and much more. “In the correspondence of the investigator to the prosecutor, it was stated that these omissions made it difficult to find who is guilty”, he stated characteristically.

“Unfortunately, mistakes were also made at the investigative level. Not a single question was asked by the investigators to the witnesses who fell into contradictions and neither was the cross-examination of witnesses, the classic case that is followed in such cases. “There were serious things that were submitted and those who were considered suspects were not questioned further.”

He described the incident with the container with the basic evidence of the case, the pesticide, as ridiculous.

“What happened to the container is another paradox of the case. What was found next to him is not the same as what was found in his body. “The authorities did not collect it from the place”, he concluded.

“We will highlight the person who remains unknown…”

The lawyer of the family of the unfortunate young man, stressed that if the right actions are taken by the authorities, the killer will be located.

“The pesticide found in Vangelis’s body was consumed with food and this has been proven by the forensic report. According to the testimony of the worker who found him, he was foaming at the mouth and eating some food. This drug disappears very quickly from the body. If they had been late to find him, they would not have located him and today we would consider that he committed suicide with the pesticide found next to him. It is a carefully crafted criminal act and we are looking for the motive to relate it. “We believe that if some things are evaluated in combination and witnesses are testified in contrast, we will also highlight the person who remains unknown so far,” said Mr. Peponis.