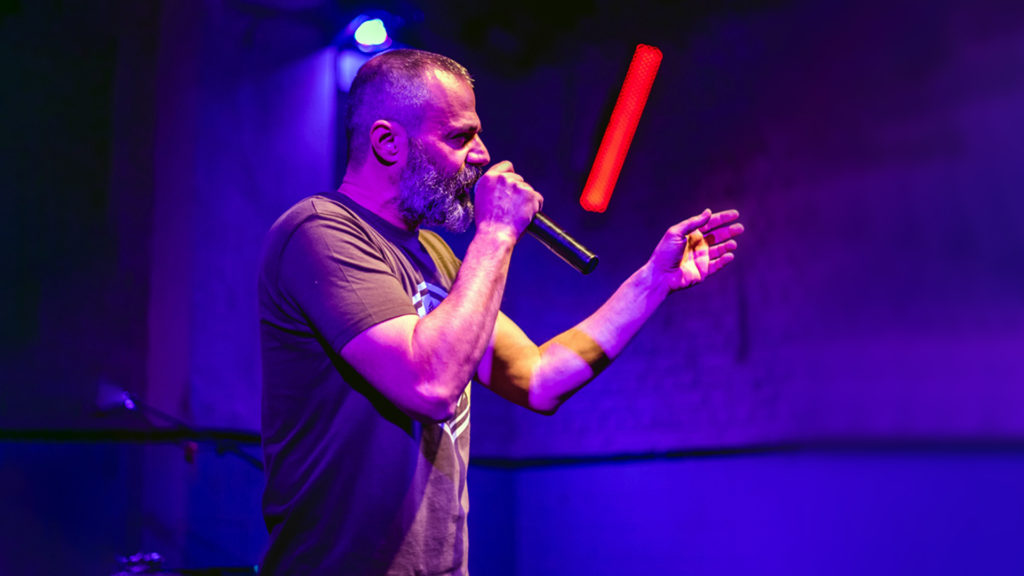 Huge wave of support from friends and fans to the family of the unfortunate rapper, who was beaten and abandoned overnight, resulting in his death helpless.
Share

The well-known musician of the band “RAZASTARR”, Andreas – Odysseas Tsiambokalos, 46 years old, was found dead in the middle of the road, near his car around one in the early hours of Monday, August 23. It was at the 30th km of the Provincial Road Thebes – Thisvi Boeotia, near the village of Xironomis.

Inside his car, a silver Mitsubishi Colt, which was not locked, in the back seat his favorite dog “Argos” was a silent witness to this crime.

Andreas seems to be heading to Saranti beach, when he parked his vehicle on the side of the road. He left the alarm lights, the cabin lights, but also the traffic lights on and went out.

A passing car dragged him close to fifteen meters, passed over him and disappeared. The unconscious driver seems to have made a U-turn to avoid neighboring cameras and got lost in the dark.

From the first moment, the family had at their disposal video footage from a security camera, which shows a small car passing a few seconds later, around one. It seems that his driver, who has not appeared until today, witnessed this brutal crime on the asphalt.

During the live broadcast, several testimonies arrived, for cars that were suspiciously moving in the area in those days. The document presented by the family’s lawyer, Costas Parigoris, signaled an alarm to car professionals, who conducted a search overnight. It was a car part, found near the victim. The number and the data engraved on it, paved the way for the tracing of its owner.

“The car passed over him…”

Michalis Mytakidis, a well-known musician of the band “Active Member”, speaking on the camera of the show about his wife’s brother and his friend, described what preceded the sad event, but also the difficult task of recognition, which he was called to undertake.

“Andreas has always been a special child. I cannot take out of my mind the image of him falling on the street before the ambulance arrived and the difficult position I was found when I was called to recognize him in the hospital. I will never forget it. That night, a few hours before the fatal accident, he had gone to a tavern to get food for his dog. He charged his cell phone and asked where he could find an open gas station. A little later, our phone rang and we were informed about the incident”, he stated characteristically, while adding:

“Andreas was right on the dividing line, in the middle of the road. There were people who said they saw the car without anyone inside and other who saw it with the dog in it.”

Wanting to sensitize and motivate anyone who knows anything, to speak, he said at an emotional state:

“The appeal of the family, if there is a little soul left in whoever did it, is to explain to us what happened. Let him do it for his soul, let him make a human move, even now.”

“Let the one who hit him and leave him appear…”

Yolanda Tsiambokalou, talking about her unfortunate brother, talks about a man with a sensitive soul, who knew how to go further in his life and not hold a grudge against anyone.

“Until the culprit is found, I cannot move my life forward unless I forgive. But to do this you need two, the one who forgives and the one who takes responsibility. What concerns us is to find out who abandoned him and why. The one who did it, definitely wanted to hide something. I do not know if he was drank or if he wanted to hide another secret and because the investigations are ongoing, it is better that he appears voluntarily,” she said in shock.

She stressed that if he had been given first aid earlier, he might had been alive now.

“The ambulance was late enough, it took at least fifty minutes to arrive.”

Yolanda also referred to her brother’s love for music.

From a very young age he was writing lyrics in English, was involved in rap and listened to hip hop, until he met Michalis, my husband from “Active Member” and they started doing things together. A band started there, which in the course set its own horizon. An album would be released a few days after the accident. Myself and his friends will make sure that this album is released”, she concluded, at an emotional state.

He was hit near his village…

Brotherly friends of the unfortunate musician, speak in the “Tunnel” from the place of the tragic event, where his vehicle was parked.

George Spiliopoulos, manager and for many years a friend of the unfortunate Odysseus – Andrea Tsiambokalou, referred to the tragic event that in an instant turned everything upside down.

“We have symbolically placed a banner so that those who pass through here know what really happened. There are witnesses who saw him in his car, but there is no evidence from the moment in question. Neither we nor the authorities rule out any possibility and this is something that the investigation will clarify.”

Christos Giannopoulos, another friend of his, is looking to find the truth to justify the memory of Andreas.

“Andreas, as a local, knew these streets bit by bit. We cannot understand what happened and why he got out of the car. I think we are living a bad prank.”

Panagiotis Katsios, another friend of the victim for almost three decades, talks about the hours they met before the tragic event.

“We were in Thebes in a cafe and then we went to my house to see my wife and child. He left around 21:30 and shortly after 22:00 he was in Ellopia for food. Then what happened happened,” he said in shock.

“It’s a murder, let those who know speak…”

Dimitra Kyriakou, one of the victim’s favorite aunts, talks about a criminal act and appeals to anyone who knows anything to come forward even now.

“I believe that the one who abandoned him has regrets and will have shared it with someone. I hope this person has better human feelings and starts talking. The act is criminal. If he had notified immediately, our beloved one could have been saved. This question is hurting family, friends and everyone.”

Speaking about the character of the musician, she reveals that he was a very sensitive man who only did good to his fellow human beings and the environment. According to her, after the catastrophic fires in North Evia, he sent the money he earned from the sale of his CDs to the victims.

His other aunt, Athena Kyriakou describes the musician as a happy man, who wanted to make a fresh start in his career in his father’s village, in Evrytania.

“It hurts us so much that the culprit of the man’s death has not yet been found. We assume he is a murderer. You do not leave him like that on the street, and you pass over him “, says Mrs. Kyriakou and describes the night when her nephew was found dead: “His dog was in the back seat with the door closed. When the police came, the dog came out, was very angry and did not let anyone approach his boss, who was lying dead on the ground.”

“A few hours before we were having a birthday party…”

“From testimonies, we have the image that the car is returning to the spot, committing the crime twice. We have not been told what kind of car it was. ”

He also described an incident that unfolded on the day of his birthday and shocked him.

“The tragic thing is that twenty-four hours ago we were all partying together. After the party, Andreas stayed up late, something he was not used to doing. It is a scene that I will never forget, when it was dawn, he sat with his sister for a long time and I let them talk in peace like siblings, as if he felt something “, concluded at an emotional state.

What does the witness who found him hit in the middle of the street say?

The witness who alerted the relatives of the unfortunate man she found in the last calls he had on his cell phone, spoke to “Tunnel” about the shocking moments she lived through.

“When I got to the spot there was already a couple there. They also made me signals to stop because there was a man in the middle of the street. I stopped, I did not understand exactly what had happened. The first thing I did was to see if the man was conscious,” she said.

The victim’s son-in-law and sister-in-law sought to find her later to thank her.

“She is the girl who was with him and held his hand. Andreas must have died in her arms. We tried a lot to find her, because no one had kept her details. We wanted to thank her for staying with him until the end,” she concluded.

The message of the friends about the rapper…

Andreas – Odysseus’s friends with their messages on social media, made known the relevant research of the show, inviting those who know, to speak.

“Even now, almost 3 months after that dark moment, we call on anyone who has information that will lead to the remaining pieces of the puzzle and the revelation of the truth, to contact the show in any way they wish, even with complete anonymity and to help so that justice is delivered. These are the few things that Andreas’s beautiful, bright soul deserves.

There are too many of us, and it’s time to show it so that everyone understands. We will NOT calm down, we will NOT stop.”