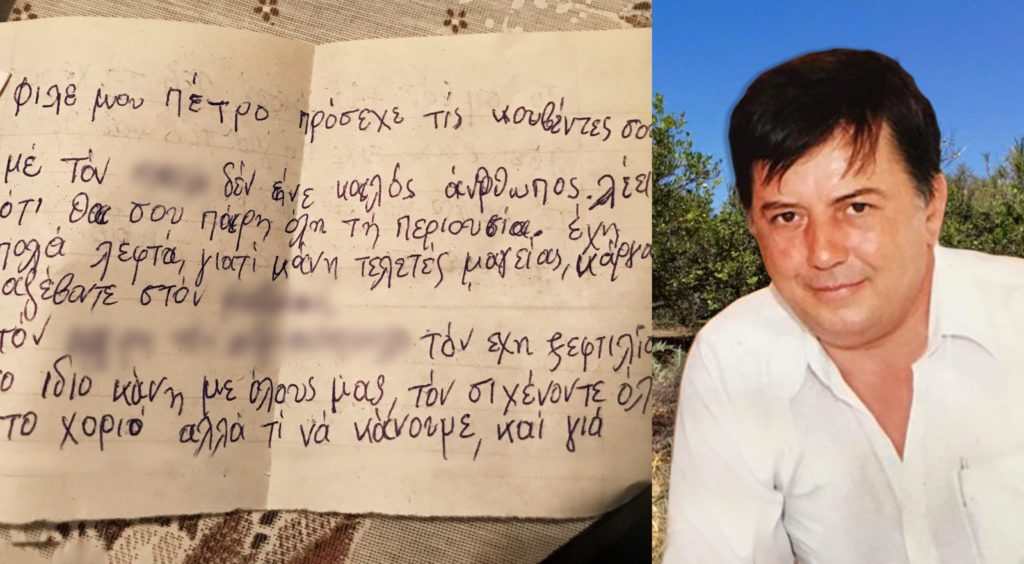 New facts about the heinous crime in Trizinia with the Athenian lawyer as the victim, were presented by "Tunnel" on the night of Friday, June 17th.
Share

Some left in the paternal home of Loukas Pitsilos, in the settlement of Psifta, a total of eight notes from his murder onwards.

The “Tunnel” presented the enigmatic and mysterious messages, written with a blue pen in torn packs, of different brands of cigarettes, found on the door of the yard of the house. Where the lawyer was brutally murdered in the early hours of April 24, 2021.

So far no one was able to send in the perfect solution, which is not strange. The first strange message is found by the victim’s brother, almost a month after the murder.

“The ***** know and have committed many murders, Luke is looking for…”

It is not clear at this time whether anyone was trying to inform him or disorient him.

Nine days later, the puzzle becomes even more complex. He finds at the exact same spot a second torn pack of cigarettes, hung from a string. The brand in the package is different…

“Police cover *****, Albanians have seen a lot. Silver race Friday on the stream… »

The victim’s brother as the unknown author even in this way gives specific information, informs the Authorities when another note arrives at the side of the locked gate. This time in a different pack of cigarettes, naming a specific person…

Wireless silence follows. The unknown author hits again a few months ago with a new series of handwritten letters in pages from a notebook, this time to the victim’s brother.

“My friend Petros, watch your conversations with *****, he is not a good man. He says he will take all your property. He has a lot of money because he does magic ceremonies and they gather at ******. ***** has disgraced him, the same happens to all of us. “Everyone in the village hates him, but what can we do?”

In each case, they have seized it, despite obstacles we can scarcely imagine. ” A group of homicides was found again in Psifta of Trizinia, collecting new data and testimonies.

Graphologist: The person who wrote them seems to know…

The “Tunnel” addressed the forensic graphologist Magda Kampouri for these notes.

“The comparative comparison shows that he is the same person. They are written with the same character, with the exact same identifiers and peculiarities that can classify them in a specific graphological identity. From the way they are written, it seems that he is an old man. The process with which it has been written, the structure of the letters but also the way and the structure of the meanings, refer to a person of low education “, said Mrs. Kambouri.

The experienced graphologist did not rule out the fact that the person who wrote them, had used this type of writing, in order to lead the research in a specific place in Trizinia and to specific people.

Read details about the case and the in-depth investigation of the “Tunnel”, here.