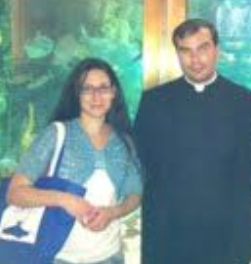 The American priest Christian Kappes claims that he is in Germany and according to his statements his Greek girlfriend Ioanna Lekakou is with him too.
Share

Those who spoke with him by phone, give the image of a panicked man hiding because he is afraid getting assassinate. Ioanna Lekakou who had disappeared along with him, hasnt been in contact with someone that she knows in Greece.

The sister of Christian Kappes Nadia, claims that he talked to her on the phone and felt Ioannas need, to aloof all those who want to threat her heritage. Nadia Tsarkap Kappes said that his brother seems to have suffered a traumatic shock. She worried whether Christian overdue return close to his family «because at this stage he does not trust anyone.»