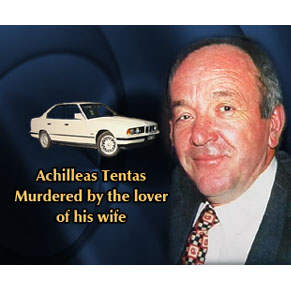 On December 8th 2001, 58 year-old merchant of leather goods from Volos, Achilleas Tentas was murdered in his own house in Almyros by the lover of his wife, Nikolaos Kotoulas.
Share

Him and Maria Tenta got rid of his body by throwing it in a well situated at the same area. They also left his car at the port of Volos so as to make people believe that Tentas had left on a journey. She had secretly given her mother-in-law sleeping pills so as not to understand what was happening. The wife being calm, reported the police his disappearance and pretended at her children, relatives and friends being anxious. But that didn’t convince ‘Tunnel’. In the beginning, she denied participating at a research TV show. Four months later, when her children realized there were no living signs of their father, they pressed her to come to the TV show which ended to be fatal for her and her lover! She appeared on camera as the last witness who saw the missing person. Her nervousness, her anxiety and her acting abilities became immediately perceptible by Angeliki Nikolouli. The strange sound that prevented her speech and was recorded by the camera, derived from her hand which, inside her pocket, was tearing a tissue! Before even the show was broadcast, the journalist was sure that the wife was responsible of Tenta’s disappearance. She gave to the Authorities all the evidence that came up during the TV show about the suspicious actions of the secret couple during the night of the murder. A witness saw their efforts to shut a well right after the disappearance and talked to ‘Tunnel’. Few hours after the broadcast of the revealing TV show, policemen arrested the couple. Anxious for the research of the show, they met in the middle of the night with no precaution. They admitted their violent crime after a couple of days. They were both sentenced first degree to lifetime imprisonment. The same sentence remained at the second degree Assize Court. On October 2010, Tenta presented herself in front of the Mixed Jury Court of Appeals of Larisa which canceled the sentence of lifetime imprisonment, accepting the claim of her lawyer for simple complicity in the murder of her husband and not complicity, as was the original accusation. Twenty one years imprisonment imposed on her. She has already completed the 3/5 of her sentence.