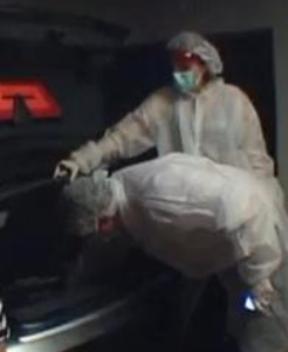 Everything changes in the case of the abduction of 26 year old Marios Papageorgiou...
Share

…with the reveal of the undisputed documents recorded by the camera of «Tunnel».

The case of the kidnapping returned to the investigating judge for further inquiry based on new shocking evidence of Tunnel which are uncovered and show that Marios Papageorgiou is not alive. Lawyers note that the new evidence is sufficient to invalidate the indictment and the persons involved in the abduction be confronted with the heavy charge of murder. The next step is to define the justice expert who will check the new evidence found in the car of the unfortunate Marios. Any new investigation would be attended by geneticist – technical adviser of the family Mr. Fitsialos.

See details at Watch at Tunnel

The announcement from the Hellenic Police

The investigation of Tunnel and geneticist George Fitsialos shocked public opinion and at the same time forced the Hellenic Police to issue a hasty announcement with only purpose to balance the negative climate.

Mr. Fitsialos referring to this statement clarified that the family of Marios Papageorgiou chose him as an expert of justice, saying that: “All investigations are complementary for the common goal to find the truth. We are all tools of Justice. These techniques are known. We didnt innovate, we did our job! “

To the questions of public opinion why the Hellenic Police did not use modern technology to detect the blood of Mary which was found after nine months after because of the show and the geneticist and why thinks that the case has been solved while the unfortunate young man is not found, the lawyer of the family Mr. Nikos Roussopoulos said: “The mother is interested in finding the child. She does not care if the Hellenic Police or anyone else find him. She is interested for the fate of her son.. “

The geneticist research in the trunk revealed not only the blood and the DNA of Marios but identified genetic material of others. The findings are considered as evidence for a new research from the Justice.

According to the legal criminologist Mr. Dermenoudis DNA from those who are under custody for the abduction of the 26 year old must be collected, and be compared with the genetic material that was found in the car, as provided by law. Something that has not yet been done.

The thriller of the sport agent

The methodical and deep research of the broadcast continues and in the case of sports agent Kostas Koliavasilis of Markopoulo who is been missing almost 14 months.

The family of the 48 year old missing requesting answers in serious questions, as the case has some similarities to that of Marios Papageorgiou.

The car Kostas Koliavasilis found abandoned in a deserted area in place Kouvaras the day after the disappearance. Although it was investigated by the Police there wasnt any additional information that would assist in the investigation.

Will the science give the answer in this case also that wasnt given by the authorities? Family believes that a second deep examination of the car with the new methods of detecting DNA, can shed light on the darkness.

See details at Watch at Tunnel

Vicky Romfea, 32 year old, who was considered as missing for her sister since last September and she was looking for her through the show, contacted with the Tunnel. The two sisters will come in touch in order to solve the problems which kept them in distance.

Unemployment and health problems made him disappear

At the same time the show was looking for the 28 year old Zafiris Karachalios of Examilia Korinthia. He got lost about forty days ago from the area of Nea Ionia. He had visited his brother in order to travel after to Korinthos. He is facing health and unemployment problems that had influenced him negatively.

Information that came at the show was referred to a young man with similar characteristics with Zafiris who moves at Athens center. The unit of external transmissions of the show searched the area without positive result.