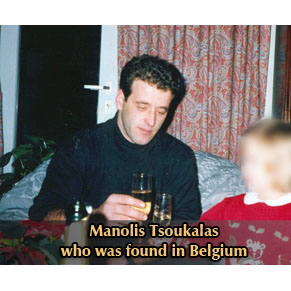 On Friday, June 29th of 2007, the show was looking for Manolis Tsoukalas aged 42, the Cretan who went missing on 2005 in Belgium.
Share

The ‘Greek hero’, as called by Belgian Press few years ago, went missing in a mysterious way after the death of his wife. Manolis Tsoukalas and some colleagues of him from the transportation company where they were all working, had saved Belgian families from a flaming building. Fifteen days after the live show, Manolis Tsoukalas was spotted by Greeks in Belgium and contacted with his family. He returned to Crete and lives with his relatives.