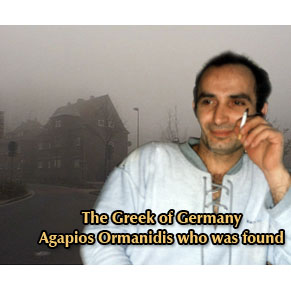 On Friday, January 25th of 2008, 'Tunnel' traveled to Germany and specifically to the region of Bielefeld so as to spot the tracks of a Greek man from Kilkis.
Share

Laborer Agapios Ormanidis aged 47, lived for the last few years at the city of Lipsant and had frequent communication with his sister in Thessaloniki. His tracks were lost for the last six months and his family was very anxious about his life. The difficult years of his family living abroad, the orphan hood and the adventures he experienced, had bonded Agapios with his brothers. His silence had stressed his family that was afraid of the worst. Agapios was found and communicated with his relatives during the live broadcast. He was found by Greeks in Germany who traveled to the city at night so as to tell him the news about his family searching him. He returned to Greece and his family.