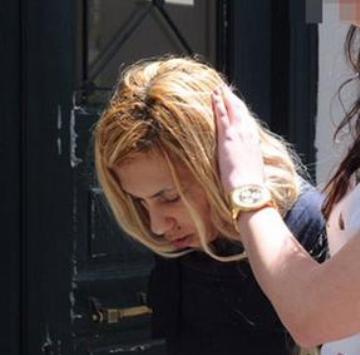 Under custody is after the agreement of the investigators and prosecutors Ntimitrina Borissova, after her apology.
Share

“I knew nothing about the fate of my child until police informed,” she claimed at her apology Dimitrina Borisova. At noon Thursday, May 7th the 25 year old woman apologized at the 10th investigating judge. As she nor even in her craziest of imagination could not conceive that the biological father of her child could be the murderer with such grisly manner.

In her eight pages apologetic memorandum stated that when she left for Berlin Annie would stay with her grandmother something which had happened in the past. By 8 or 9 April she spoke with her child on the phone. After that time the telephone was answering her partner who assured her that the child is well. On April 14 he asked her to return because of something bad had happened. She did not pay attention and assumed that he was stoned.

When she returned to Athens and found that the child had lost he told her that he did not noticed that Annie went out of the house. He proposed to go directly to Bulgaria and to inform her parents before lthey leran the disappearance from the media.

They traveled to Bulgaria and the 25 year old woman stayed at the hotel while he undertook to inform the grandparents of Anni as he had said. Later she realized that her partner was meant to ensure the silence of his friend Nicky who knew about the crime. Upon their return to Athens he persuaded her to concoct the story with the fantastic girlfriend to avoid any trouble with the authorities.

Borissova referred to her presence in the show “Light at the Tunnel”. She said when one witness informed that her partner had confided to a compatriot that had sold the child. Then her mind went immediately to evil. She argued that if she knew about the crime would not chose the road of publicity to disclose the disappearance of her child nor indicated the existence of Nikki, the witness who helped solving the case.

“I let my child go to her grandmother. I did not leave it to this cold killer.” She said and emphasized that she had fights the perpetrator but he never hit Annie.