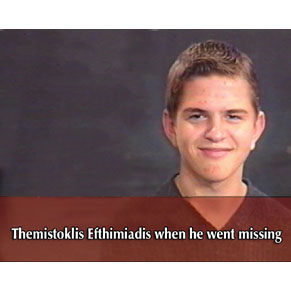 Themistoklis Efthimiadis went missing for the first time in 1997 at the age of 12 from Menidi where he resided.
Share

He was frequently leaving his house from the moment that he found out he was adopted. Initially, he was found by “Fos sto Tunnell” but since then, he abandoned his family many times. On the 30th of June 2000 he left but never came back this time. Since then, nobody had any useful information for Themistoklis. He is dark blond and he was 15 years old when he went missing. He was 1.65 meters tall.