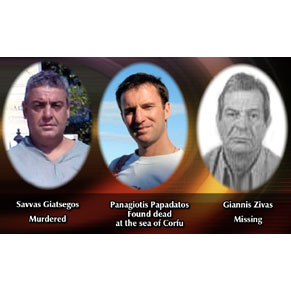 The disappearance of Savvas Giatsegos is murder, Justice says.
Share

He is the father from Athens who went missing during his appointment with his friend in a suburb of Zakynthos early morning on Sunday 14th of June 2009. The Prosecutor of Zakynthos as revealed on the show, filed a criminal prosecution against those responsible for murder, fraud and forgery.
There is no trace of missing person of the island, 63 year-old Giannis Zivas. The third one, Panagiotis Papadatos was found dead. He was murdered, according to police’s evidence. Reports about specific attacks from gangs in Zakynthos are taken under investigation. One of them is linked with the police Director of Zakynthos, who was found dead under suspect circumstances. Greek Police made a research using ‘Fos sto Tunnel’s’ reports and threw away policemen with illegal action. However, gangs continue their illegal actions on the island.

He sent an alert message

Missing Savvas Giatsegos, 51 years- old was very depressed because of some personal matters. He decided to leave Athens and live in Zakynthos so as to work in his friend’s business. His friend convinced Savvas to sell him his apartment in Kolonos, Athens and in return he would make Savvas his partner in his company. This cooperation didn’t go well and according to what eye – witnesses told us, Savvas was nervous and fought frequently with his friend. They arranged an appointment at the dawn of Sunday 14th of June 2009. They were about to go fishing. But, his friend claimed that Savvas never went to their appointment and started falling into contradictions. Savvas’ car was found in Tragaki, Zakynthos. Some people on the island leaked the story that Savvas set up his disappearance. They didn’t know that few hours before he goes missing, he asked his neighbor to call his children in case he wouldn’t show up until Monday. In that case, something bad would have happened to him. 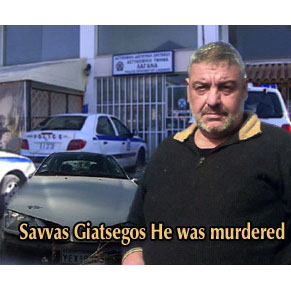