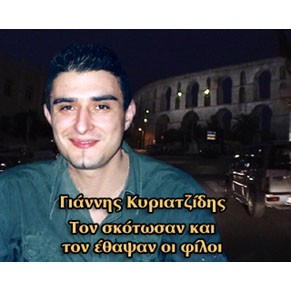 In the hands of the police dropped the third offender for the wild murder of the German Greek who remained free for eight years.
Share

Giannis Kyriatzidis 34 year old , was murdered in 2007 by his friends in the Kavala region where he lived. The case which had shocked the Greek public, brought to light by the “Tunnel”. Four years after the murder, Angeliki Nikolouli revealed the whole background of the alleged disappearance. The two actors are already in prison after their convictions.

The third according to the statement of the Police was arrested in Kavala, on 20 August. The offenses for the unlucky Gianni Kyriatzidis is murder and abduction with intent. At the expense of the offender were pending two other convictions for other offenses.

Details of how the “Light at the Tunnel  revealed the story can be found here.