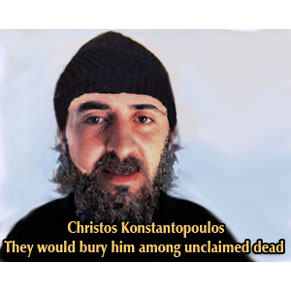 Christos Konstantopoulos aged 37, went missing on Saturday, October 18th of 2008 from Vrilissia where he lived.
Share

He had health problems and his brothers were afraid that something bad might have happened to him. After a marathon of researches, we found him dead, just before being buried. The young man had lost his life the next day of his disappearance. He was found in the sea, near Kythira. The Authorities at the report they made, wrote different age and height and so he was about to be buried with unclaimed bodies.