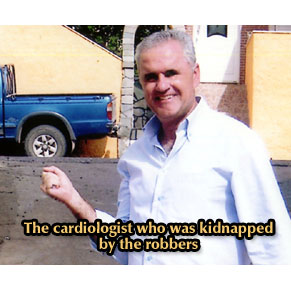 On Friday 13 of February 2009, 'Tunnel' dealt with the case that all country was talking about.
Share

Epaminondas (Nondas) Gerasimopoulos, 52 years old was kidnapped by robbers who got into his villa in Varkiza. This happened on Thursday 4th of December 2008 at around 22.00. Angeliki Nikolouli went to the house and talked with eye-witnesses. His wife, his two kids who were kept tied up and gagged by the robbers. She also spoke with his father in-law and searched thoroughly the whole area. The most crucial question is why the robbers had to wait in the house for over three hours in the family’s house putting them in danger. Why did they take with them the (even dead) doctor and why did they burn the two family cars. Eye witnesses who were found by ‘Tunnel’ gave important evidence which can solve the case. During the show, a taped conversation between the doctor’s wife and an unknown person who contact her, was broadcast. Special graphologist typed down the sender’s profile through the letters that were sent to the family. This person was probably a wag. After the end of ‘Tunnel’s’ episode, a lady phoned us and gave important material. The video from security cameras showed two robbers who are probably the same who hit the cardiologist and his family. The witness got upset when she heard the doctor’s wife describing everything she saw that night. The evidences that ‘Tunnel’ found, have to be examined by the police. A 35 year -old immigrant woman is likely to have played important role to this case. Also the behavior of the cleaning lady during all this time, provokes many question marks.