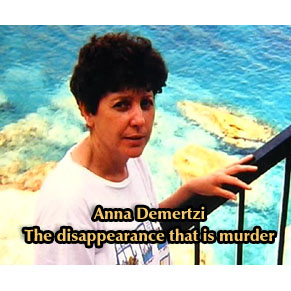 On Friday 20th of January 2006 'Tunnel' brought again to light the case of a 49 year old, missing mother from Thessaloniki, Anna Demertzi.
Share

She went missing on 8th of October 2004. The case can be solved by using the evidence which derived from the program’s research but the Authorities hesitate to proceed even though it’s obvious that is a crime. Everybody describes Anna as a dynamic and strong woman, who could solve every problem that may occur. Anna Demertzi used to walk from her home in Nea Mihaniona of Thessaloniki every day at 5 o’ clock in the morning. She was always going on foot to a nearby bus stop to embark on the bus to Pilaia. In that area, she was working in a cloth factory owned by a relative. Angeliki Nikolouli went to Thessaloniki and met the last man who saw her alive. This man is her 29 year- old son who described everything he saw the night at their home before her disappearance. He claimed that something unusual happened in the house during that night and specifically, some kind of spells that he had found, fact that his mother didn’t accept. He was determined to throw away the evil by any cost, as he said. ‘Tunnel’s’ research provoked the interest of the Prosecutor of Thessaloniki. The Attorney of criminal Prosecution asked to see the details that the show brought up and contacted the Homicide Section of Thessaloniki’s police. Despite the mobilization, the policemen didn’t dear to investigate the crime, because they didn’t find their body!