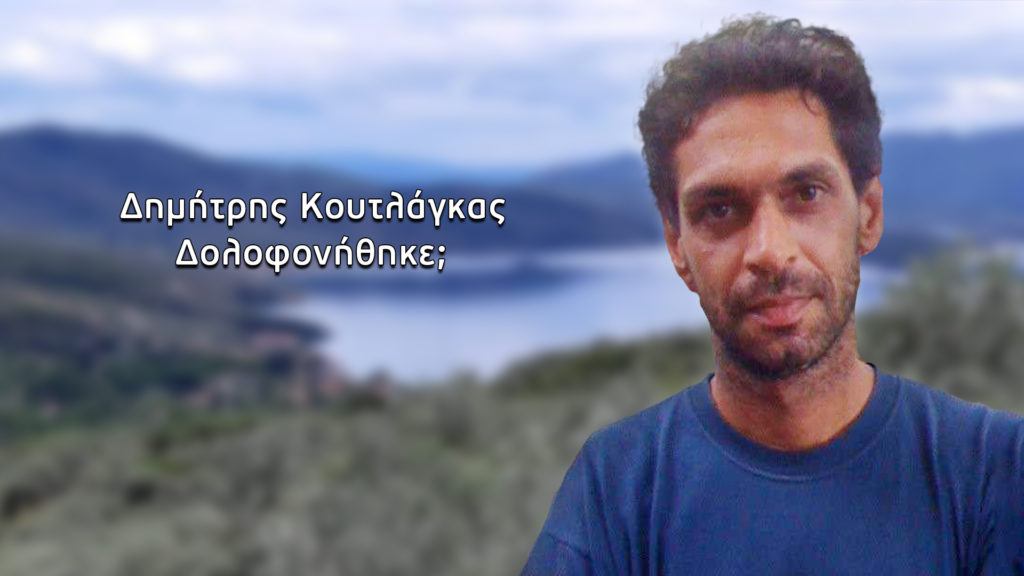 The show on the night of Friday, May 6, brought to light a new mystery case with victim, a well-known businessman from Volos.
Share

A set scene that “showed” a car accident, aroused the relatives of the restaurant Dimitris Koutlagas, 47 years old, who started the search to find the truth.

Two of his friends, who were together on the afternoon of February 4, 2021 outside his village, Argalasti, left him seriously injured at the Village Health Center, without answering the doctors’ questions about what had happened.

His mother was claimed to have been the victim of a car accident with his motorcycle on the provincial road Argalasti – Lefokastro, a deserted area, without houses and cameras.

When relatives and friends were at the place they were pointed out, they did not locate Dimitris’s camera and from there the thriller started. Hours later, villagers passing by the same area found her on the side of the road, with his personal belongings placed on it. Even the keys to his camera were in his jacket pocket, which was intact and carefully placed.

The unfortunate restaurateur fought for months to stay alive, but his severe head injuries led to his death.

The prosecutor of Volos, after the investigation of the police of the area, ordered a preliminary examination to investigate the possibility of homicide.

The “Tunnel” was at the scene and spoke with witnesses who are “keys” in the case. The contradictions and gaps in their testimonies reinforce everyone’s suspicions that something else happened that fateful afternoon.

The interest of the British Prime Minister…

The joyful mother’s struggle to learn the truth is moving. She maintains in Argalasti a well-known tavern with a history of about a century and famous customers. Among them, the bassist of the legendary rock band Pink Floyd, Roger Waters, but also the British Prime Minister, Boris Johnson. The latter was even interested in Jimmy’s “friend”, proposing his transfer to England for recovery.

The tragic mother Nikoleta Koutlaga, with tears in her eyes, spoke to the camera of “Tunnel” about the unjust loss of her son.

“To be the last mother to cry for her child. He told me “mother I will never leave you” and left without wanting to. From a young age he wanted to stay in the store and work on it together. ”

Referring to the tragedy that struck her family, she said that there were enough people who became aware, even the Prime Minister of the United Kingdom.

“I even got a call from Boris Johnson, the British Prime Minister, who has been a regular customer for many years, as well as his family. “He learned what had happened and suggested that when he recovered we take him to England to make him well.”

Mrs. Nicoleta also spoke about the “friends” who left him and were not interested in whether he was alive or dead.

“Those who were friends and customers in the tavern, I can not imagine that they got to this point, to hit a man. I was told by the Argalasti Health Center that he was thrown out of the car and that they disappeared.”

They at night the motorcycle at the scene…

Two witnesses who knew Dimitris also spoke on the show and located his motorbike in the area where the “traffic accident” took place. What is impressive is that he was not there at the time when the unfortunate man was being transported from the health center to the hospital of Volos, but it seems that he was placed a few hours later.

“Dimitris’s mother and brother called me, I came to pick them up by car and we left for Lefokastro. We went 20km on the road in case we found something, but we did not find anything, neither the motorbike, nor traces that testify that there was a traffic accident there. His brother took one of the three from Dimitris’s company and asked him at what point the accident took place. He mentioned the place to us, we went again and found nothing. On the way back from the hospital of Volos after 04.00 in the morning, we saw it in the same place that we had searched before. ”

The other witness, who found the motorbike around midnight, spoke to the “Tunnel” from the scene.

“Taking this turn, a friend of mine and I saw the motorbike falling. We thought that someone had an accident and when we approached, we recognized it and understood that it belonged to Dimitris. We went down and started looking. We found in the camera his jacket and the hat he usually wore. In his pockets were the keys. “It is impossible for someone to pass by and not see it, since it was in an obvious place”, the witness concluded.

What one of the witnesses says…

One of the three witnesses who was in the company of Dimitris at a summer house near the village, spoke to the “Tunnel”, but he did nothing but clear the already cloudy landscape.

“Dimitris came alone to the hut where we were. He was a very good child. He also brought a bottle of tsipouro and then left. Instead of going to Argalasti, he headed to Lefokastro. I do not know why he got up and left abruptly, there was no commotion or anything. One of the group found him lying on the street and the other went to help, I sat in the hut because we had the fire lit. They took him, transported him by car to the health center. “I was not there,” the witness said.

He denied the possibility of a quarrel, while he could not give an answer about the keys of the camera, which were found in the pocket of the victim’s jacket.

The testimony of the second “friend” about what happened…

The show also located and spoke with another “friend” of the victim, who was with him that fateful afternoon.

“I have told the police everything I know. Ask to be told. ”

With the journalist asking him:

“Right out here,” the witness replied, with the reporter wondering:

“In February, were you sitting outside?”

“Dimitris and I were not the only ones. We were fifteen people from an early age. I have told the rest to the police. S **** at some point left to get food. “Dimitris had left earlier”, he said, causing the journalist’s impression, as it is not in line with the testimony of their other “friend”.

“Our friend found him on the ground and alerted us. That’s all. When we went, the motorbike was off the road, in the grass. Dimitris was next to him and we ran to the health center. Since then, instead of saying thank you to us, both his mother and his brother have been bullying us… Anything you can imagine. Possible; Anyway. “Our only mistake is that we did not call an ambulance,” he concluded.

What did the main witness who found Dimitris testify?

The witness who, according to him, located Dimitris severely beaten at the spot, says in his testimony.

“I went to the hut at one in the afternoon. ***** and ***** were already there. At three o’clock Dimitris also came. We drank wine and he had brought tsipouro with him. No episodes were created between us. I left at some point to go to Argalasti to buy cigarettes and food. When I returned I saw that Dimitris had left. The others told me that he left shortly after me on his motorbike. I do not know exactly what time he left. At 19.00 I located him on the edge of the road to Lefokastro, on his back and without his senses. I called my friend who has the hut and he came to the spot himself. “We put Dimitris in the car and took him to the Argalastis Health Center”, he stated characteristically.

One of the family’s lawyers, Maria Vagena, spoke to “Tunnel” about the course of the investigation in the case, but also about the “hot” questions that have arisen around the circumstances of the unfortunate man’s death.

“No charges have been brought against any specific person, but the competent prosecutorial authorities are investigating the existence of any criminal acts against the victim. If it was a simple car accident the case would have been put on file. There are several gaps for the time, place and conditions under which the camera was found, the victim’s jacket that was placed in the place with the keys inside, ie events that are not compatible with a car accident. In addition, no such features have been found on the road to indicate that an accident occurred there. Serious questions that must be answered in order to have a clear picture for the relatives, but also for the local community of Volos. “If he has been lost as a result of a criminal act, Justice should be brought to justice and any culprits should be punished,” said Ms. Vagena.

A friend of the undefeated man also spoke on the show, describing him as a philosopher who loved the world very much.

“Dimitris can not return, but Justice is the only thing we can give him and his family.”