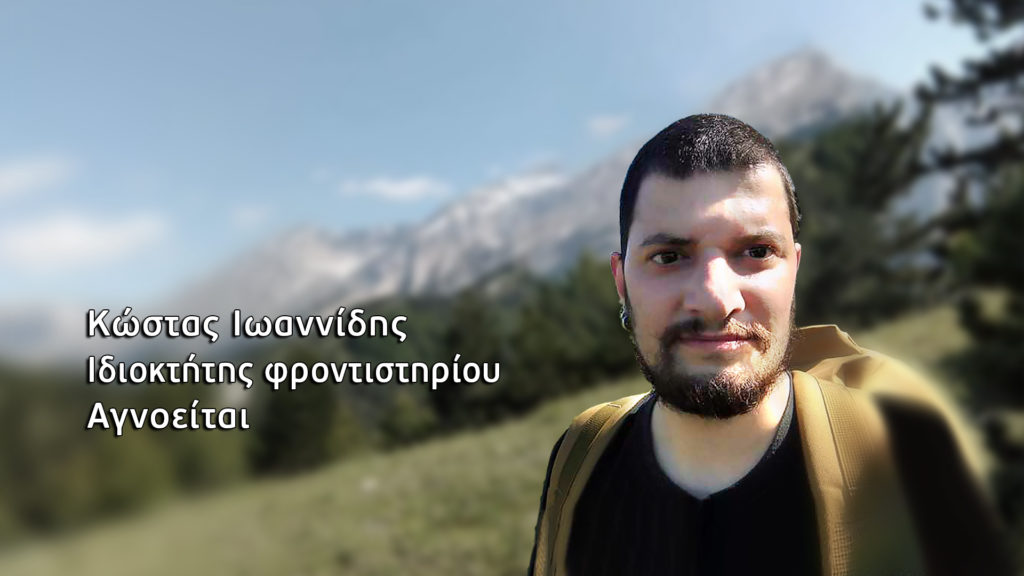 The personal belongings of Kostas Ioannidis, 36, were found scattered on Mount Olympus, where he used to go mountaineering. The traces of the father of a boy, just a few months old, disappeared on Saturday, July 3.
Share

Ioannidis, who lived with his wife and child in Kallithea, Pieria, was a nature lover and used to go on frequent excursions with his wife or alone.

That morning, he asked his father to take him out of Litochoro, to the place of Agios Ioannis of Olympus to start the hike. His father would pick him up on Monday from where he left him, at the start of the mountain.

On that day, an Olympus Mythical Trail was held on Mount Olympus. Much of the route coincided with the area where the missing person moved. At least 128 athletes took part in the race, several of whom met him at different times.

Two days later, when the alarm for his disappearance signaled, EMAK located his belongings scattered. His tent, which he had not set up, his backpack, in which his mobile phone was turned off and his tablet. One hundred meters from where his hat was found, which he never took off, his T-shirt and some bottles of water.

“His things were found neatly behind bushes…”

The TV crew of “Tunnel” traveled to Olympus in order to do field research. There he spoke with the organizer of the race, Lazaros Rigos.

“All the kilometers he used to travel were part of our race route,” said Mr Rigos, adding: “There was a support and supply station at Tsouknida, so we had volunteers at the place where they met him.”

As he describes speaking on the show, when they saw him he was about eleven to twelve at noon and he had his bag with him.

According to the volunteers, Konstantinos stood for a while, took off a raincoat and continued on his way.

Another climber claims that he probably saw him at dusk.

What thickens the mystery surrounding the 36-year-old professor’s disappearance are his things that were found scattered.

“It is not possible to leave the backpack and the tent behind bushes, your clothes neat and folded”, says Mr. Rigos with emphasis.

“A veil of mystery exists here…”

The organizer of the endurance race, Lazaros Rigos, together with the journalist of “Tunnel” followed the path taken by the professor on the day of his disappearance.

They started the ascent from Ai-Giannis, where it is located at an altitude of almost 600 meters.

Throughout the route there are signs and signposts that help climbers not to lose their way. In fact, as Mr. Rigos explained, this route also has night signage.

He states that the 36-year-old teacher was aware of the route while he has rejected the possibility of him getting lost. On each of his hikes in the mountains he had GPS recorders, with which he recorded trail routes.

What worries him and raises questions is the reason he left his backpack.

“You can leave the tent. You do not leave your backpack. It has all your things inside. Water, food, telephone, a small pharmacy.”

The testimonies of the volunteers are very important and as it was revealed on the camera of the “Tunnel”, they are the last to see him on Olympus.

The first volunteers left around nine in the evening and the last ones around ten to eleven. Nobody saw him again.

The searches with a drone and a specially trained dog were fruitless, while volunteers who descended tied to ropes where there were cliffs did not find any evidence that Konstantinos may have had an accident.

“For days, all the dangerous points of the disputed route of about three kilometers were thoroughly searched”, explained the organizer of the race.

What does the athlete who last saw him say…

One of the athletes who took part in the endurance race that took place the day the young professor disappeared on Mount Olympus, seems to be the last person to see him.

Speaking to the camera of the show, he referred to the meeting they had, but also to some important details.

“He was going down the slope and I was going up. We met, but we did not exchange any conversation. I was a little confused at first, but then I continued normally. Where I saw him but also in the nearby area there is no dangerous point that could have an accident and fall. We do not know how he moved and thus it is not easy to find out what his position is if something happened to him. As far as I know he was an experienced climber, so I do not think he could have easily lost his bearings. There are many gaps, anything can have happened to him,” he concluded.

The “Tunnel” spoke with neighbors of the missing professor in the village of Kallithea, Pieria, where he lived with his wife and child. They speak of a quiet and kind child, a man who loved his family and never caused problems.

“It’s a very strange situation. He cannot has left his things. There are no cliffs in that area, Costas was very careful, I do not think he had an accident. These are places he knew very well. The mountain was quite crowded that day because it had an event. Something else happened. A lot is heard about Olympus. He may saw something he should not have seen,” a neighbor of the missing man told the show.

Another neighbor talks about an experienced climber who was passionate about what he was doing.

“I wonder if something happened and someone hit him. He loved nature and the mountain very much. He was going there with his wife and often alone. I cannot imagine that something happened to Costas. I was very upset when I heard about the disappearance. All we want is for him to be found,” he told the Tunnel.

“This man must be found…”

The uncle of the missing Costas, speaks on the show from the house where the young professor lived with his family.

He states that all he cared about was his wife and child and he was going for walks in nature.

“He was constantly putting videos on his cell phone with his child and was just staring the screen. He loved his wife very much, he was calling her name and dripped honey from his mouth. It is a sin to lose such a person, a family man. He must be found, because we are all upset. I had been seeing him happy lately and he even told me to go to the mountains with him if I wanted to.”

In a telephone conversation with the show, Giannis Ziakas, chief firefighter of the 2nd EMAK, stated that extensive investigations were carried out with specially trained dogs and unmanned aircraft.

“If asked, we will do new research on Mount Olympus to give the answer to his family,” he said.

For his disappearance Silver Alert has been signaled.