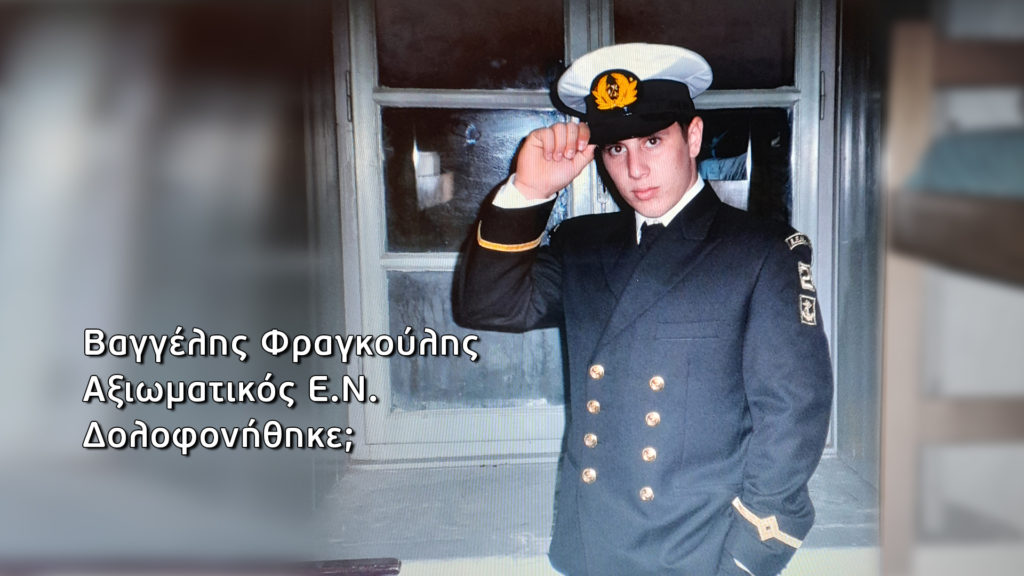 "Tunnel" traveled to Cyprus for the first show of the season to investigate a case - thriller, with victim a Greek officer of the merchant navy.
Share

What happened to the young Greek could not even be imagined by the minds of imaginative screenwriters.

Vangelis Frangoulis, 29 years old from Poros, was found dead on Saturday, October 3, 2020, in the warehouse he rented at 10A Hephaestou Street, in Limassol, Cyprus.

His diving knife was nailed to his heart. A few hours before he was celebrating with his friends the diploma he got in free diving. The video in which he presented himself with humor, caused horror.

The lieutenant was found dead by his brother who was looking for him. He was sitting in the antique car that he was restoring in the garage-warehouse, on the right side, in the driver’s seat (in Cyprus the vehicles are right-hand drive). His right hand was resting on the driver’s door as if he would go on a ride, while he was wearing his sunglasses.

A little while earlier, drunk as he was from the party, he went to his friend’s house to ask for explanations because he believed that another man had entered her life.
There are many scenarios for who might wanted to harm the 29-year-old captain. The crime scene “speaks” and “shows” a well-established scene, which the authorities ignored, as reported.
Instead of investigating the crime scene in depth and calling the medical examiner, they rushed to “baptize” the incident as suicide.

“He was killed or moved here…”

The criminologist Dimitra Tsitsi, who was appointed by the mother of the unfortunate young man as an expert, spoke to the TV crew of “Tunnel” who traveled to the island of Aphrodite to investigate this strange case.

“For me as a criminologist, it is not suicide, but a crime. A suicide cannot be done with more than one knife,” she said.

“However, even if we accept that it was suicide, there would be, if nothing else, the imprints of the deceased on the knife. It seems to me a crime which was committed” by mistake “and afterwards they set the stage for suicide”, concluded Ms. Tsitsi.

The stepfather of the young captain, shocked, can not believe everything that happened and describes the horrific moment when he saw him dead.

Medical examiner Loizos Nikolaidis, appointed by the family of the unfortunate young man as a technical consultant, analyzes the circumstances under which he was found dead.

“It is very difficult to remove the knife from a wound and put it back in a vital organ two more times. The deceased rested his hand on the car window, as he was going on a ride. I do not know if there has been another such incident in the past,” he told the Tunnel reporter.

An important element in the case is the large percentage of alcohol found in his body, as this shows that he would not be able to do something like that.

What did the witness hear at the crime scene?

A neighbor speaking on the show’s camera referred to an incident that struck her and unfolded on the day of the crime.

“That day I heard very loud music coming from the warehouse where Vangelis was. It was heard from 14:00 at noon until 16:30 in the afternoon. Then someone turned it off and about two hours later he was found dead,” she said.

“I was impressed that the music was playing loudly and shortly after the body was found. I did not have visual contact with the warehouse, so I can not know if anyone came in or out,” she concluded.

According to the medical examiner, Vangelis died between 11:30 and 12:00 in the morning, so he could not have played the music.

What does his brother say about what happened before…

The brother of the deceased captain described in great detail everything that unfolded before and after he was found dead in the warehouse.

“He told me to go diving together. Around 06:30 in the morning he sent me a message that he was going to his ex and I decided to go too to prevent anything from happening. When I arrived they were talking to the girl and her father. It took over an hour to convince him to leave. We would be there the same afternoon to talk together,” he said characteristically.

“My brother parked in the warehouse and I went to talk to him because he left very nervous. He then told me: “You are no longer my brother. I had two who accused me, a third came, you, instead of supporting me”. We just spoke, we did not hold hands. Then I left, went home and slept. The afternoon my wife and I woke up, we said to go over there to see what he was doing. I called him and because he did not answer, I opened the latch by putting my hand through the shutters. I found him in the driver’s seat “, he added with tears in his eyes.

He blamed the police for omissions and mistakes made.

“It is not possible for the police to simply close a case like suicide without conducting an investigation. We are not talking about a robbery, but about a human life.”

“I am doing my own research, I will not stop until the truth comes to light. Mother’s instinct can not be fooled by anyone. I hope we will soon have the answers we are asking for,” the tragic mother said in connection with “Tunnel”.

The doctor geneticist – molecular biologist, George Fitsialos during the live show said that even now an in-depth search can be done in the car and in the garage for DNA detection, as long as the space remains intact.