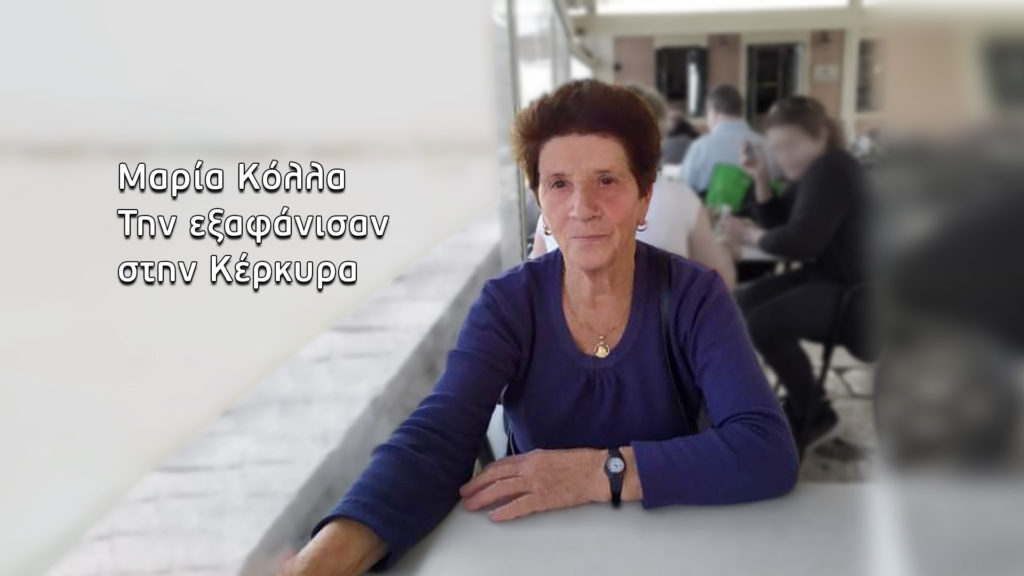 The disappearance of the mother Maria Kolla in Kokkini, Corfu, is evolving into a thriller for strong nerves. Her traces mysteriously disappeared on Monday, September 6, and the scene in her house looked as if someone had taken her out suddenly.
Share

Police are investigating all possibilities, with the most probable one being her murder.

Men from the fire brigade and the police, literally “plowed” an area close to her house with digging machines. These fields were of particular interest mainly due to some differences that the missing woman had with her fellow villager but also because of the stigmas that the Authorities had from a trained dog.

A specific person who was examined as a suspect for her murder, pointed out a place which was investigated but to no avail and he was released.

In relation to the lifting of telephone privacy, the Authorities already have some results in their hands but they are also expecting additional ones. Laboratory tests to locate her genetic material in areas where police believed her body may have been transferred did not yield any answers.

The Police have proceeded several times with apprehensions and examination of suspects, without any evidence against them so far.

Her children and relatives appeal to anyone who knows anything, to speak so that they can find her and put an end to their agony.

“I lied that I killed her and buried her…”

The neighbor of the missing person in Corfu spoke on the show, who while initially claiming that he killed her and buried her, in the process denied what he said.

“Sometimes the police do not do their job properly. Because I was the last person to see her, they thought I had hurt her. I told them that if they wanted me to lie to them, they would have the lies they wanted… I had to lie. I told them where to dig to find her, from the torture I went through. I have not killed even an ant,” said the “key” – witness, while describing the missing woman as a dear woman who helped and supported him whenever he needed.

“She supported me more than my mother. My family is Maria. I do not want to believe that she has been killed. She did not have any problems with anyone,” he concluded.