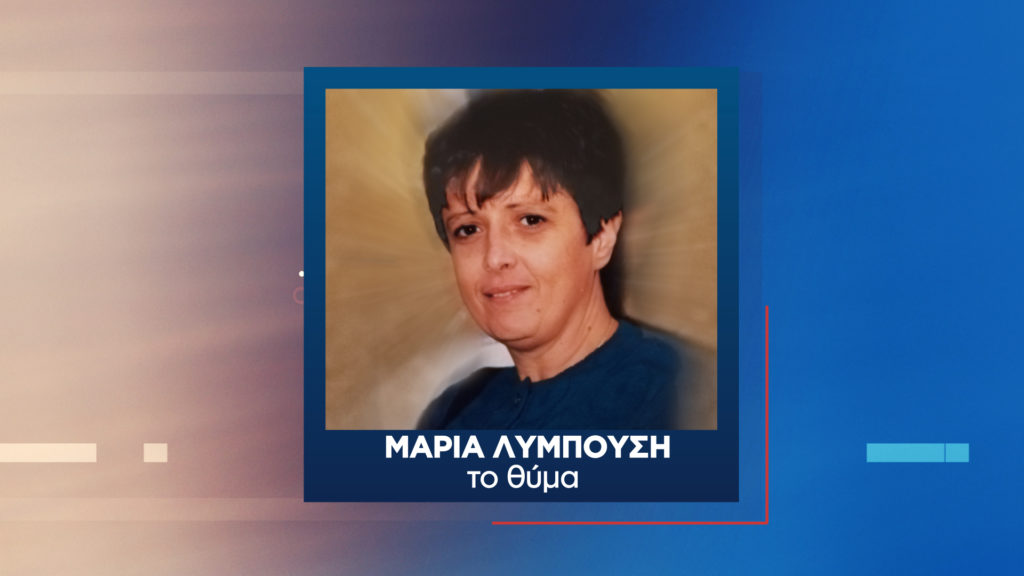 "Tunnel" investigated the thriller of the Principal of a school in Paleo Faliro, which took place in Chios and shocked the residents.
Share

The hard hit on the head, the suspicions and the closed mouths, compose this new case of mystery.

The relatives of 65-year-old Maria Lympousi, who was on her island to visit her sick father, turned to the “Tunnel” in an attempt to find answers to the “burning” questions…

Who and why hit Maria violently on the head outside their paternal home in Kallimasia, Chios and left her helpless?

Since the morning of April 3, 2019, when she was found fatally beaten, they have not stopped searching to find a light in the dark.

The strange thing about the whole case is that while there is traffic in the area of ​​Agios Panteleimon, no eyewitness was found who saw what happened.

Doctors from the hospital of Chios, where the unfortunate teacher was taken, were surprised by the violent beating and expressed to her brother the concern whether it was a criminal act.

Authorities spoke of a car accident with abandonment. They claim that a driver hit her and left her helpless on the side of the road. However, on Kallimassioton Amerikis Street, where she was found, there were no signs of braking or other signs that indicate a car.

She was lying on her side, with her right side resting on the ground, on the edge of the sidewalk, while her slippers were half a meter behind her. This is what impresses the people who knew her; because they knew that she never left the house, wearing slippers.

The fact that the housekeeper who was taking care of her sick father did not see her leaving the house that morning, nor did she hear any noise or voices, also raises questions.

The unfortunate woman was transported in a coma by EKAB ambulance to the “Skylitsio” hospital, where she died on April 8, after five days of treatment in the Intensive Care Unit.

The medical examiner spoke of an overwhelming head injury and blunt force injuries in the limbs. She died of craniocerebral injuries.

For her family the blow was double. Her father, who “felt” her death, stopped eating and a few days later, he also died.

“She was hit badly in the head…”

“We do not know exactly what happened. It is unprecedented for the village, such a thing has never happened before. “It remains an unsolved mystery,” said a neighbor of the victim.

The cousin and friend of the unfortunate Maria Lympousi, who lived next door, spoke to “Tunnel” about what happened that day.

“I saw her on the sidewalk, they had moved her. She was turned to the side, alive and hit in the back of her head.”

“She had her skull hit. This must have been a violent one,” said a doctor at the Chios hospital.

From the paternal home of the unfortunate woman in Kallimasia, Chios, where she used to spend her summers, her brother spoke to the camera of the show about her ethos and successes.

“She was one of the best in general. She entered her school with honors, attended a postgraduate course and became a school principal in Paleo Faliro.”

The family was stigmatized by another incident. A few days after Maria’s unjust loss, her father refused food and passed away.

“The housekeeper left the next day…”

From the spot where the unfortunate Principal was found hit, her brother spoke to “Tunnel”.

“I do not know what happened. It’s a shock out of nowhere. I was told by the hospital not once, but twice to look into the possibility of criminal activity,” he said.

A doctor of the Chios hospital and a friend of the victim stated that “at that time the house keeper was inside the house. The house overlooks the spot. Usually in the villages if you hear the slightest sound, you go out to check what has happened. Such a blow that went unnoticed, I have not yet understood. It could be a car accident, it could be a crime, but I rule out the possibility that she fell from the balcony. It strikes me that at such a time no one heard anything. ”

The victim’s cousin and neighbor spoke to “Tunnel” about what happened that fateful day.

“He was at home with the housekeeper, they drank coffee together and then Maria left without saying anything to her. The fact that the next day of the event she left for another island, immediately found another job somewhere else in the Cyclades raises many questions for me. We just want to know what has happened.”

Doctor: “Did they hit her with a bat?”

Her cousin talks about a very loving, happy and sociable person who was willing to help anyone in need.

“She did not have any problems with anyone, nor a dispute with anyone from the village. Even if it is a car accident, from the moment you hit someone and get up and leave, it is murder. May God judge them”, a resident of the area told “Tunnel”.

The victim’s brother stressed that “there are people in the village who drink and drive.”

He appealed to anyone who knows anything, to help for the memory and soul of his sister who left so unjustly.

“As far as I know, she could not communicate to say who hit her,” said a doctor at the Chios hospital.

Housekeeper: I did not see or hear anything…

The “Tunnel” located the housekeeper who was staying at the victim’s house to take care of her elderly father.

“When the incident happened, I was at home in the elderly man’s room. They told me “get out, something happened”. I found Maria hit on the street and there were enough people. It was close to nine o’clock in the morning. “I am telling you, I did not hear anything, not a single voice, or anything else,” she said characteristically.

Asked by the journalist why she left the island, she replied:

“I used to work at home and take care of Maria’s father. Now I have left the island, I am in Athens. First of all for me this whole story was a big shock. Secondly, I could not stay in this house, I was afraid.”