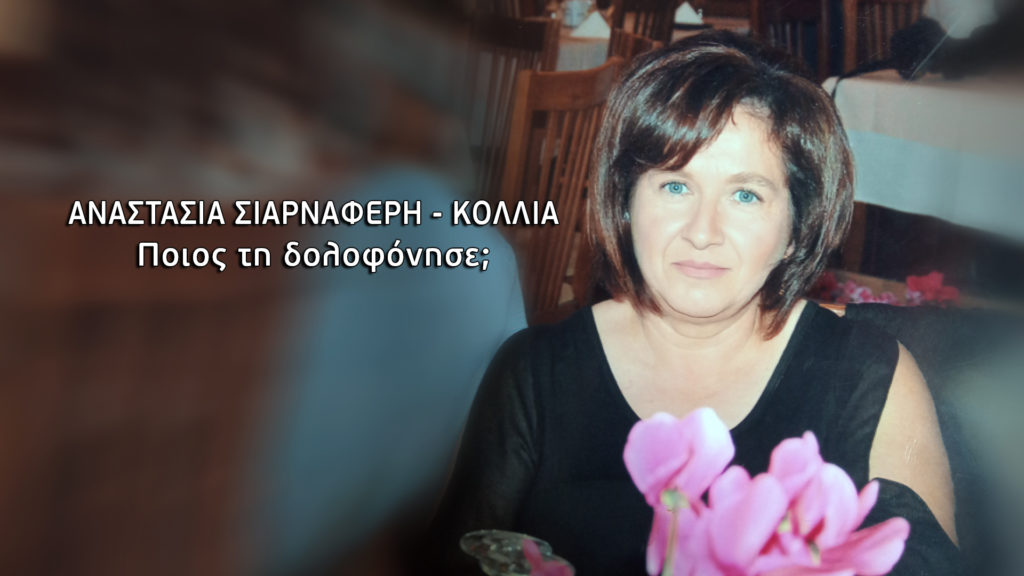 The intractable riddle of the mother of many children from Patras seems to be heading towards its solution.
Share

The judicial authorities of the city literally dug up the case after three years and are now investigating the murder of the unfortunate woman.

Anastasia Siarnaferi – Kollia, 51 years old, was found floating on “Kryfi” beach in Isthmia, on the morning of Friday, June 14, 2019.

Some then projected the easy version, that of suicide, without looking deeper.

The pre-mortem injuries found by the medical examiner and the possibility of the act of murder it left open, infuriated her family, who filed a manslaughter suit against strangers.

A criminal prosecution was brought and the case from September 2022, is being investigated at a rapid pace. The loopholes and omissions of the Authorities identified by the judicial investigation cause outrage.

The mother of four children went missing from Agrilia, Achaia, where she lived with her family and was engaged in livestock work. It was Thursday, June 13, one day before she was found dead in the area of ​​Corinth.

Her husband then found out that money from their personal accounts had been taken from her, for unknown reasons. Up until the day he disappeared, he was withdrawing money. No one knows how he got to Corinth and what exactly happened there.

Where and how were her details found?

Her bag with her money and her mobile phone was not found.

Two and a half years later, in November 2021, the Isthmian Port Authority handed the husband her identity card and her two bank cards intact and without further clarification.

Despite the family’s efforts to find out where and how they were found, the port officials had no answer to give.

While the judicial investigation is ongoing, the husband of the unfortunate Anastasia found a handwritten threatening note.

“Stop looking for me, you’ll eat your head.”

“Tunnel” after the latest developments, was in the area again and spoke with the victim’s husband.

“I found a note in the corral, it was threatening to stop the investigations. They are threatening me because I am looking for…”

Of the day that changed his life forever, Mr. Apostolis said:

“It was Thursday, 07:00 in the morning, when he left the corral. She started on foot and on the way a girl from the neighborhood caught up with her and took her a little further in her car. The other day they came here and told me that she was found dead in the Isthmias.”

The husband of the deceased Anastasia Kollia, speaking to the “Tunel” reporter, referred in detail to the threatening note that was left for him outside his corral.

“I found a handwritten note pinned to the door in the corral. It was written in pen and capital letters. It read: “Stop looking for me, you’ll eat your head.” I could not recognize the handwriting. I went the next day to my lawyer and then to the Security in Patras. They sent it for impressions to the laboratories in Athens. I didn’t say anything to my children, so they wouldn’t be afraid either and wouldn’t allow me to stay here in the corral alone. This is my job, I can’t leave,” he said.

As to who might be behind this action, he said:

“It is not easy for someone to pass by here to see something strange. I don’t know if the person who left it is from the village or from Patras. Someone was understandably annoyed that we are continuing the investigation and we might be close to the truth. I was picked up several months later by the police and told that no fingerprints were found on the note. I am surprised why even mine were not found… Something very unpleasant has happened that we need to know. My wife might have been involved, someone was blackmailing her. For him not to tell me, it must be something bad. He should have at least talked to our children, they were big then.”

He, with tears in his eyes, asks for justice, for the truth to be found and for the guilty to be punished.

“The gaps and omissions of the first investigation…”

The lawyer of the family of the unfortunate mother from Patras, Thanasis Diamantopoulos, speaking to the “Tunnel” camera about the judicial developments, said:

“Criminal prosecution was brought against unknown persons for intentional homicide. At the beginning there was a suspicion of suicide and this had the effect of delaying the whole process and losing valuable time in searching and finding evidence that could shed light on the case. Before the disappearance, around 20,000 – 25,000 euros had been taken in installments, without the family knowing the least. A bank de-confidential request has been made to see if the funds were deposited into a third party account.”

“We also found the following strange thing. Some personal belongings of the deceased were found and we do not know when or by whom. An autopsy report does not exist, as do many other documents. For this reason, we request that any document be presented by the Isthmian Port Station. In essence, the interrogation began in September 2022,” said Mr. Diamantopoulos, while regarding the threatening note, he emphasized:

“We gave it to the forensic laboratories in Athens for examination and no fingerprints were found. The document announcing the failure to find any imprint on it, where is it? We have not received it.”

“Since I learned of the death certificate, which stated the existence of multiple pre-mortem injuries, even though he was found in the water, as you understand it was not possible to stick to the suicide view. There is some additional evidence, which both advocates and constitutes sufficient evidence that the death resulted from a violent criminal act. We have an intentional homicide,” he said characteristically, while adding:

“From the road to the beach where it was found, no rocks intervene. If she had fallen from that point, i.e. the hidden beach, she would never have reached the beach because the trees in the densely vegetated area would have held her body. So it is impossible if it fell from where they say, to have these findings.”

The admiral coast guard Nikos Spanos, who was in the show’s studio, ruled out the version of suicide. He pointed out that if the woman had fallen from the Isthmus Bridge which some said, the picture of her corpse would be completely different.

“She took out money secretly, as if she was being blackmailed…”

The tragic husband tries to answer the big question about where the money went, which the unfortunate Anastasia withdrew over a three-year period.

Unable to hide his emotion and pain, he bowed before the camera, saying:

“It may be someone who was pressuring her and possibly blackmailing her. No one has given me a single answer as to what has happened. We take care of everything. Only you came and I thank you. As much as I want to stand strong, it’s not possible… If you can, help us.”

What were witnesses saying at the time in the “Tunnel”…

The fisherman, who found the unfortunate mother dead, spoke at the first “Tunnel” investigation. What made a special impression is that although he was an important witness, he was never called by the competent Authority to testify.