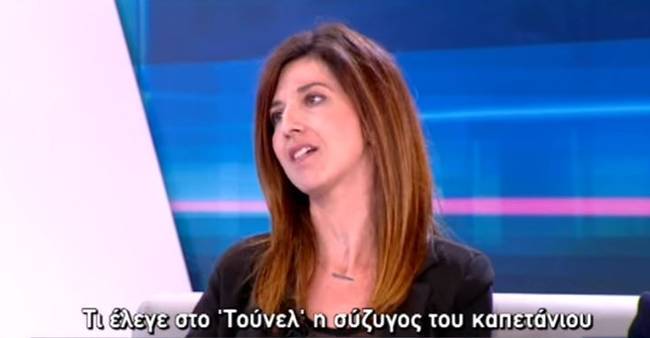 The "black widow" of Koilada appeared in the air and at the breaks of the show with two faces.
Share

While in live projection she appealed to find her husband’s killers, she had other anxieties in the breaks.
They asked some of the actors if she was right, if she made a mistake and if her performance on the show was good!

On 5 June 2015, Dimitra Voulgari, the widow of Captain Thanassis Lambrou, was hosted for the first time in  Tunnel. She had then described in detail her own version of exactly what happened on that fatal day before and after the murder. She agreed with the panel that her husband had not committed suicide as originally said, but had been murdered and constantly appealed to witnesses to talk to find the killers.

At the breaks of the show, she was saying to the victim’s parents’ lawyer that she “wanted to find a tip” by asking him “if she said it well”. The information arrived one after the other in the call center and she was anxious to ask the presenter for their content. A testimony said that in the past, Demetra had stabbed her husband in his hand.
When asked by that reporter she replied he had been cut from a broken plastic, saying: “You will hear a lot, that I’ve killed him, I’ve beheaded him …”
Speaking to “Tunnel” about the friend’s house in which her husband was found murdered, at first she said she had the key. She then corrected her sentence by saying that only her husband had a key and went to their friend’s house when he was missing.

Before turning of  the lights for the summer season on June 19, Dimitra Voulgari was again on the show. Aggeliki Nikolouli then referred to the rumors that circulated strongly in the region of the Valley and which incriminated various factions as the captain’s murderers. His widow was reacting by saying: “There has been a complete murder here and the murderers are released. Should the police tell us what has happened. “

In a journalist’s question about who would leave his own handkerchief never left, she said she could not think of anyone other than her husband.
When the retired police director  Thanasis Katerinopoulos took the floor and said that it would be a good step from Athens to help with the investigation to capture the murderer, the captain’s widow agreed. The policeman added that the items “cry out for themselves” and congratulated her on her temper. She then said she was optimistic that they would catch the culprits and help the authorities as much as possible to put an end to the case, so that their parents and daughter suffer.

During the break, Dimitra Voulgari addressed a relative who accompanied her, saying, “What do you see? Was I good? I taught them a little bit, but they had to – see the police officers. At the end, addressed to him, he asked him: “Are you satisfied with my performance?”