The lives of two women were ruined by an obsession and jealousy created by a rather insignificant occasion.
Share

The methodical investigation of Athens Police, who managed to unite all the pieces of the puzzle, led to the solving of the attack with vitriol that shocked whole of Greece.

In several places, the accused may not have cooperated during the interrogation and did not want to reveal everything, but she made an indirect confession, describing the path she followed in every detail.

The first meeting and the outburst of obsession

As for the motives of the 35-year-old perpetrator, it all started a year and a half ago in a social event that they were invited together, she and her partner and 34-year-old Ioanna. The origins of the two women were from nearby villages, they knew each other but they never had a close friendship, but they had distantly-related, since the sister of the perpetrator had been related to a relative of the victim.

At this wedding, where everyone was together, Ioanna met the perpetrator’s partner and he later added her to his Facebook contacts. This move alone angered the 35-year-old and was followed by an intense quarrel with her partner and an exchange of messages to Ioanna via Facebook.

Nothing more happened between them, but a short time later there was another internet communication between the perpetrator’s partner and the victim, resulting in a new fight.

This situation between the first and the second contact lasted a quarter and in fact the couple divorced for a while and then they found each other again. According to her partner, it was not a relationship with perspective, but the 35-year-old woman believed and hoped in this relationship and in the perspectives that she believed she could have.

For a while, it seemed that the whole issue had been forgotten, but inside her, the 35-year-old woman never calmed down and blamed Ioanna for the damage on her relationship, although nothing more had happened between her and the defendant’s partner, until she went so far as to plan every detail and carry out her plan of revenge, without even today showing the slightest remorse.

Initially, when police approached her 50 meters outside her home on Thursday morning, she was surprised and she did not believe that the authorities would ever reach her, and tried to escape unsuccessfully. In her bag were found the wig with the dark red hair she was wearing on the day of the attack and the phone card with which she had booked a taxi appointment to escape. 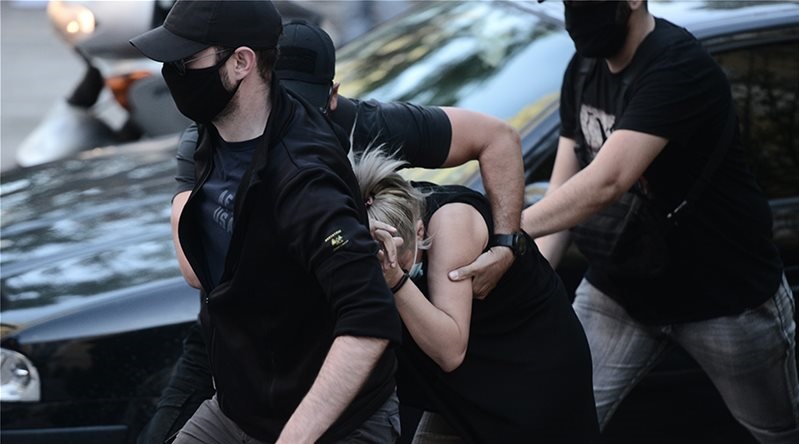 How did the authorities get to her tracks?

The police had managed to put this woman in the frame of their investigation 10 days ago, after they saw early on that the cycle and events concerning more recent cases in Ioanna’s life had a strong alibi and had nothing to do with the attack.

They had her picture clearly from the day of the attack and from a camera in Agia Eleousa, the moment she escaped. They soon discovered the taxi in which she boarded and left her in Mets, near a relative’s house, where she took refuge under the pretext of a visit, until the noise subsided and she returned to her home in Zografou, where she lived with her brother.

They discovered the call and had the recorded message and soon discovered the two telephone booths from which two calls were made to the radio taxi company that used it. One cabin was in Syggrou Avenue, where she got off a bus the day before and ordered the taxi to book it for two return races, the next day.

Then she walked to Theseus Avenue in Kallithea where she inspected the offices that would carry out the attack and in the evening he called with the same phone card from a telephone booth at the Academy Street near the offices of the law firm working on Sina Street to confirm the appointment with the taxi the next morning in Kallithea.

She went the same way, carried out the attack, and when police asked her for details she changed the subject, and also refused to say how she obtained the vitriol. After the attack she took the taxi and went to Mets.

When the police located the serial number of the phone card with which these calls were made, they proceeded to scan it and through it it emerged that in an earlier time the perpetrator had called a man from Bangladesh, regardless of the case and for an unrelated reason. The police located the specific person who told them that the specific woman had called him and in fact on his mobile phone they discovered her mobile phone number after she had called him through it.

Now the fence had narrowed around her. When police went to Thriasio Hospital and referred to this woman in Ioanna, it was the first time that she surprised but she was remember the story that had preceded them. She could never have imagined that this incident would be enough to provoke such an attitude against her in order to combine facts and situations and to report it by herself earlier to the Authorities.

Of all the cases that had initially been targeted by any of the investigators, none of the many individuals who had been testified by the victim’s wider circle had indicated this person. Her fatal mistake was the calls she made and the defendant could not have imagined that the authorities had the ability to discover and find traces of her even from the “crumbs” she admittedly left behind.

In the home search carried out by the police shortly after her arrest, they discovered the latest critical evidence, such as her coat, but also the backpack she was wearing on the day of the attack, in Kallithea, which has been clearly captured by the camera in the area of Agia Eleousa.

On Thursday afternoon, she was brought before the Prosecutor, who prosecuted her for attempted murder with intent and disobedience, and was given a deadline to apologize to the Investigator next Tuesday.