"Tunnel" investigated the riddle of the death of the unfortunate mother from Drama.
Share

The forensic examination in her corpse, arose a lot of questions…
More serious is the one with the fracture in the hyoid bone, which in forensic science refers to strangulation. Was it caused before or after her death possibly by the rescue team? – wondering the coroner Nikos Kifnidis who carried out the necropsy …
But his statement  … lit fire in the Fire Brigade.
“Tunnel” was found in the place along with “key”-witnesses  and the reportage is revealing.
It beleived that is impossible Dimitra Zirda, 57, to walk in the night a distance of three kilometers to reach the point where her body was found. She was afraid to get out of her house because of her health problems without company, even during the day …

The case of the mother for who her son was searching for  on Friday June 14 on the show has moved the viewers. A few hours later, she was found  dead in a stream in the area of ​​Galazia Nera near Simvoli of Serres, after she was lost  during the night from her house in the village of Fotolivos in Drama. 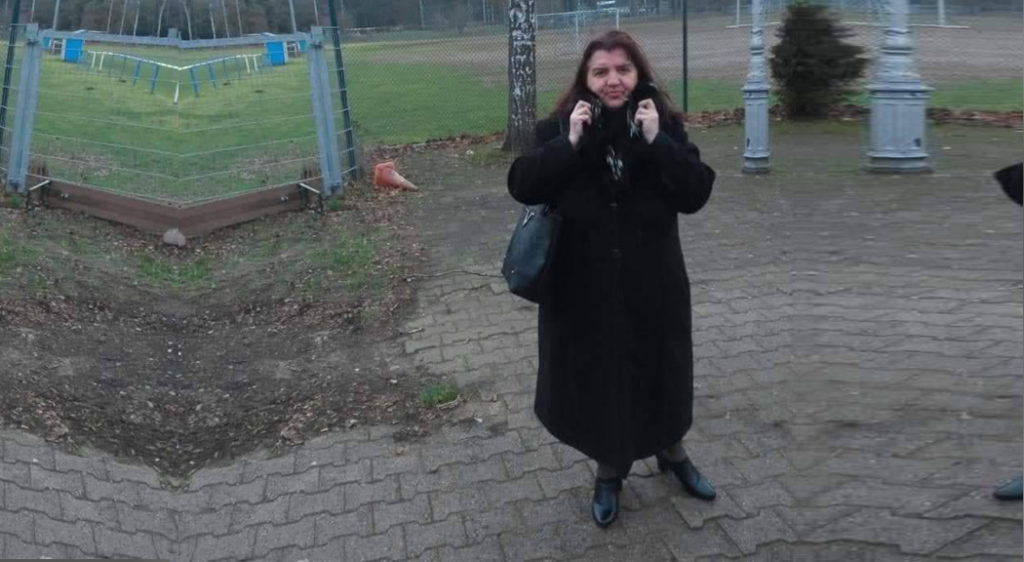 Coroner: I found a fracture in the hyoid bone …
Disclosure was the dialogue between Angeliki Nikolouli and the coroner Nikos Kifnidis who carried out the necropsy in the body of the unfortunate mother.
He said he was not asked to go to the place where Dimitra Zirda was found dead. He reported  that her death is due to pulmonary edema but with a question mark until the results of the histological examination clear the landscape.
In a related question by the reporter he replied that in her lungs did not find water, although her image clearly showed that she was in the  water for at least eight to ten days.
Coroner: “If I did not find the hyoid bone fracture, I would report that  the cause of death, with almost 90% confidence, was ” drowning in water “.
Angeliki: This is serious. We know that such a fracture refers to strangulation.
Coroner: Yes, but here we want to see if the fracture was before or after death. It could have been a post-mortem fracture due her  transfer from the rescue crews. What if they put a rope around her neck to pull her out  and pressed it down?
Responding to other journalist questions, the coroner stressed that he did not find any injuries to the lifeless body and ruled out the possibility that the woman to the point where she was found.
“I think she fell into the river, the water dragged her. Now the pulmonary edema, if it is true, can be caused by a problem with her heart. She could faint, fall into the river and drown, “the coroner concluded. 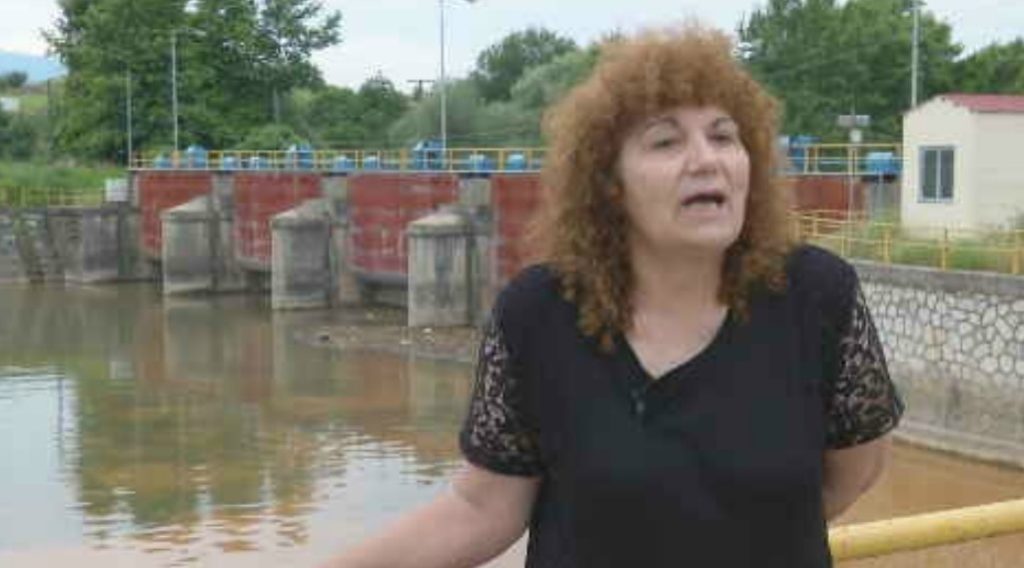 Tunnel’s research at the spot


Tunnel met at the point where the body was found one of the sisters of the dead mother who still cannot recover from the shock.
“Unfortunately our fears were confirmed but we did not expect to find our sister in these mess … All we want is to find the truth, and her soul rest in peace… How did she go so far away from her house? How did she come here? ” she wondered.
“We saw the place. You cannot walk there. The greens and thorns were not dropped down like someone had passed over them, everything was upright, no footprints were there. How was our sister found there? Please help us, “she said.
Tunnel also spoke to the resident of the area who spotted the corpse of Dimitrar Zirda. He showed in the show’s camera the exact point where the corpse was stocked between the branches of the trees. 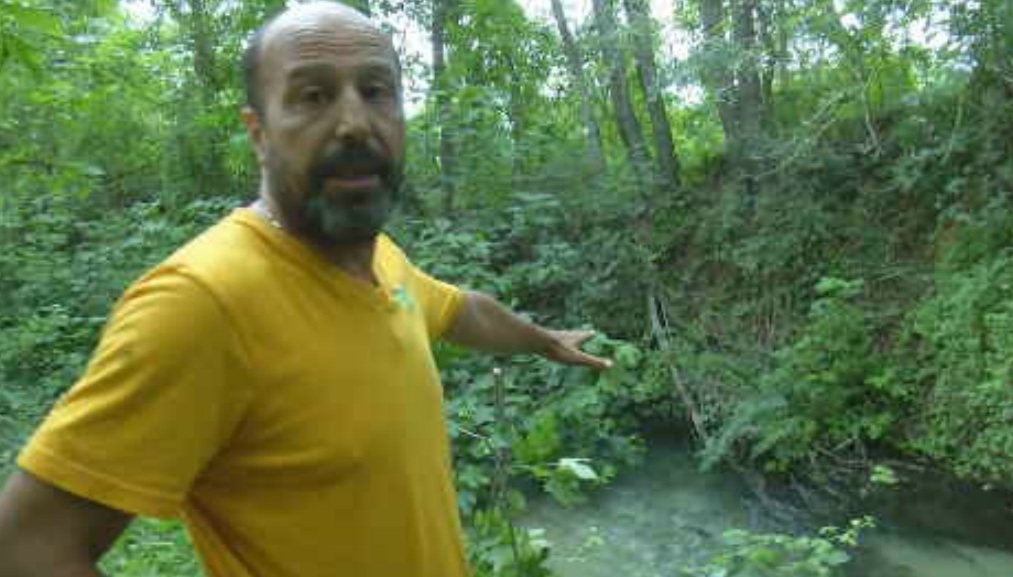 “I’d come down to the river for fishing. Here the waters are shallow. Where I was fishing I suddenly saw the woman’s body. At first I thought it was a bag, then I understood. She had snapped, you could see only her back, her hands were in the water. I immediately came out of the river and  found  a local police officer. We came together to the point and then he told me that it was probably the woman who was missing from Drama, “he said.
He explained that the place is difficult for someone to walk there and one should know how to go to the water. He said that there is another access to the river at a close distance.
“If someone tried to throw a man or object from there he would find it difficult. It is strange what happened, “he concluded.

The other sister of the victim, Chrysoula Dikamni, spoke to “Tunnel”. 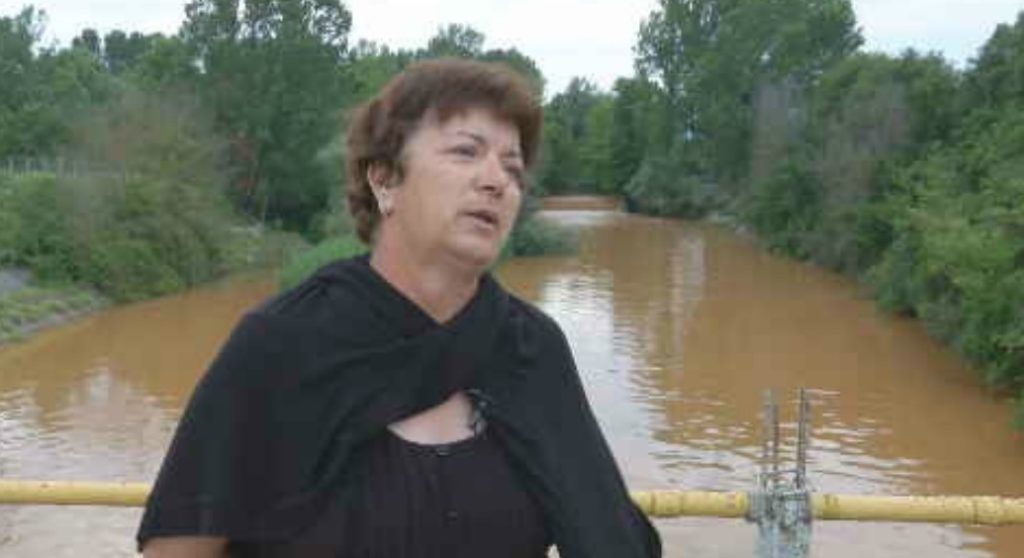 “It bothers me because she has not told me anything. One day she was in my house, then she left and went to the clinic and I did not know it. She had not spoken to me … “she said with a complaint.
Last time she takled with her on the phone one day before she disappeared.
“She told me that she had cooked chicken on that day and that she would cook  green beans the next day. At five o’clock in the morning my husband called me. He told me that at four and a half he went to the toilet, he did not find her at home, and  that she had left her mobile and her purse there.

In the studio was found the head of the Forensic Service of Piraeus Elias Bojokas who commented on the evidence that Tunnel brought to light  and mainly for the forensic findings.

“In any case, the histological examination will give the answer if the fracture in the hyiod bone was before death or post-mortem. Usually coroners do not give temporary responses, but it all depends on the evidence that arises. According to your report that I saw and I have a picture of the place, if the woman walked in the evening to the point she was found, she would definitely have marks on her feet. Injuries and scratches would also have had if she had fallen into the shallow stream from the stones or even if she had been dragged. If histological examination shows bleeding infiltration, it is strangulation. I has similar  case of strangulation with a towel where there were no signs at all, “he said.

Referring to the dialogue between the coroner and Angeliki Nikolouli, he said:

“I have never seen rescuers trying to pull a corpse off the neck, on the contrary they pay a lot of attention. In my opinion, the fracture did not come during the transfer. I should also point out that such a fracture can not come from a fall. “ 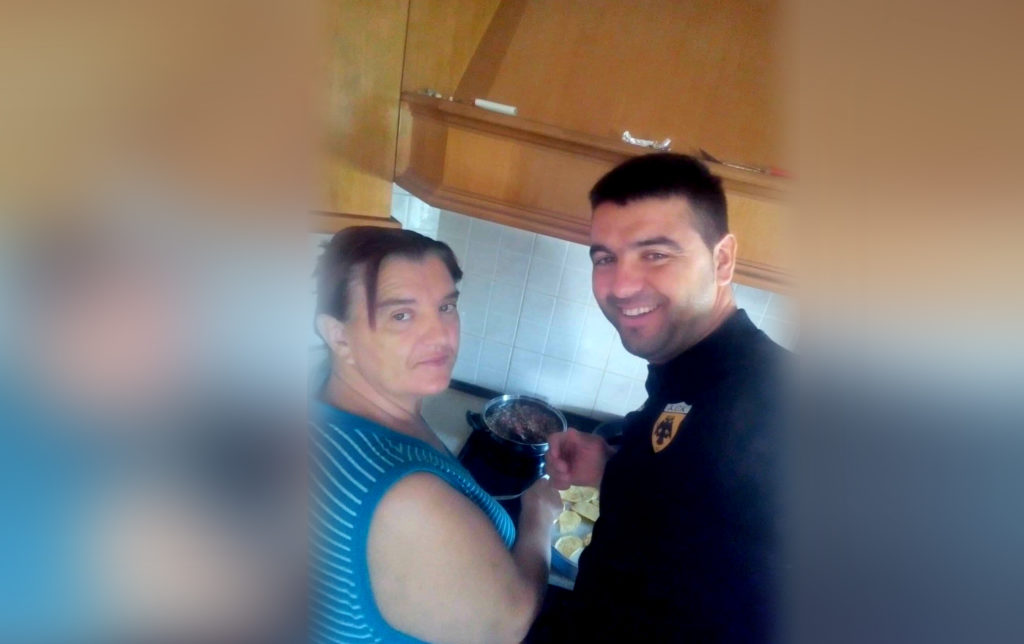 Fire Department: We did not break the woman’s bone…

Aggeliki Nikolouli, in an effort to clarify if the fracture arose in the attempt to remove the body from the river, came into contact with firefighters who participated in the operation with the local police. The answer was negative.
“There is no case. We read it too and we got upset. Not one in a million we caused the fracture. The four people who entered the water carried the corpse very softly. They just lifted from the branches, put it on the stretcher and slowly pulled it off. There was absolutely no pressure on the lifeless body, “they told the reporter.
They also said they did not use rope or other material to pull it out, and that no one touched the neck of the unfortunate woman’s body. For them it was generally an easy unblocking. 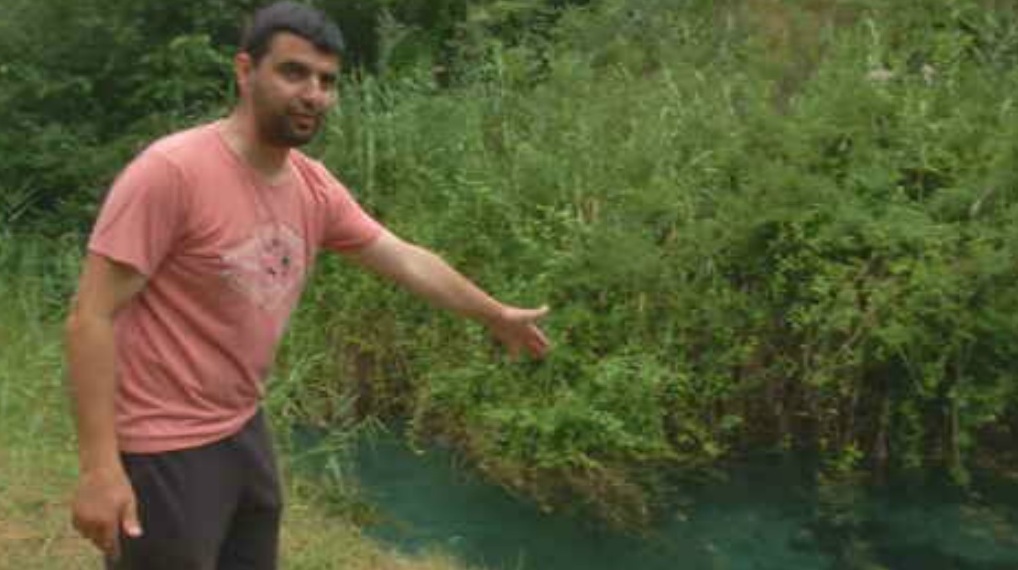 “We want the truth because something happened here …”
The reporter of Tunnel was found along with the son of the unfortunate mother who was looking for her on the show, about 150 meters away  from where she was found dead. The first thing you can see is that the depth of the water does not exceed 40 centimeters.
“Water is flowing, but I do not know whether if someone could drag an object or a man with the weight of my mother. Her slipper, which was found one day after her disappearance, was located even lower at a distance of two hundred meters, “her son said. 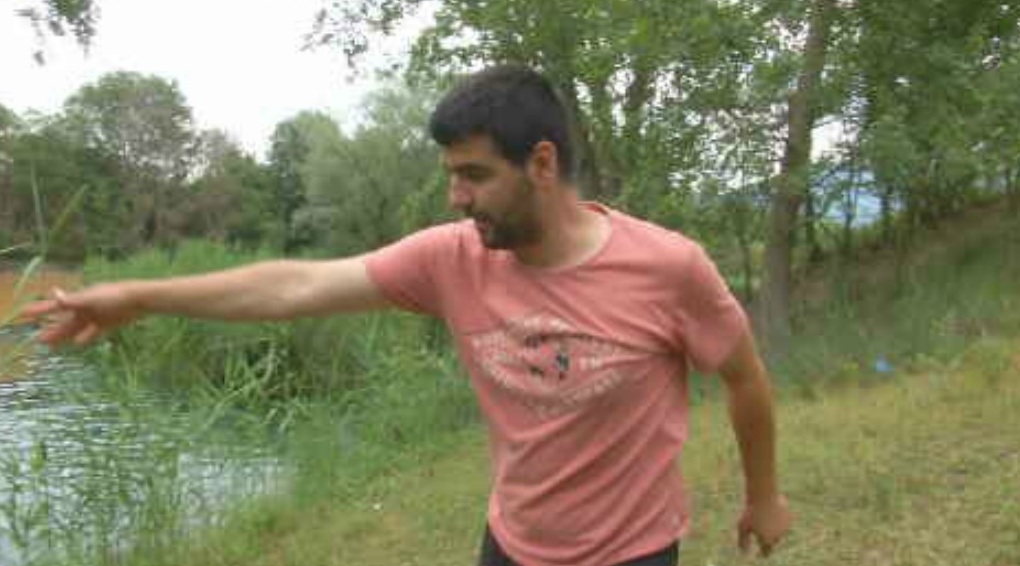 According to Dimitra Zirda  sister something else had happened to her and has not yet been revealed.
“There are many things that do not make sense. Not even the time that she was lost, nor the point where my sister was found. How on erath she walked  alone here? She was afraid even to walk outside my house.  I am sure that something happened and I want the truth to be found, “she said in pain. 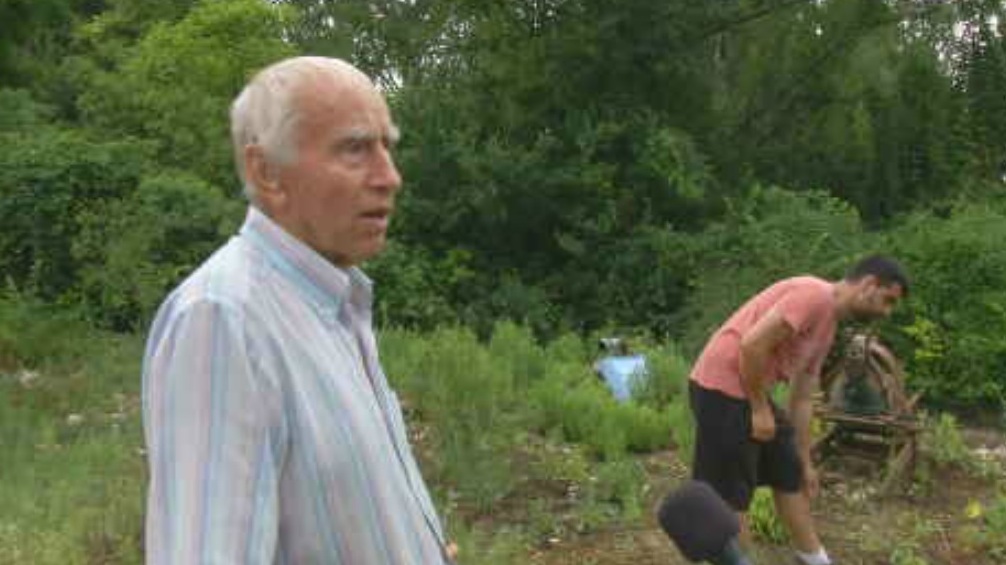 Another witness owner of  the local fish farm, told Tunnel that if the woman wanted to hurt herself, she was more likely to choose the big river despite the place she was found.
“Forty years I live  here and every night I lock the passage with a padlock. I do not think the woman came from Photolivos here to fall, “he said.
Her son added that this point was not searched from the beginning because nobody thought that someone would choose it to fall because it is  shallow.
“In the end, however, her slipper was found at the end of this stream that has nothing to do with the Aggitas River and my mother was found in the middle of it.”
From Fotolivos, this stream is about three kilometers away driving through  the main road.

On the route  of mystery
The son of the unfortunate woman along with the reporter of “Tunnel” followed the route leading to the point that was found in the Simvoli Serres, to the village of Fotolivo of Drama, from where she  was lost.
According to Tasos Dimitriadis, there is a central road connecting the two sites. The location is deserted and at dawn when Dimitra was lost  no one passew by. Very close to where the mother’s body was found is the village Simvoli and the bridge where Mavropotamos is connected with the river Aggitis. This road is rural, asphalted but in poor condition and not busy. 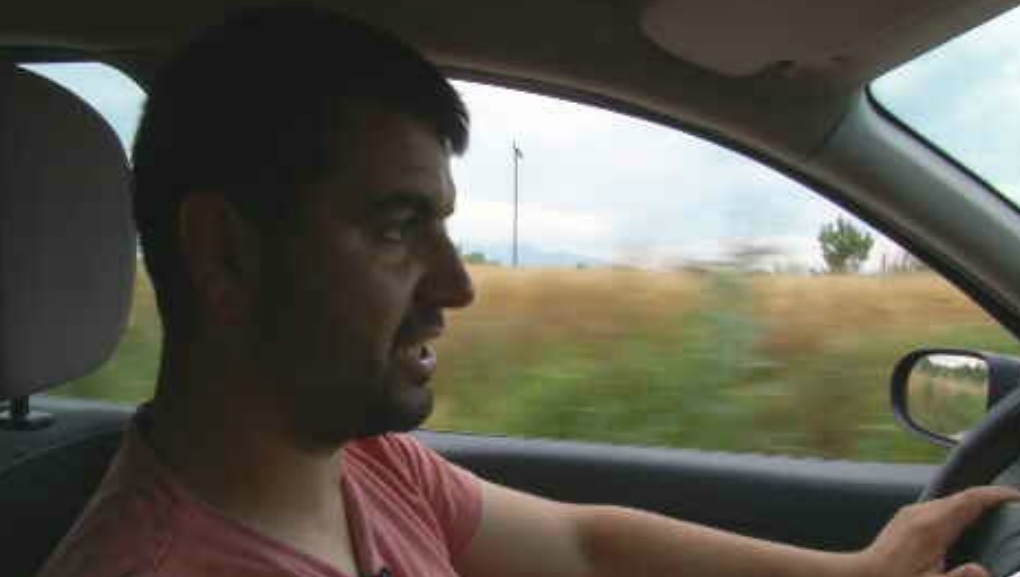 He said there is another dirt road known only by a few, mostly farmers and fishermen from the region, starting from Fotolivos and ending close to Simvoli. It looks more like a trail, extremely difficult and with many obstacles, and he excludes the possibility that his mother would follow it the fatal night that she was lost.
“She probably did not go through this path throughout her life, how much more she knew the hole route. Not one in a million. She did not know … So if we assume that she wanted to put an end to her life falling into the water, she would have been more likely to go to Aggitis, which is very close to the family house in Fotolivo. If that were the case, she  would not be where she was found, “he said.

“They carried her dead …”

“I estimate that the forensic examination should indicate the location of the body and the cadavers. These details you know, often give solutions to crimes. My personal appreciation of the evidence from the report of the show and of the analyzes made by the criminologist, Mr. Bojokas, is that the unfortunate woman was transferred dead to the point where she was found. “

Check out the developments in the case, here.