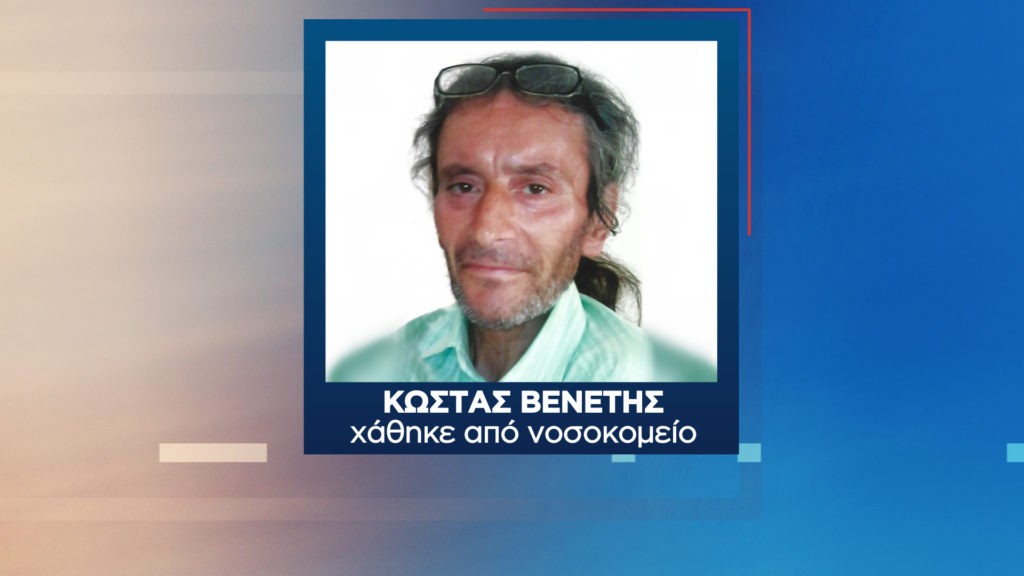 The show returned with a new investigation into the strange case of the man who disappeared from a central hospital in Athens.
Share

The amnesia diagnosed by the doctors after a hit on the head, probably keeps him away from his family, who won’t stop looking for him.

He is Costas Venetis, 53 years old, from Athens, who has been missing since midnight on Thursday, March 30, 2017.

He was transported by EKAB ambulance to the “Evaggelismos” hospital after an accident.

The adventure for his sister started from the same day after they were told from the beginning that he had been pronounced dead… Then they looked for him in the hospital and did not find him. When they realized that he had disappeared from there after the examinations, she asked the police to check the material from the security cameras of both the hospital and neighboring stores to locate his traces. Something that did not happen in time.

Some information shows that Costas Venetis lives as a homeless person in Athens. Others say he was robbed the same night he left the hospital and then disappeared.

The “Tunnel” external investigation team was located in the center of Athens, utilizing the information that reached the call center and led to homeless areas. Costas Venetis, however, was not located.

The man’s sister, who has been missing for nearly four years, expressed her indignation and complaint on the show’s camera.

“I have his photos and I talk to him. He was my life; he was only eleven years old when we lost our father. I raised him. The earth cannot just have opened up and swallowed him. Maybe money was the reason. Others lose their lives for a few euros, my brother had 250 euros with him. Did they kill him? I do not know… The day he disappeared he would meet with a friend. What surprises us is that he fell into contradictions in what he said to the police and to us. An acquaintance of ours saw him beaten that day and treated his wound. From then on, we lost every trace of him and the confusion started with EKAB and the hospitals”, said Costas’ Venetis sister at an emotional state.

“Confusion with the deceased…”

The sister of the missing Venetis became a detective in an attempt to find the end of the thread in the strange case of disappearance. She considered her brother dead, according to what EKAB told her. However, he learned from the social service of the hospital, where he was transported, that he was alive and left secretly.

“At one point I received a registered letter from the hospital saying that my brother was never hospitalized, nor did he go to the outpatient clinics, while I am talking to the doctor and I have in my hands the axial examination that was done to him. I asked why he was let go, while he was diagnosed with peritraumatic amnesia. They replied that they were very busy due to on-call duty”, she stated characteristically.

The show in contact with the hospital tried to find the end of the thread. The picture they gave after their research is as follows:

He was transferred to the Emergency Department and examined by the surgeons of the 4th Surgery. Doctors found head injuries and the tomography showed peritraumatic amnesia.

He was then seen by doctors of other specialties, who referred him for further examinations. Before reaching the ophthalmologist, he disappeared…

Regarding a corpse of unknown details in the morgue of “Evangelismos”, to which his sister referred, it turned out that the body was finally identified and handed over to his relatives.