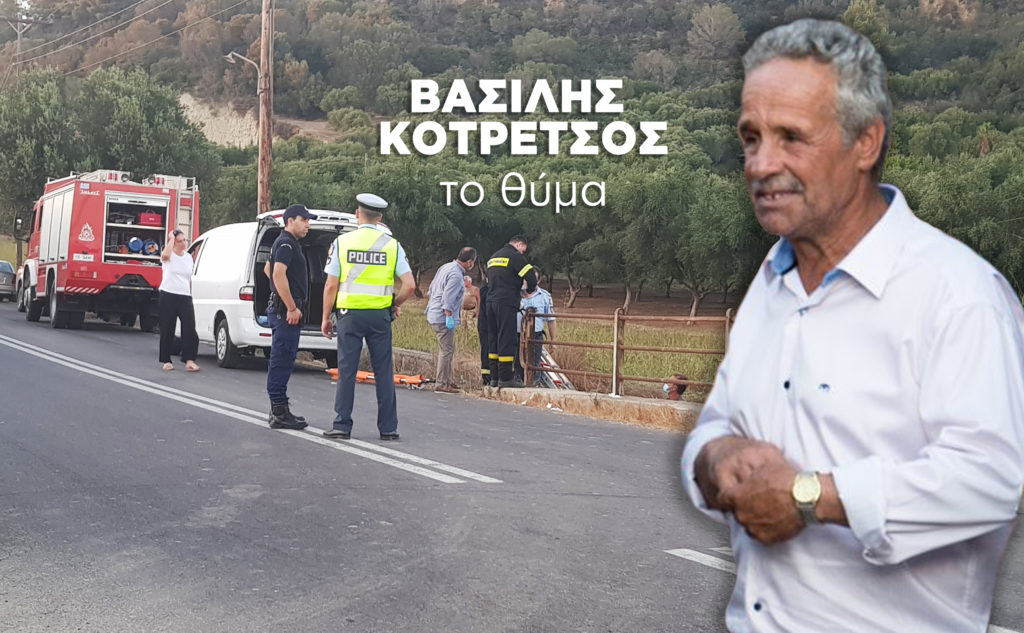 The local community in Skourochori Pyrgos is upset by the strange death of a municipal employee.
Share

He was probably hit by a vehicle, dragged, thrown into an irrigation canal under a small rubbish bridge and left helpless to die.

The relatives of Vassilis Kotretsos, 58, are trying to find witnesses to shed light on the darkness. Let the truth be seen…

The unfortunate municipal employee was found dead on the afternoon of Sunday, August 16, on the provincial road Skourochoriou – Katakolo, by a passerby who lives in the same area.

On the evening of Saturday, August 15, he was returning on foot from the beach of Kavouri where he used to go for a swim.

According to the medical examiner, around 10 in the evening of that day, he was badly beaten and his injuries refer to being hit by a car. His death occurred seven to eleven hours later, which means that the man died helpless.

The slippers he was wearing were found several meters away from the canal in the exact opposite direction, while his swimsuit was not found.

The broken glasses and the mirror that were found at the spot, come from an older incident, as it emerged from the investigation.

The braking traces found there, refer to an older car model, as the expert Costas Hasiotis pointed out on the show.

He argued that the Traffic Police should also investigate the Association of Insurance Companies for a traffic accident at the scene.

The testimony of a woman who was returning with her son from Katakolo to their village on the night of August 15 caused a disturbance on the show. They confused the road and found themselves at the scene. What she described in “Tunnel” is revealing:

“We saw three men getting out of a car and throw something from the bridge. We heard the thud and at first we thought they had thrown away some household appliance. “Let’s leave quickly”, they shouted and left. I realized that they were Roma. Now that I saw the footage on your show, I linked it to the case and if we had approached the point, we would have found him and maybe the man would be alive ….”

The case is being investigated by the Pyrgos Traffic Police. The family, through its lawyer, Gianna Panagopoulou, has filed a lawsuit against unknown to investigate the circumstances of the death of the 58-year-old.

This is not the first tragedy experienced by the victim’s family.

Years ago, the “Tunnel” had searched for his father, 75-year-old Konstantinos Kotretsos, who was found a few days later drowned in the port of Katakolo. Later the mother died and now the son…

Witness: “I found him dead in the garbage…”

Giannis Giannakopoulos found the municipal employee dead in an irrigation canal at a depth of two meters. Shocked, he spoke from the place to a journalist of “Tunnel”.

“I was going to place my bicycle here and I saw the man below. I was shaking. I called the police. I was trying to stop a passing driver to help. Of the ten cars that passed at that time, only two stopped,” he said characteristically.

“He was killed and thrown here in the trash. Since then I have not crossed from the point again, I am afraid”, the witness concluded.

The friend: “They placed him beaten under the bridge…”

The niece and friend of the unfortunate Vassilis Kotretsos, excitedly spoke on the show about their beloved man who, as everything shows, was tortured and left helpless until he died under the bridge.

“He used to go for a walk on foot every day. It is a distance of about forty-five minutes, it was not something strange. They found him at the scene the next afternoon,” said the victim’s niece.

“This man was tortured, he did not die peacefully, bloodstains were found next to him. We cannot let it pass by that way, we ask for Justice to be delivered. We cannot imagine that those who caused it are free,” she added.

She appeals to anyone who knows or saw anything to contact the authorities or the show.

His friend, who recognized him, talks about a peaceful and very generous man.

“It was rumored that he had a lot of money. He told us that some people were going to his house regularly and were asking for money. He was giving and never asking for anything in return, he was helping people with the money he received from his salary.”

“That afternoon we were at my house drinking coffee and after a while he left to go for a swim. Then they called me for recognition. It’s as if they put him there,” he said.

“Let those who know speak…”

“We were not expecting that, no one can believe it. It surprises us all how he found himself where he was”, says characteristically in “Tunnel”, the person in charge of cleaning in the Municipality of Pyrgos, where Vassilis Kotretsos was working.

“He was a very good man, he never hurt anyone and he was very good at his job,” he said for the unfortunate civil servant.

The first cousin of the victim who helped him in the house where he lived alone also spoke on the show.

“I think they put him there. If he was hit by a car, why was he not left on the road? For what reason was he left inside the canal?”

The relatives of the victim appeal to anyone who saw or knows anything to speak so that they get the answers they want.

“I want them to tell me why they did it…”

Voula, the sister of the municipal employee who was found dead in an irrigation canal, spoke to “Tunnel” from their paternal home.

“My brother was not a dog, he should not have been beaten and abandoned.” At least I beg them to notify us anonymously”, she says and appeals to anyone who knows anything to come forward.

“I want to find the person responsible to look him in the eyes and ask him why he did it,” she added.

The victim’s sister responded to what was heard that the victim was well-off and had a lot of money, but also about the possibility of having personal disputes with someone.

“He had his daily wage and some money in the bank. But not these huge sums of money I hear. He had no differences with anyone, but they have to investigate everything.”

The suspicious death of Vassilis Kotretsos was the second tragedy that “hit” the family.

“You had previously looked for our father in the ‘Tunnel’, who disappeared and was later found drowned,” she said at an emotional state. 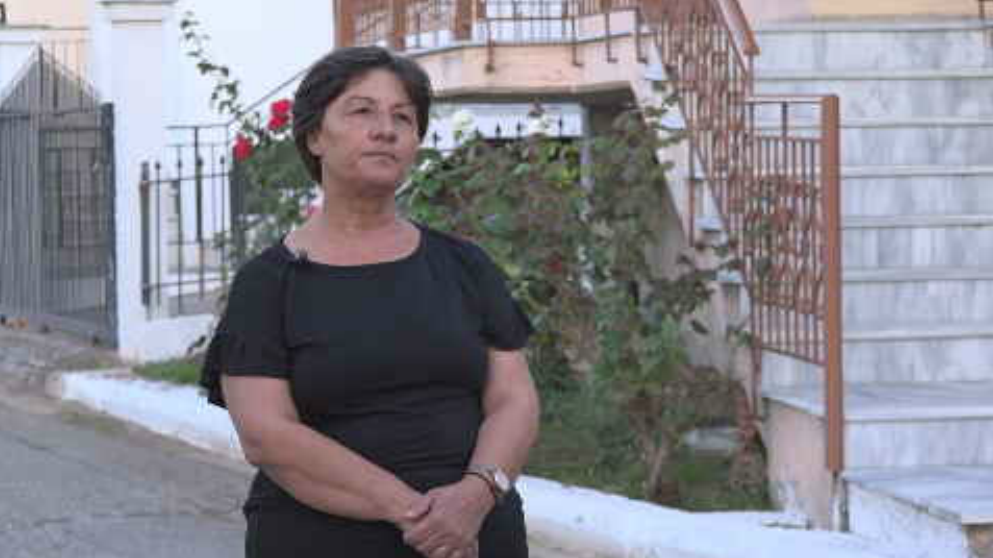 From the studio of the show, the nephew of the victim, Christos Pergaris, at an emotional state, asked for justice to be delivered in order to put an end to the Calvary ​​that the family is going through.

“He was offering to many people, but he would not advertise it… We will do everything to find the culprits. We have sworn in my uncle’s soul…”

Theodoros Diamantis, a retired officer of the Hellenic Police, a criminological analyst and researcher, stressed that something might have happened elsewhere and that he might have been transferred there.

The family’s technical advisor and medical examiner, Socrates Tsantiris, stated that the most serious injuries are from the middle of the body and above.

“Criminal action cannot be ruled out with these data we have,” he stressed.