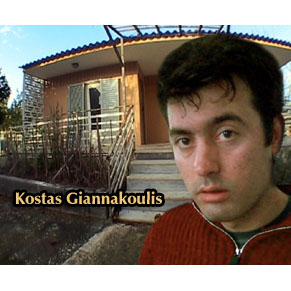 On Friday, January 7th of 2011 a shocking and revealing "Tunnel" was broadcast.
Share

The crew of the show was doing a research in Loutsa, about the disappearance of 34 year-old Kostas Panagoulis, house-builder from Ilia, who lived at the same area. His traces were lost mysteriously on December 6th of 2010. At the research we made at the old detached house he was renting, his family received the most tragic news. The camera of the show, when it entered at the old store-room situated at the courtyard of the house, pictured the scenery of death. The missing man dead for about a month, lying on an old bed made of steel in embryoid position and beside him a barrel which was used as a brazier. What followed cannot be described. His sister Eleni who was searching Attica all that time, didn’t want to believe that the body at the store- room belonged to her brother. Journalist of the show called the police who hadn’t made a research in the house even though there were many secret parts in that mysterious disappearance. His car was found at the area of Loutsa and seemed to have been moved by someone. His girlfriend, with whom he had recently separated, didn’t participate at the researches and didn’t inform the family on time about the disappearance. The thorough investigation that was made afterwards, didn’t show any signs of criminal action.