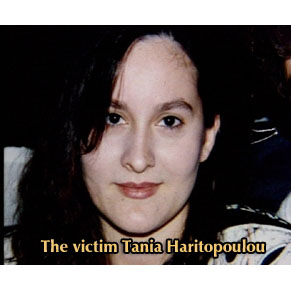 Soultana (Tania) Haritopoulou was murdered by her boyfriend Spyros Kavadias, on August 22nd of 1998, at night.
Share

He got rid of her body that until today hasn’t been found. Tania aged 27 lived in Polychni of Thessaloniki with Spyros Kavadias who was 15 years older than her and their 3 year- old daughter Vasiliki. According to the testimony of the little girl, her parents ‘had a serious fight and daddy started pulling mum’s hair. She started crying and screaming. Then, he put her to bed, he placed two pillows on her face and mum fell asleep’. He reported her disappearance to the police claiming that she left him for another man. The relatives of the young woman arrived at ‘Tunnel’, her parents, her brother with his wife, anxious of her disappearance. Angeliki’s Nikolouli research at the rented house from which Tania went missing, was revealing. At the bathtub of the empty house, the journalist found traces of blood and under the toilet lid parts of the dead body that the owner said it was ‘rust’. The material was given to the laboratories of the police and it was proved that it was part of the woman’s body. ..Policemen had already investigated the house twice but they hadn’t paid attention to that. This information and everything the show revealed about Kavadias’ action, led to his arrest and condemnation even though the body was never found. Witnesses from the neighborhood had heard Tania screaming that night, asking for help. The next day they saw the suspect getting out of the house, putting garbage bags in his car, probably with Tania’s chopped body inside them. He visited his sister, left the child there and revealed that he had killed Tania because he was jealous of her and was also afraid that she might abandon him, taking the little girl with her. She told her ‘even if 200 years pass, they will never find her’.

He had also murdered his ex-girlfriend

‘Tunnel’ revealed the former murder he had committed in Switzerland, when he killed his ex-girlfriend. Swiss policemen told the show that he was abusing Nikol Kirchner. They lived together for seven years. When she was transferred at a centre for abused women, he managed to find her and killed her. With false identity, wearing wigs, he arrived in Greece pretending to be a rich businessman and that was when he met Tania. Angeliki Nikolouli managed to take an interview from him while he was in the prison of Thessaloniki. His contradictions, his criminal profile and the lack of compassion for the two women he had killed, were impressive. Kavadias never confessed the murders he had committed. The first court found him innocent but the second one which took place after the Prosecutor’s appeal, condemned him to lifetime imprisonment. In Greece, he has been also condemned for the murder of his Swiss girlfriend. While he is in prison, he didn’t hesitate to adduce a document from a bank in Ukraine that ‘had Tania’s signature’, so as to prove that she is alive. He didn’t know that the show had connections in Ukraine and could reveal his fraud, since the signature was fake. 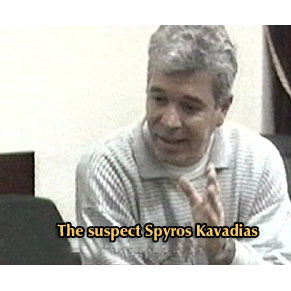