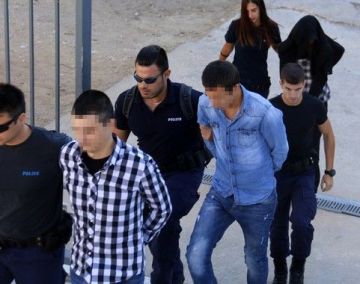 Guilty were found by the Mixed Jury Court of Athens, Stanislav Bakartziev and Nikolai Achmentof for the murder of little Annie.
Share

Annies mother was found guilty for the offense of minor exposures felony by the majority of the Court, while earlier the president of the Court and two jurors asked her innocence . For the charge of perjury she was found innocent.

The Mixed Jury Court announced its decision on Tuesday, October 11, after several days of hearing that lasted more than a month.

More specifically, the father of the little girl, was found unanimously guilty of the offenses of homicide intentionally within complicity of verbal outrage dead, illegal use of weapons and inciting perjury.

Unanimously judged guilty his friend Nikolai, for the offenses of murder with intent, the verbal outrage dead and illegal use of weapons.

Guilty of perjury was found the owner of the apartment who had filed that Aaniw was at his house.

The prosecutor Maria Demetriades, who had proposed the discharge of Annies mother, asked to recognized mitigating non humble causes. Accept that she went to Germany to give a perspective to her and her child, she said.

Savvas defense lawyer asked did not ask any mitigating. While defense lawyer of Nikolai asked the Court to recognize the attenuating the leading honest lives and practical repentance arguing that helped in solving the crime. The prosecutor, however, suggested not recognize any mitigating for the defendants because they appeared unrepentant, cold and dispassionate.

The court at this time is deciding whether to recognize exonerating for the accused.