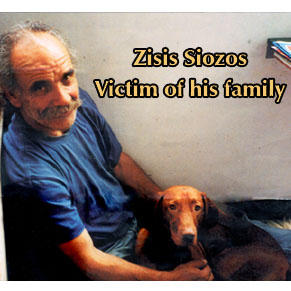 On July 19th 2009, public opinion was shocked from the revelation that the mother killed her husband and with the help of her children, got rid of his body and directed his disappearance.
Share

How ‘Tunnel’ spotted them

The TV show made a research on the case of Grevena on Friday, April 3rd. 57 year- old householder Zisis Siozos who was living in Germany, went missing on July 16th, 2008 from Dotsiko of Grevena where he was spending his holiday with his wife and his two children aged 20 and 18. Their relationship was very bad at that time mainly because the father was unemployed, fact that had made him bad- tempered and importunate. The day he disappeared, he previously had a fight with his wife. His family claimed that he left home so as to go to the mountain for a walk but he never got back. The research of the Authorities and Special Forces, that searched every inch of the area, had no result. The wife and the children left for their house in Colony of Germany without informing his brothers about his disappearance. Everyone believed that something bad had happened and seek for the truth in ‘Tunnel’. The serious contradictions at the testimonies of his wife and his children at the TV show were the beginning of the case’s detection. Angeliki Nikolouli was often taking by surprise the wife, the son and the daughter and was talking with them on the phone about the fatal night. As the time was going by, mainly the children had forgotten basic details and were saying contradictory things about the fight and where they found their father when they returned home. When the wife said that she would again go on holiday at the house of Dotsiko, the journalist informed the local police that arrested them and extorted their confession.