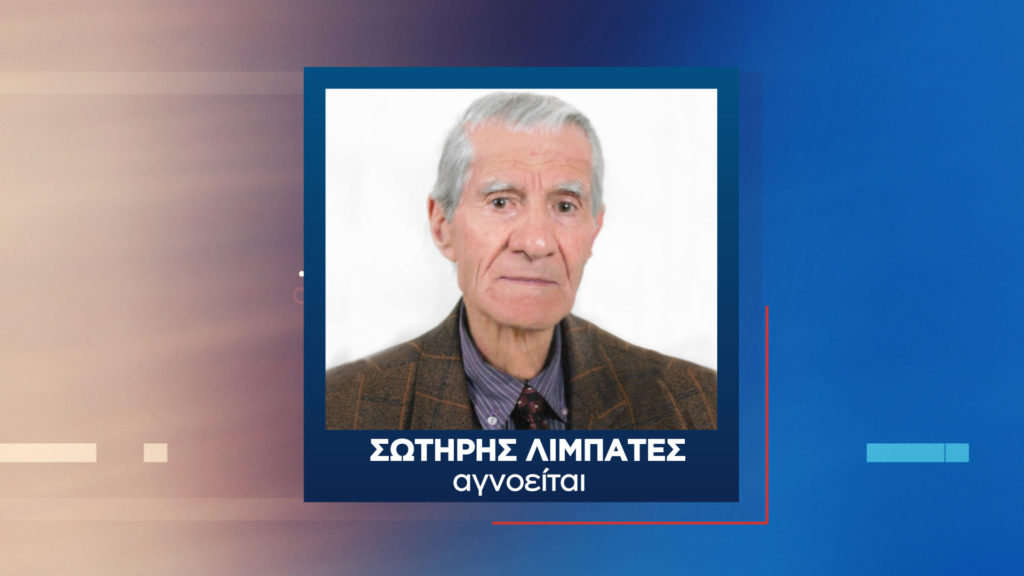 The missed calls at night, the strange routes, the scattered money and the open balcony door, compose the scene of the new thriller that the "Tunnel" investigated.
Share

The car was seen shortly before midnight parked outside his house, in the area of Drimos, Oreokastro.

In the morning it was found hit and abandoned near the “TITAN” factory in Efkarpia. It was unlocked and the keys were on the engine. The driver, is missing…

He is Sotiris Limbates, a retired motorist and farmer, who has been missing since the night of Wednesday, September 9th.

His three sons filed a lawsuit through their lawyer Anastasios Dougas, for murder and kidnapping.

The on-site investigation of the “Tunnel” is revealing…

“Something serious happened that took him out of the house…”

The son of the missing person, who lived in the same building with his father, spoke to the camera of “Tunnel” about the hours of agony that he and his brothers are living, as they do not have a single sign of life from him.

“When I got home that night, my father’s car was parked in the yard. The next morning I was told that it was found somewhere abandoned. None of us heard him leaving. Our minds go to the worst. “We are at point zero in terms of research”, he said.

The lawyer of the family, speaking to the journalist of the show, stressed:

“We have filed a lawsuit for murder and kidnapping. There is all the evidence and the objective and subjective nature of these crimes. We believe that something bad has happened. In order for the missing person to suddenly leave his house, something happened that forced him to leave at night… ”

“Nobody is coming here at that time…”

One of the three sons of the missing person spoke from the place where his car was found abandoned.

“The police called me in the morning to come and get it. It was open with the keys up and all the documents inside. We do not know if he was driving himself or what exactly happened. We are kept in the dark. We searched the wider area, but to no avail. All possibilities are open, we cannot rule out anything,” he said.

“No one comes up here at night,” a farm owner in the area told Tunnel. “We searched the surrounding area, but did not find anything,” he concluded.

Mystery with the money and the car…

“He would hide his money well. At home, however, around 1,200 euros were found in a prominent place and this surprises us,” the family lawyer told “Tunnel”.

“They called me from the police and asked me if I knew where my father was. I was shocked at that time. When we got home to look, we were impressed that the fan was turned on, as was the balcony door to his room. Something pushed him to leave,” said one of Sotiris Limbates’ sons.

However, the calls made to the missing person’s mobile phone are also a mystery.

“We found several unanswered questions late at night from a friend, but he does not admit it,” he added.

“We are concerned about the fact that while he had recently received his pension from the postman, he withdrew a large sum of money in the previous days,” he concluded.

Volunteers: “We scanned the area, but did not find him…”

“We did not notice anything strange in his behavior, he was very normal, but it seemed that something was bothering him. We were together in the cafe and two days later we saw that they were looking for him. We all wonder what may have happened, it is very mysterious”, say the friend of the missing person and the owner of the cafe who was with him on the night of the disappearance.

The volunteers who assisted in the search for Sotiris Limbates spoke to the camera of “Tunnel”.

“We swept the whole area with hiking units, with a Drone and with a specially trained dog, in collaboration with the Police Department of Oreokastro. However, efforts to locate him were unsuccessful. ”

“Something may have happened elsewhere and they left the car there to show that he lost his orientation and left it on the spot,” said the family lawyer.

“Why did he come to our village before he disappeared?”

The owner of the tavern that Sotiris Limbates used to frequently visit, spoke to “Tunnel” about an incident that impressed her.

“He used to come here with two acquaintances every night. He was a bit stingy, everyone was paying their own bills. He argued with them and did not come again. In fact, he passed by the last two nights with his car and did not stop. On the night of Wednesday that he was lost, one of them sees him passing by and tells me… “stop him”. I went out on the street and waived him to stop, but he did not turn to tell me anything and continued on his way. It was about 10 to 10.30 in the night. “His friend left shortly after, around 11. These two nights, why was he coming to the village?”, she wondered.

“I hear people say he was saving his money. Did some people know he had money?” she concluded.

Toll booth employee: “I saw him before he disappeared…”

The “Tunnel” located and spoke with the employee at the Analipseos – Lagada tolls, who is said to be the last person who spoke with the missing person before he disappeared.

“He passed by that night around 12:05 in the direction towards Kavala. He had no money with him; he looked a little confused because he had missed the exit. It was also quite late. I went out, talked to him and explained to him how to return from the next junction of the Egnatia Odos to go towards Thessaloniki. I calmed him down. A little later he went through the tolls again. I did not find anything else strange,” he said on the show.

Friend: “Why would you kill him?”

The “Tunnel” spoke with the friend of the missing person, who did not seem particularly willing to assist in the investigation.

“I do not want to make statements, I do not care, I just can’t…”

At the insistence of the journalist, the witness said:

“He came to Monolofos the night he got lost, it is a small village up here, 7 kilometers away. There is a tavern there. He passed by the car but did not stop. The same thing had happened the previous night. I saw him coming down and called him from my phone. ”

He also referred to some frictions he had with Sotiris Limbates:

“What he used to say about me it cannot be said. He blamed me, because we were supporting rival political parties. We had been fighting for days for something insignificant. He was almost meaning nothing to me. Do not look for criminal act, there is not such a thing here. What he did is a matter of his own. I do not even know what else to say. Why would you kill him? What to do with him?” he concluded.