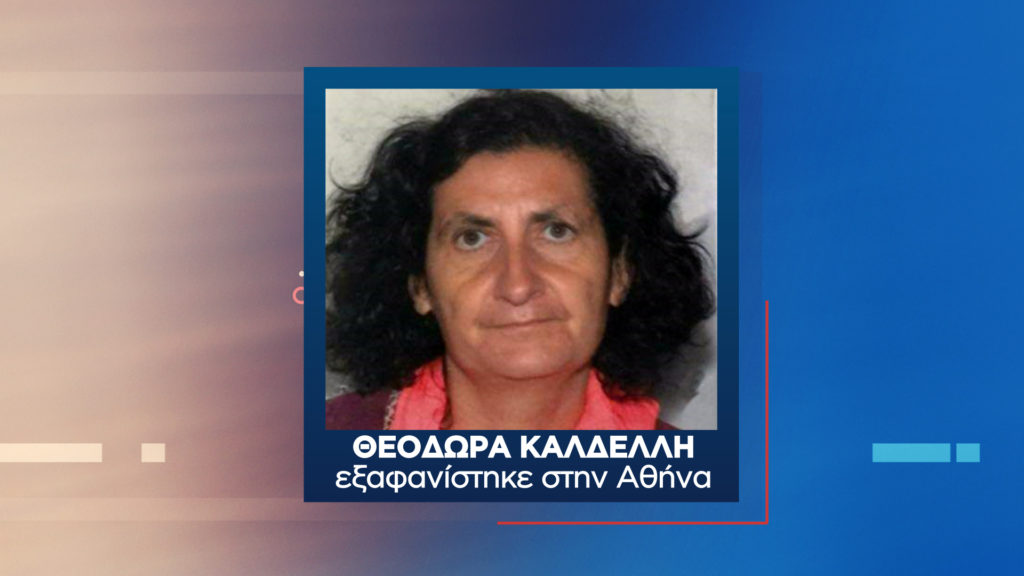 The overthrow of the strange disappearance of the woman from Mytilene, was caused by an important testimony in the "Tunnel".
Share

Theodora Kaldelli, 47, who is facing health problems, came from Polichnitos to Athens and most likely disappeared on Wednesday, October 28.

Then she spoke for the last time with an acquaintance on the island and told her that she was in a square, because her personal belongings and her bank card had been stolen.

The woman told her to go to her sister in Hagia Sophia in Piraeus, where she would wait for her to pay for the taxi and host her. Theodora, however, never got there and a few minutes after their conversation, her mobile phone was turned off.

A witness who contacted the show, said that a cleaner in the Port of Piraeus located a black suitcase in front of toilets located at the E2 gate and alerted her.

According to her, clothes, the identity card and some photos of the missing person were found in the suitcase.

“I had found her suitcase in E2 and I was looking for phone numbers. I found some and tried to call them, but they were not valid. Then I handed it over to the Port Authority. In the last few days, both I and the cleaner who found the suitcase, we keep our eyes open, if we can see the woman, but we have not found anything,” she said.

A Coast Guard officer, after searching the diary, confirmed to “Tunnel” that Kaldelli’s suitcase was found at 08.40 on the morning of Saturday, October 31.

Everything shows that the woman is wandering somewhere in Piraeus like homeless, without documents and money and needs help.

Her parents have died, she has no relatives and the closest person to her, is Father Savvas Katrakazas, who also declared the disappearance at the police.

Speaking on the show, he appealed to anyone who sees Theodora, to help her because she is in great need.

She has a height of 1.60 and Missing Alert has been activated for her disappearance by the “Smile of the Child”.