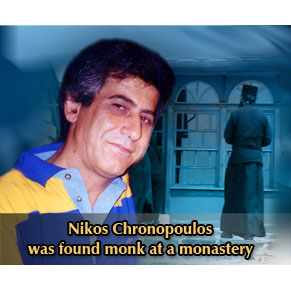 On Friday, February 3rd of 2006, 'Tunnel' presented the weird disappearance of the owner of a fish tavern in Epitalio of Pyrgos.
Share

It’s the 46 year- old Nikos Chronopoulos, an active and social resident, who suddenly went missing on October of 2001, leaving behind him an apologizing note to his family. Nikos Chronopoulos was found and talked with his niece who was looking for him, during the live broadcast. He is not an active, social businessman anymore, he is monk Prodromos who lives at the monastery of an island and has frequent communication with his family.