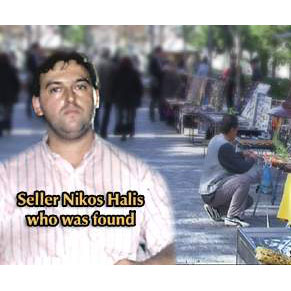 On January of 2004 he left the house that his family was staying, in the area of Neos Kosmos and never came back. He only took with him the products he would sell at the markets of Halandri, Glyfada, Piraeus and Athens. All those years, his tragic mother was waiting to receive a phone call from her missing son. The information the viewers gave to the show on Friday, January 14th of 2011, was saying that Nikos Halis was weak and homeless, wandering at the areas of Piraeus and Elefsina. They made volunteer researches to spot him. The good news was given by a viewer who works at the commons of the church of Holy Mary at Perivolaki of Nikaia. She contacted ‘Tunnel’ having homeless Nikos by her side who talked with his mother and sister after seven years.