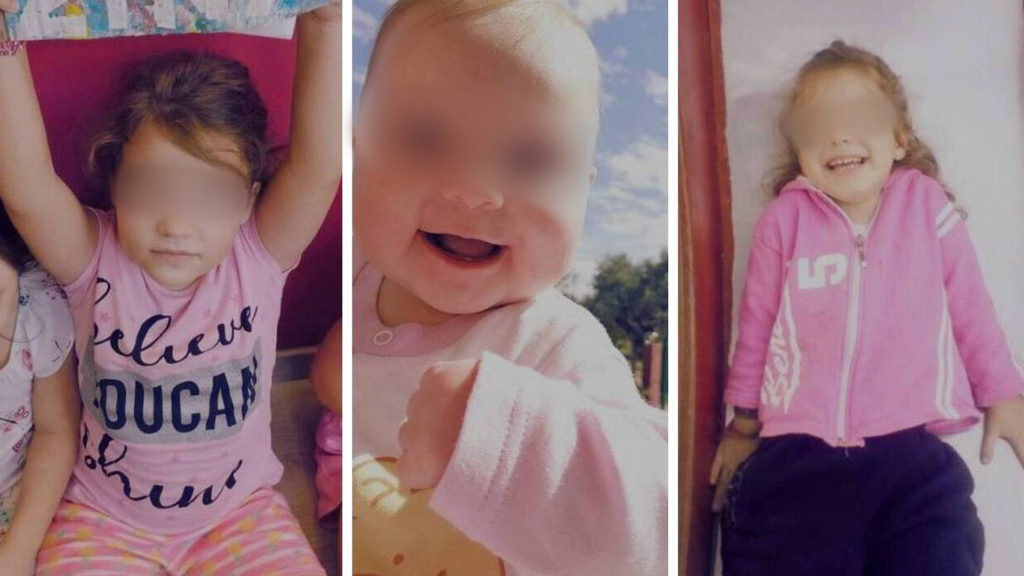 The revelations of "Tunnel" brought a reversal in the much acclaimed case of Patras with the three dead siblings.
Share

Continuing its deep and methodical research on this thriller, the show identified new witnesses, spoke with expert scientists, but also with the mother of the unfortunate girls, who agreed to answer all the questions.

Evidence that subverts the data…

The testimony that caused horror, changed the image that exists until today about the conditions under which the baby of the family was found dead in his crib.

The witness, who is made available to the authorities, claimed to Angeliki Nikolouli that the mother herself, at an unsuspecting time, told him everything that happened.

“When I told my mother that Georgina needed help from a specialist, she told me that ‘she is a strong child and she can stand it. “She found her sister dead in the crib and she did not suffer anything,” she told me uneasily, while I was in shock. He described it as if he had read it in a book. “It was like talking about others,” the witness said.

“Georgina told me that her sisters are in the cemetery…”

Angeliki Nikolouli found the witness who was talking on the phone with her mother while little Georgina was suffering from the first obstruction at the Karamandan Pediatric Hospital.

“I was talking on the phone with Roula. I was listening to the machine that Georgina was connected to. I tell her “what happens?”. She tells me her oxygen is falling. I was worried. Shut up, she tells me and I answered her to call the doctors. Where could I imagine what would happen… »

After about an hour he called the mother in order to learn more about the child’s health. Roula was in a panic, as she reports and told her that the child was opposed.

The mother’s witness and friend speaks excitedly about Georgina, saying how much he loved her, how smart she was, but at the same time how sad she was to have lost her two little sisters.

“I had this child as my own. You can not imagine what creature we are talking about. We were passing by the cemetery in front and he was telling me here are my sisters. Here are the girls… »

The deterioration of Georgina’s health, as she reports, was rapid. The witness who speaks in the “Tunnel” about the last moments of the 9-year-old girl, can still not believe this tragic development.

“Georgina and I talked on video. The last time we talked was on Sunday afternoon, just before the opposition. She was down, turned to the side and sluggish. I did not have a good feeling. I do not think that has happened. I have not realized it yet. ”

Aunt: What happened at night and in the morning with the baby…

The mother’s sister from Patras spoke to Angeliki Nikolouli about what happened that fateful night, but also what followed.

“Usually when the baby woke up, Roula fed him immediately. But that night he put the pacifier on her, she stopped crying and we slept again. That’s why at 11:30 in the morning, he was preparing the cream instead of milk, because the time had passed. Georgina woke up to her mother’s voices. We have no picture of the time the baby died.

She also gave answers about the cloth with the blood that was found in the baby crib.

“We came home and went straight to the crib because Roula wanted to enter the child’s room. They saw the baby’s cloth and gave it to me to hand over to the police. They in turn would give it to the medical examiner. I got a call from the police the same afternoon and they told us not to disturb the room because the next day a ladder from the forensic would come. They took photos and left. “Georgina was not there at the time, we had given her to a family friend for a while to play,” the aunt of the three unfortunate girls told the journalist.

The mother of three children from Patras, in a testimony of soul to Angeliki Nikolouli, talked about everything. She gave answers about what they accuse her of, Minhausen Syndrome but also the reason why she did not continue to a psychiatrist, as suggested to her by the hospital…

“Roula, did you ask if there are cameras in Karamandaneio, in the single you were in?”, The journalist asked with the mother giving a clear answer: “First it was not single, let’s clarify them one by one. I had two more beds next to me, but due to coronavirus they had not put other children. I was alone and going down to get food. I asked if she has cameras because she was another mom here and there gypsies and gypsies and I was scared. “Let’s see who comes in.… Because I had a laptop and a tablet for Georgina.”

When Angeliki Nikolouli referred to her mother’s refusal to go to a psychiatrist, she reacted:

“I’m really laughing at this thing. I went. Do you know what he was asking me? If I see fires and if I see people with red eyes. “He was telling me some strange things that were unreal.”

According to the mother, Georgina complained to the doctors that she could not breathe “my belly, my back, I can not”.

“Was it psychological? “Because she had seen her sisters disappear?” The journalist asks. “At first they told me psychologically too. That’s why they wanted to oust her. But when she started vomiting, they kept her and then turned her into gastrointestinal, bronchopneumonia and obstruction. “Tell me, how do you explain that?”

Georgina was a very strong child, as the mother says, but maybe the death of the baby cost her a lot because she took care of it. He did not see Malena in distress, he saw her only once in “Elpida”. We tried not to see the baby, but she was very smart and she understood. ”

Speaking about her relationship with her husband and responding to those who say they were divorced, she emphasizes: “Yes, it is true. Two days apart. Of course they support each other. “I have the support of my husband and he has mine.”

Referring to Minhausen Syndrome, she replied: “It does not apply to us in any case. This, from what I understand, is that you are causing something to make them feel sorry for you. Did I cause cancer? It can not be done! Did I cause the baby his heart? Now to Georgina trying to throw it there? I think they would find it from the first moment. I believe that everything is detected “.

The mother of the three unfortunate girls, answering to Angeliki Nikolouli about the course of the investigations, said:

“We’ll see. The toxicological ones will come out and all this will stop. ”

“Since they say they were suspicious, why did they not notify about cameras?”

The mother also referred to the cameras, which were never placed in the room of her 9-year-old daughter, leaving spikes against the doctors.

“A doctor came out and said that they were thinking of installing cameras, but they drove the child to Athens and did not notify the hospital he would go to to make up their minds. If they were so suspicious, why didn’t they do it? “Since everyone was suspicious, why didn’t they keep the child in the ICU and get the Prosecutor’s permission to put cameras in?” He wondered.

She also referred to the results of the genetic test and the joint memorial service of her three children.

“The doctor from Onassis for the cardiological genes told us that they are negative. But the pulmonology has not come out yet. Sunday is the children’s memorial. Georgina’s 40, baby’s time and Malena’s three… »

“Open book” on social media the mother of the children…

The posts on social media of a mother, who lost all three of her little girls to sudden death in just two and a half years, are problematic.

The mother who today demands that her targeting be stopped and that everyone wait for the results of the research, wrote in a post in 2019 about the parents of a 2.5-year-old boy who was crushed by a mattress, finding a suffocating death:

“Well, the angel is where he is. But did they fall asleep in the afternoon and wake up at 5 in the morning for milk? Do not children eat dinner? And who sleeps with two children from the afternoon? What can I really say… »

A tragic irony is the fact that little Iris died in her crib when she fell asleep at night and was found dead at 11.30 the next morning…

In December 2020, the mother of three children is particularly critical of the imminent release of another young mother, who left her newborn baby girl on the beach of Agyia in Patras, as a result of which she died of drowning. He wrote then…

“Congratulations to the Greek Justice… I wonder this female how she may not have even committed suicide out of remorse. The lady will now go out, make a living with coffees, drinks, etc. and her soul is lost forever. ”

The 33-year-old mother often shares her thoughts with online strangers asking for their opinion. She publishes her concerns about whether other women have noticed changes in their husband’s behavior in relation to pregnancy.

She seems to trust members of online groups for all her health problems, from intolerance to… a specific case of ovarian cancer.

Her posts, presented in the “Tunnel”, are revealing.

The two focal points of the research…

The investigations of the experienced police officers of the Homicide Department of the Attica Security are expected to be decisive for the much-praised case of the deaths of the three little girls in Patras. From the information so far, they seem to be moving in two directions to consolidate the data.

Initially in the results of the toxicological and histopathological examinations made from the samples taken from the 9-year-old, who recently passed away. It will take time and persistent analysis to give a more complete picture. Each finding from the first answers that have emerged for the drugs that have been found in the little girl’s blood, are compared with the clinical picture that she had, the drugs that she had received or not, but also their quantities.

The analysis continues in a broad light for the detection of any heavy metals and other toxic substances and bases used in poisons. Especially with regard to the former, there are substances such as potassium that pre-exist in the body. Exogenous additional administration can cause serious neurological and cardiac side effects, even death.

The other direction that the Authorities seem to focus on is the testimonies they receive from all the scientists, doctors, medical examiners and nursing staff involved.

Demosthenes Avramidis, cardiologist – pediatric cardiologist, in charge of the “Mother” hospital, speaking to a journalist of the “Tunnel”, said that the agenesis of the sinus node as an isolated disease, can rarely lead to death.

The same applies in case of sinus node dysfunction. In order for death to occur suddenly, there must be another heart disease that will aggravate the condition.

Sinus agenesis is easily detected by a simple cardiological examination of the newborn by a pediatrician or cardiologist, which makes the condition treatable.

Another reason that this very rare disease can not lead to death is the fact that the heart has the ability to pump the electrical stimulus needed to function, from other sources.